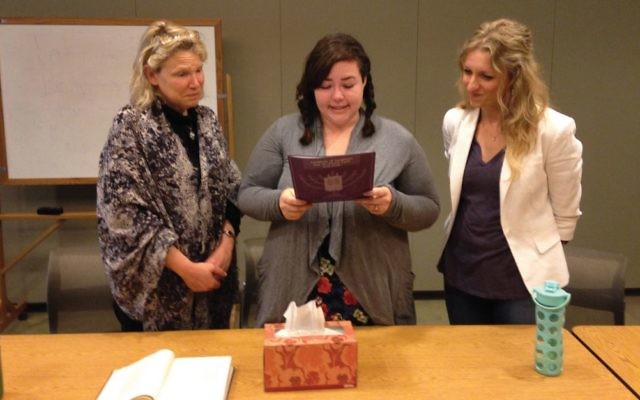 A convert, center, reads her declaration of faith as she converts to Judaism during a 2014 ceremony at the Academy for Jewish Religion. JTA

The Chief Rabbinate of Israel never met Janet, a board member of an Upper East Side synagogue.

But her recent conversion to Judaism sheds some light on an overlooked dimension of the bitter political fight pitting Israel’s religious establishment against Reform and Conservative rabbis in the U.S. over Who is a Jew: the actual conversion process itself, with all its attendant idiosyncrasies.

Must one observe all of the relevant mitzvot of the 613 enumerated by the sages of old? And if so, to what degree? The criteria differ between and even within the different religious streams of Judaism.

Janet, a millennial, showed up with her then-boyfriend at the study of Rabbi Rachel Ain a few years ago with conversion on her mind.

Raised in a nominally Christian home, Janet was interested in becoming Jewish. Her Jewish boyfriend supported her interest.

Rabbi Ain, spiritual leader since 2012 of Sutton Place Synagogue, steered Janet (not her real name) to an introduction-to-Judaism course under the auspices of the Conservative movement’s Rabbinical Assembly. For the next year Janet studied the basics of the Jewish religion, regularly attended Shabbat services, took part in the cycle of Jewish holidays and met with the rabbi to discuss her continuing interest in Judaism. 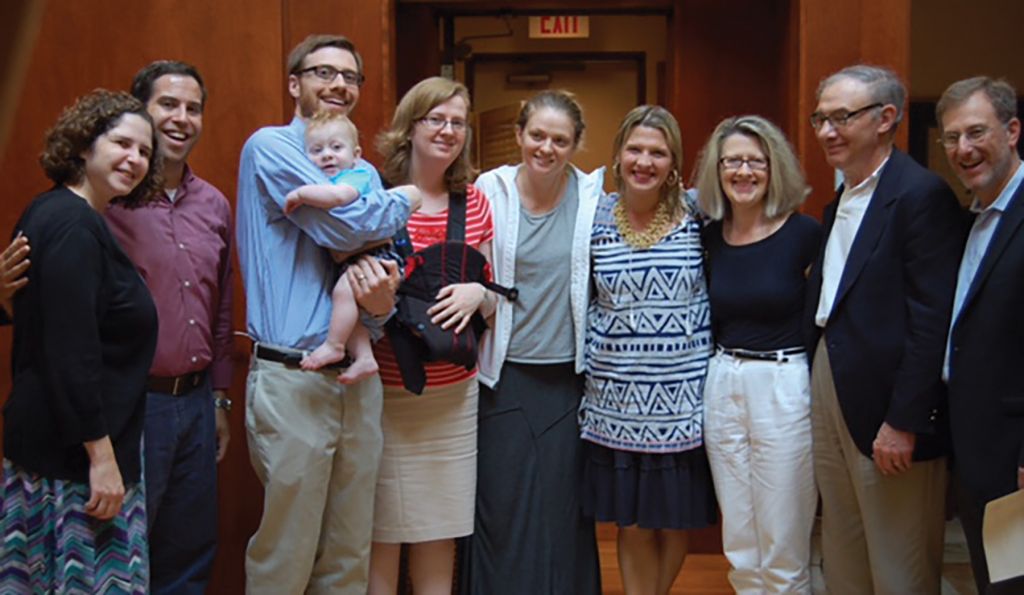 A convert, center in blue shirt with triangles, celebrating with family, friends and clergy from Temple Sinai, a Reform synagogue in Brookline, Mass., after her 2014 conversion ceremony.

Finally, Janet stepped before a religious court of three rabbis who inquired about her sincerity and knowledge; she immersed herself in a mikveh, chose a Hebrew name for herself and joined the Jewish people.

Janet, now married to her boyfriend, has become “a very active member” of Sutton Place Synagogue, helping to lead Friday evening worship services and serving on the synagogue board, Rabbi Ain said. While the rabbi admits that she doesn’t “have a checklist” of mitzvot that Janet must follow, she said Janet “takes her Judaism very seriously.”

Despite that, Janet probably would not be recognized as a Jew if she moved to Israel, as a Chief Rabbinate that has been pushing to the right for some years is toughening the conversion standards in a way that has fueled the current controversy. Nor would any of the “about 50” men and women whose conversions Rabbi Ain has supervised be recognized as Jewish.

Rabbi Ain is not on the so-called blacklist, maintained by Israel’s Chief Rabbinate, of 160 rabbis from several countries whose letters testifying to someone’s Jewish identity were rejected by the Rabbinate. “I don’t know if it’s because I’m a woman or because I’m Conservative,” she said.

The list, which was obtained earlier this month under Israel’s Freedom of Information Act by the Jerusalem-based ITIM advocacy organization, is not directly tied to conversions; rather, it is tied to the reliability of the rabbis, from both Orthodox and non-Orthodox backgrounds. And the blacklist — along with a recent decision by Israel’s cabinet to fast-track a bill that would nullify all non-Orthodox conversions — is the latest reminder of the shifting and sometimes unclear standards that increasingly pit Israel’s largely charedi religious establishment against large parts of diaspora Jewry and leading members of Israel’s Religious Zionist circles. 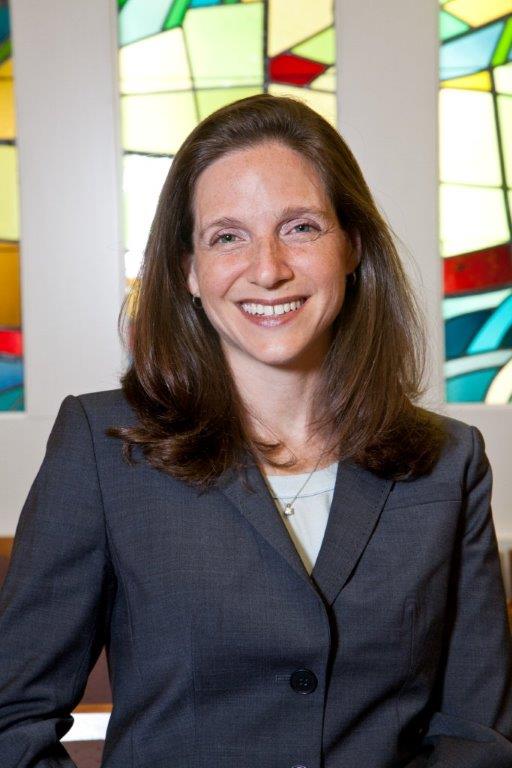 If a rabbi is on the blacklist, he or she is unlikely to be accepted as fit to conduct a conversion.

At the center of the newest controversy is the conversion process itself, whose procedures and rabbinic requirements can appear arbitrary.

The procedures differ both within Orthodox Judaism, and between the Orthodox and non-Orthodox branches. While rabbis of all denominations agree on the basics of what is required of prospective converts — those requirements are contained in the Talmud and Shulchan Aruch code of Jewish law — they part company on the specifics.

While rabbis of all denominations agree on the basics of what is required of prospective converts, they part company on the specifics.

The major branches of Judaism all expect prospective converts to engage in a period of study of the Jewish religion and wider Jewish culture, to declare their commitment to Judaism and to immerse in the mikvah (for women) or, for men, to undergo brit milah [circumcision].

The Reform movement’s Central Conference of American Rabbis does not have a denomination-wide set of conversion requirements for its members, said Rabbi Hara Person, CCAR director of strategic communications. “The specifics are left up to the individual rabbi.”

Reform converts, she said, typically agree to “some level of Shabbat engagement,” to raise their children “as Jews” and to “accept the yoke of mitzvot through a Reform lens.”

The Modern Orthodox Rabbinical Council of America (RCA) and its affiliated Beth Din of America formalized a conversion policy a decade ago; its details include membership in an Orthodox synagogue “within walking distance,” commitment to “12 years of Orthodox day school education” for all children in the family and “full observance of elements such as Shabbat, Kashrut, holidays, etc.” 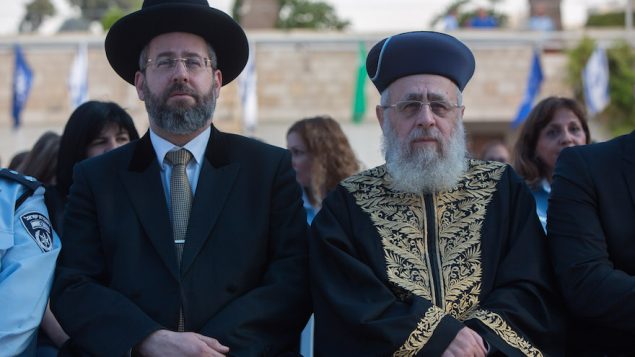 Representatives of the RCA, the Orthodox Union umbrella organization and the Chief Rabbinate did not respond to several requests for comment on this topic from The Jewish Week.

While Reform Judaism accepts as Jews individuals who are Jewish only on the father’s side, Conservative Judaism follows the traditional matrilineal policy. “That’s the halacha,” said Rabbi Julie Schonfeld, executive vice president of the Conservative movement’s Rabbinical Assembly.

Conservative rabbis, she said, take “a holistic approach” to supervising converts, insisting on few details, but asking future Jews to accept a life of Shabbat and kashrut and “keep growing in their Judaism.”

Rabbi Ain said she asks men and women who come to her for conversion “to start engaging with the community.” She asks for a commitment to “kashrut, Shabbat,” the Jewish holidays, and giving their children “a solid Jewish education.” She asks, “Are you prepared to share your destiny with the destiny of the Jewish people?”

“My experience has led me to believe that embracing, supporting and encouraging those who want to be part of the people of Israel is not only permitted, but it is a mitzvah,” Rabbi Ain wrote in a 2015 op-ed essay in The Jewish Week.

Judaism has traditionally taken two approaches to accepting converts, said Rabbi Seth Farber, the U.S.-born founder of ITIM. One is referred to as “faith commitment,” exemplified by the biblical figure Ruth, a Moabite who cast her fate with the Jewish people and is widely considered Judaism’s first convert. The other is referred to as “ritual commitment,” the agreement to do the commandments that the Jewish people accepted at Mount Sinai after their exodus from Egypt.

About two millennia ago, the Talmud “codified” the requirements of a “ritual” conversion, which has become the dominant type of conversion, Rabbi Farber said; it requires, at minimum, some adherence to kashrut and Shabbat observance, and mikvah immersion at the time of conversion. (And a brit milah for uncircumcised men, or a symbolic one for those already circumcised.)” 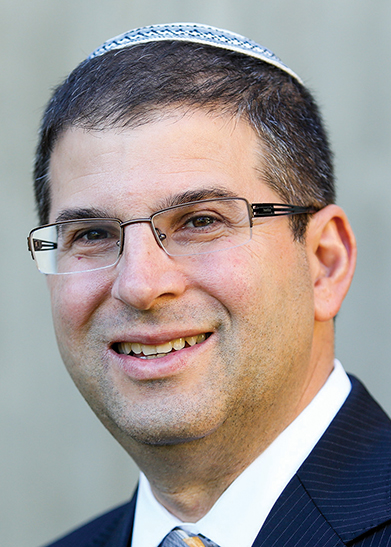 “What constitutes acceptance of the commandments?” — that is the crux of the schism between the charedi community and other segments of the Jewish community, Rabbi Farber said. Does the rabbi guiding a prospective convert insist that he or she agree beforehand to a litany of specific mitzvot before agreeing to go forward with a conversion, or accept “a basic thrust … a general direction” of commitment?

In other words, does the rabbi trust the convert’s sincerity to lead a life according to Jewish tradition without specifying all the details?

“Conversion is the beginning of the process” of leading a Jewish life, Rabbi Farber said. “That is our direction.”

“Conversion is the beginning of the process. That is our direction.”

That was the direction for several decades of Israel’s Chief Rabbinate, while it was under the auspices of Religious Zionist (roughly the Israeli equivalent of Modern Orthodox) rabbis who later adopted more-stringet standards. As the charedi segment of Israel’s Orthodox community has grown in numbers and political influence, the Chief Rabbinate has come under charedi control in recent years, enforcing stricter standards for conversion. “They have raised the bar very, very high” to be accepted for conversion, Rabbi Farber said in a telephone interview. Potential converts are told they must keep all of the mitzvot to qualify; that realization keeps many men and women from even applying for conversion.

A bill submitted in the Knesset earlier this year would give the Chief Rabbinate exclusive control of conversions, prohibiting some modern Orthodox rabbis, like Seth Farber and Shlomo Riskin, the Cheif rabbi of Efrat, from performing conversions.

“The question is, how picayune, how many details [of future observance] do you go into?”

Rabbi Riskin, who has reached out to the estimated 350,000 emigrants from the former Soviet Union who are Jewish only on their father’s side, told The Jewish Week, “The question is, how picayune, how many details [of future observance] do you go into” when judging the acceptability of a possible convert. Many would likely seek to convert if the process were not so intimidating.

“What we want is someone who takes Judaism seriously … who has learned about the basics of Jewish practice,” Rabbi Riskin said. “They have to have a good notion of what these things are.”

Rabbi Ain said this approach has worked with the people who have converted under her auspices.

She cited Janet, among the leadership of Sutton Place Synagogue.