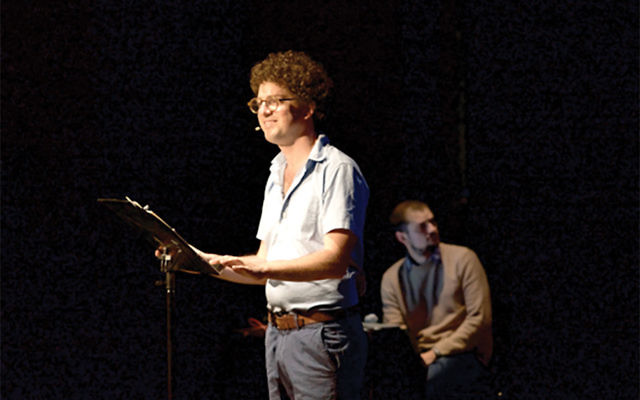 Israel’s founding father David Ben-Gurion famously conceived of the country as a melting pot. But seven decades later, in 2015, Israel’s president, Reuven Rivlin, described it as a society divided into four discrete and incompatible “tribes.”

Rivlin’s speech spotlighted “an inconvenient truth that everyone feels and knows, but very few people acknowledge,” said Mishy Harman, co-founder and producer of the popular Israeli radio show “Israel Story” (Sipur Israeli). He was narrating a live taping of an episode — a multimedia event blending live storytelling and music with recorded interviews and films. The show took place on the eve of Yom Ha’Atzmaut, at JCC Manhattan, before a sold-out audience of more than 200 people. It was part of UWS Celebrates Israel, the Upper West Side’s annual neighborhood-wide Israel Independence Day festival, a project convened by the JCC and sponsored by UJA-Federation of New York.

Modeled after NPR’s “This American Life,” the long-form, nonfiction podcast and radio show, “Israel Story” is produced both in Hebrew and English. Each episode has a theme; this one charted the space between Ben-Gurion’s dream of a melting pot and Rivlin’s four-tribe reality through the stories of two inter-tribal couples. While often funny, touching and heartwarming, for a “Celebrate Israel” show it struck a surprisingly ambivalent chord. “Yom Ha’Atzmaut is obviously a day to celebrate Israel, and the amazing achievements it has made in less than 70 years. But it’s also an opportunity to see how things got started and where they are now,” Harman told The Jewish Week. Qualifying that he is no expert on Jewish-American public discourse, he added, “I think it [the show] illuminated something important about Israeli society which isn’t much talked about here.”

The show opened with segments from “Ben-Gurion, Epilogue,” Yariv Mozer and Yael Perlov’s documentary based on newly discovered 1968 interview footage of Israel’s first president. Clinton Bailey, the American Jew who conducted the six hours of interviews with Ben-Gurion at his Negev home, told “Israel Story” how “the old man” would talk of his vision of Israel as a melting pot. “He understood that for Israel to succeed, people had to get along together, even if they come from different cultures,” said Bailey. “Everybody would put aside their Yiddish and Arabic, Hebrew will become the language of past and future … it was all part of his vision of a people coming back to their land.”

In many ways, Ben-Gurion’s dream did come true. Over time, the shared state institutions — Israel’s elementary schools and the Israel Defense Forces — have in fact imbued the vast majority of Israelis with a common Zionist identity and core values, largely easing ethnic tensions. Today’s conflict lies with the Israeli minority groups that were excluded from the national institutions, and, as Rivlin pointed out in his seminal speech, are no longer minorities.

“In the 1990s,” Rivlin said in the speech, parts of which was screened during the taping, “Israeli society was comprised of a clear and firm secular Zionist majority, and beside it three minority groups: a national-religious minority, an Arab minority and a charedi minority. Although this pattern remains frozen in the minds of much of the Israeli public, the press and the political system, reality has totally changed.”

A pie chart showing the demographic composition of Israel’s first grade students illustrated what he meant: 38 percent of the students were mainstream, state-educated secular-Zionists; 15 percent were national religious; a quarter were Arabs; and about a quarter more were charedi. With higher birthrates among religious and Arab populations, these four groups would soon be equal in size. Each of the “four tribes,” Rivlin continued, lives in separate cities, moves in separate circles and sends their children to separate school systems, deepening and perpetuating the vast cultural, religious and nationalistic chasms between them. Three of the four tribes do not see Israel as a liberal Jewish democracy, or serve in the IDF; two of them, the Arab and the charedi — amounting to roughly half of Israel’s near-future population — do not celebrate Yom Ha’Atzmaut, sing the national anthem or identify as Zionists. 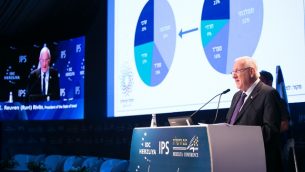 As a counterpoint to the narratives of Ben-Gurion and Rivlin, “Israel Story” decided to seek out inter-tribal couples, the living epitome of a melting pot. It presented the stories of Sarah and Tammer, a young Palestinian-Jewish couple, and Batya and Yaakov, a charedi couple with children whose marriage was rocked as Yaakov slowly abandoned his faith.

To be able to live together, Sarah, a 23-year-old Jewish-Israeli immigrant from Ukraine, and Tammer, a 19-year-old Christian-Palestinian from Ramallah, left their respective communities and pitched a tent together in the desert, in a nomad area that is technically under neither Palestinian or Israeli control. Their story ended badly: After months of living off the land and off the map, Tammer was picked up by Israeli soldiers for living in an unauthorized location, and with his papers revoked could no longer leave Ramallah. Sarah, despondent, left Israel.

Batya and Yaakov fared better, managing to stay together despite their now different lifestyles.

Of the five “live episodes” Israel Story has recorded in the past three years at the JCC, this one may have been the darkest. “Every show is different, but in many ways this one did stand apart,” Harman told The Jewish Week. “It was much more difficult to find inter-tribal couples — inter-tribal like Rivlin defines the tribes — than we thought it will be. We expected there would be just a few. There were even fewer than we expected.”

The couples also were highly secretive; in the show, Harmen compared tracking them down to “infiltrating an underground network.” Months of looking produced only a few hundred candidates, of which only a handful were willing to talk. “This was a first for us; most people are usually very interested in telling their stories, and we very rarely interact with people who don’t want to be interviewed.” The resulting episode had fewer segments than usual, “and the stories were longer, more complicated — a little less ‘let’s all go home and feel good about ourselves’ kind of stories,” said Harman. “We were struck by how sensitive a topic this was, and how raw were the emotions it produced.”

After the show, the audience milled around the auditorium in what appeared to be a thoughtful mood. Jessica Schaefer, a 46-year-old fashion marketer and native New Yorker, told The Jewish Week, “I thought I knew about Israel, but I didn’t know about this [Rivlin’s four-tribes speech].” Saying she would look it up online, she remarked that “if this is true, we [the Jewish community] have been worrying about all the wrong things.”

Gillad, a 35-year-old systems analyst who moved to New York from Tel Aviv eight years ago, said that for him the show crystalized a reality that has been a long time in the making. “Growing up, there was always someone warning, ‘Oh no, the [Israeli] Arabs are about to outnumber us, the charedim are about to outnumber us,” he said. Because these predictions were usually made as part of some political agenda, he got used to shrugging them off, and — much like climate change, he said — “now it’s here and I didn’t even see it coming.”

But when asked what Israel should do about this new reality, Avnery shrugged, this time literally. “We’ll get through it somehow, we always do,” he said, leaving the room.