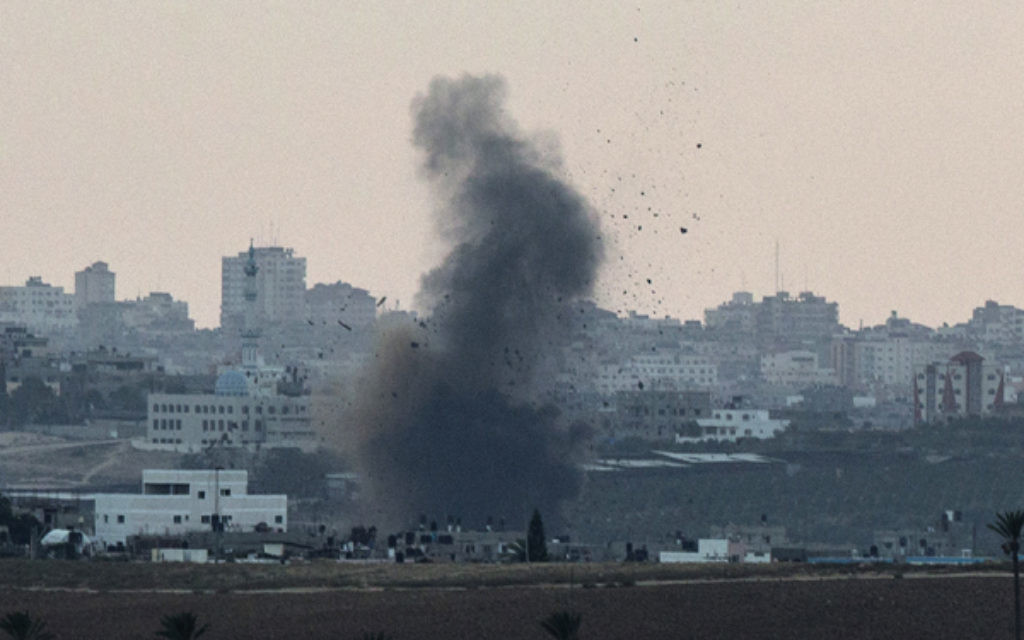 On Sunday, a similar demonstration in Paris by thousands of protestors turned ugly after 150 protestors broke away and carried out what European Jewish Congress President Moshe Kantor called an “attempted lynching” outside a local synagogue filled with 200 Jewish worshippers. The Jews had to wait inside until police could rescue them while a private Jewish security team battled the protestors.

Pro-Hamas rioters targeted two other French synagogues over the weekend — one was fire bombed, and three Jews were hurt when rioters tried unsuccessfully to storm the synagogue.

In recent days there were several pro-Hamas rallies in Germany at which protestors shouted anti-Semitic slogans. And in The Hague, the Netherlands, hundreds of people filled a central shopping area, carrying signs that juxtaposed the Israeli flag with the flag of Nazi Germany. One held a sign that read: “Stop doing what Hitler did to you.”

Such violent and vicious anti-Israel protests are not unique to Europe. In Los Angeles last weekend, four people were arrested for allegedly brandishing sticks and interfering with a pro-Israel demonstration. And in Boston, anti-Israel protestors physically assaulted Jews.

Alarmed that such extremist demonstrations and violence has spread to American shores, senior Homeland Security officials spoke with Jewish leaders in a conference call Monday.

In a statement, the Secure Community Network, the security arm of national Jewish umbrella groups here, said the 200 Jewish leaders on the call “discussed the security implications of operations in Gaza on Jewish communities both domestically and worldwide, and reviewed security protocols for planned rallies and demonstrations in support of Israel.”

The Anti-Defamation League released a statement Monday asking that Jewish institutions, organizations and synagogues bear in mind the “tense atmosphere” the war has generated and “encouraging them to have a heightened sense of awareness, particularly in light of what is happening overseas.”

The war with Hamas was expected to reach a decisive point later this week when Israel will have to decide whether to launch a ground assault in the Gaza Strip, according to retired Israeli Brig. Gen. Michael Herzog.

“I don’t expect to see a major attempt to conquer Gaza — which would require staying there over a year — but a more limited ground operation,” Herzog said in a conference call organized late Tuesday by UJA-Federation of New York and the Jewish Community Relations Council of New York.

“There are some, both inside and outside the government, who have criticized the government, saying Israel should apply more pressure on Hamas because if we don’t we will find ourselves fighting them again soon,” he said.

“The Israeli goal is to reach a cease-fire that is stable and will last a long time,” Herzog said. “There is no sense in fighting Hamas every few months. The last cease-fire lasted a year-and-a-half. We expect a much longer cease-fire after this operation.”

He noted that had Hamas accepted the Egyptian-proposed cease-fire Tuesday, it would have signaled a major defeat because it did not contain any of the conditions Hamas fought for. Those include the release of Palestinian prisoners arrested following the murder last month of three Israeli teens; the opening of Gaza border crossings; and pay for tens of thousands of government employees. Egypt, the mediator, is far less sympathetic to Hamas now than it was under President Morsi, the Muslim Brotherhood leader who was forced out of office last year.

During the weeklong course of Israel’s Operation Protective Edge, Israeli defense officials believe Hamas has lost 30 percent of its rocket arsenal — including 40 percent of its medium and long-range rockets, Herzog said.

“But they still have thousands of rockets, and ultimately it may require a ground operation” to destroy more, he said.

Of the more than 1,000 rockets Hamas has fired, Israel’s Iron Dome anti-missile shield has successfully destroyed 90 percent of those headed for populated areas. It now has nine Iron Dome batteries stationed throughout the country. As a result, Herzog said, Hamas has “inflicted little damage.”

However, a Hamas mortar shell fired close to the Gaza border struck and killed a 37-year-old Israeli volunteer Tuesday while he was bringing food to soldiers. It was Israel’s first fatal casualty. Hamas claims that Israeli rockets and artillery have killed more than 200 Palestinians, most of them civilians.

As long as the war continues, there will continue to be pro-Hamas demonstrations that include anti-Semitic rhetoric, according to Abraham Foxman, the ADL’s national director.

“It’s not new,” Foxman told The Jewish Week on Tuesday. “We saw it during the last go-round with Hamas [in 2012]. These demonstrations, which are primarily anti-Israel and pro-Hamas also spill over into some anti-Semitism. But what has happened in the last couple of years is a greater use of the Internet to recruit and create ugliness. We have seen references to Nazis and Warsaw and Auschwitz.”

But Foxman said the violence at demonstrations outside French synagogues “shocked many of us.

Serge Ben Haim, one of the leaders of the Jewish community in Paris, told IDF Radio that the attack Sunday was a defining moment.

“We could have had something like Kristallnacht,” he said, referring to the infamous night in 1938 when Nazis-orchestrated attacks through Germany and Austria killed 500 Jews and burned Jewish homes, synagogues and shops.

He said that when the pro-Hamas protestors reached the synagogue, they were armed with rocks, glass, axes and knives. Until the police arrived, Haim said, unarmed youth volunteers protected the building.

“On our side there were five lightly injured, three of them from being struck by the French police,” he was quoted as saying. “We skirted a true catastrophe.”

Referring to the scuffles in Los Angeles and Boston, he said, “Perhaps we are importing here the kind of lawless mob-driven way of conducting these so-called demonstrations.”

Mariaschin suggested that one reason for the large demonstrations is the “absolute access people have today to all kinds of media. Anyone can access French TV or media coming out of the Middle East and can see unbridled bias. That has to account for some of this activity.”

Asked about the two violent demonstrations in the U.S. last weekend, he replied: “The level of audacity has risen to a dangerous point. In this country we have been very fortunate that we have not had those kind of European or Middle Eastern-style of demonstration, but one has to be concerned about it.”

And pro-Hamas demonstrations have also rocked Chile, according to the World Jewish Congress. Not only was there a massive demonstration in downtown Santiago last week, but the home of a local Jewish family was stoned to the chant of, “Killer Jews,” and “Get out of the country.”

Foxman said Jewish groups should not be inhibited in staging their own pro-Israel rallies.

“I think they should notify local law enforcement, insist on their right to meet wherever they want and to be separated from those who are antagonistic,” he said. “It is important for Israelis to see such demonstrations, just as they see pro-Palestinian demonstrations. It is important to see Jews gather in support of Israel’s effort to be safe.”