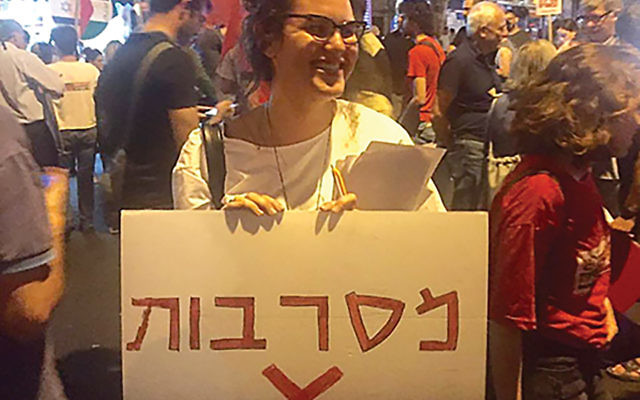 Tair Kaminer’s father was kvelling when I talked to him this week. As far as the Israeli mainstream is concerned, his daughter, 19, is trying to melt away the glue that holds Israeli society together, but he was full of pride.

I spoke to Micah Kaminer just before the Israeli military released his daughter from one of its prisons, after she served 159 days for refusing to obey her draft order, or, as she would have it, “collaborate in the crime known as ‘occupation.’”

By the time she walked free on Monday, she had served more prison time than any other female contentious objector in Israel’s history. Her parents, Micah and Sybil, said that they stand behind her. “We are proud of our daughter,” her father said. “We feel she has done a great service to the country and to Israelis.”

He claimed that her imprisonment was pointless, saying: “It’s an absurdity to put a girl like her in prison. What do we achieve?”

It is a story that could have been expected to fall through the cracks. After all, Israel’s Arab media is not interested in news stories about the draft process in the army, and most Jewish citizens have no patience for the fringe left-wing ideology that drives Kaminer. But, unexpectedly, she did manage to force contentious objection, albeit briefly, onto Israel’s news agenda — and this is part of the reason that her parents are “proud.”

When it was clear that her prison term was repeatedly renewed and that she had been imprisoned for more than half a year, articles about her appeared in even the mainstream centrist press like the Yediot Achronot newspaper. The tone of the coverage was not sympathetic to her ideological position, but tended to suggest that her long imprisonment was heavy-handed.

Indeed, it was in the thick of the media attention that the military decided that it would release her — while trying its best not to set a precedent by reprimanding her conduct in its decision. She is not being released from prison, and from military obligations, because of her conscience but because she has been deemed incompatible for the army and due to her “poor, severe conduct.”

Her refusal to serve angers lots of people who think that army service is a national responsibility, regardless of political views, while full support comes only from a fringe sector on the far-left. But a large segment of Israel feels ambivalent about the way that the army decided to deal with her — in large part because one point that her father makes resonates strongly.

“If we were a country where 99 percent of people were serving in the army and she was an exception, they would have a right to punish her, but we are a country where only about half the population serves in the army,” he said, referring to the fact that religious women are entitled to an exemption as are ultra-Orthodox men and all Arabs. Meanwhile, many others who simply do not want to serve get exempted through various means — faking mild psychological disorders, claiming alcoholism, or as supermodel Bar Refaeli famously did, by getting married and then divorcing soon after a military exemption arrived.

In a country where thousands receive formal exemptions because of their religiosity or ethnicity, Kaminer senior asks why one more person should merit such a harsh response by the establishment, while if she were religious or Arab she would be routinely dismissed. He also asks why the military turns a blind eye to many who receive exemptions but cracks down on his daughter who stated her objection honestly. “The army is basically saying it’s OK to lie, we would rather you lie and get out [of the army] than stand up for your beliefs, and this is the tragedy here,” he commented.

There is some truth in this, but it’s not so clear that this is a bad thing. Every large organization has people that will play the system, either using loopholes or downright dishonesty, and needs to decide how far it will go to crack down on this. Israel’s army invests limited energy into chasing draft dodgers, in part because they are going to be soldiers with low motivation levels anyway.

But the missing manpower of draft dodgers is far less important to the military than national solidarity, than the sense — at least across most of the Jewish public — that everybody serves in the army regardless of what is going on in the political sphere.

The army tolerates people using all sorts of ruses to evade service, but isn’t prepared to give a green light to people tying the concept of service to politics, and saying that they will judge the question of whether or not they are prepared to serve based on Israel’s political conduct. This is why the army has come down so hard on rabbis who suggest that religious soldiers should refuse orders to evacuate settlements if given, and why it punished Kaminer so severely.

Kaminer’s message is that others should draw a link between military service and politics, which the army is desperate to avoid. “She didn’t ask other people not to go to the army but to understand that going to the army is a political stance for the occupation,” her father said.

And with precisely this in mind, the military is likely to continue turning a blind eye to the Bar Refaelis of the future, and cracking down on those who follow in Tair Kaminer’s footsteps.