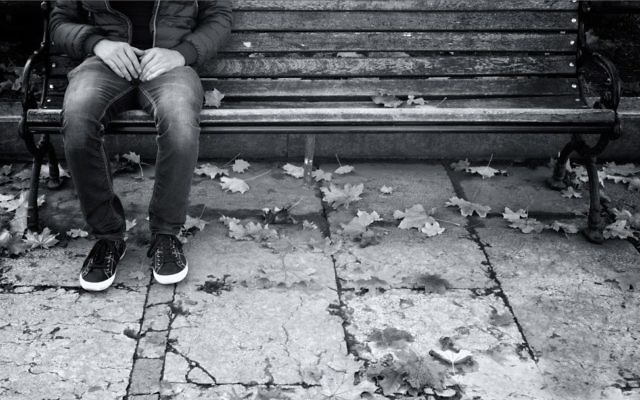 “I called the facility to see about kosher food – they said it might not be possible, but they’re looking into it. If they can’t get it, he should still go, right?” I stare at the phone in disbelief, and can practically see my mother fretting on the other end of the line, phone held up between her shoulder and her ear, simultaneously taking a sip of lemon water and applying the minimal amount of makeup she wears these days.

My brother is sick, so sick, and she’s concerned about him eating kosher food? He’s so sick he only eats bread – a loaf of Country Dutch a day – and water bottles from a ritualized list of nearby stores. So sick that he hasn’t cut his hair or shaved his beard in months. So sick that he can’t wear any item of clothing more than once; instead, he has dozens of the same tank top and sweatshirt, each new purchase a salve to his deeply sick psyche. So sick that, on the way to the airport to catch a flight to the aforementioned treatment facility, he jumped out of a moving vehicle on the Van Wyck Expressway, desperate to avoid any change to his stasis. You can excuse me if I’m not too concerned with kosher food.

Not atypically, my brother’s first OCD rituals were related to religion. He became obsessed with mikvah – immersing both himself and my parents’ dishes on a daily basis. We attributed this newfound obsession with his religious growth – he had just returned from a year and a half in Yeshiva. Despite the fact that we have a family history of OCD – that I myself suffer from it – it never occurred to any of us that his proclivity for dipping in the mikvah was anything other than religious zeal. We now see his mikvah–dipping for what it was: the first stage of what would become a debilitating case of Obsessive-Compulsive Disorder.

In an effort to quell his own anxiety, my brother self-medicated, smoking enough weed to calm his nerves and send him into a psychotic tailspin. While marijuana might be harmless to most, it can also cause psychosis in a small subset of the population, my brother among them. He dropped out of college and disconnected completely from reality. He came to believe he was chosen by God and that he was therefore exempt from practicing all traditional Jewish laws and customs. He began referring to himself as an “angel of God,” and became judge and jury to our family’s religious practice. Even as he himself was breaking Shabbos, he would call my parents “heretics” if they weren’t careful enough in their own observance.

With a lot of time (including several hospitalizations, multiple domestic disturbance calls to the police, and several attempted “escapes”), an incredible psychiatrist, medication, and a sizeable miracle, my brother stopped smoking weed long enough to allow his psychosis to abate. With his head a bit more clear than it once had been, his psychiatrist was able to begin treating the underlying issues.

Without the weed to neutralize it, my brother’s OCD was worse than it had ever been. He would only use pillows, blankets, towels, and clothes once before they became “used up.” He spent thousands of dollars buying new underwear, new socks, and new clothes. My parents’ house began to look like a consignment shop, with dozens of barely used blankets, pillows, and towels lining the stairs, the hallways, the tables, and the chairs.

Though he no longer considered himself an “angel of God,” he still did not observe traditional laws or customs related to Shabbos or kashrut. Despite that, he never failed to tell my parents where their own religiosity was lacking.  In fact, when I was newly married and planning to come home for the weekend, he told my mother that he was concerned he’d have to share a room with my husband, his new brother-in-law, because “there’s this thing called mikvah and they aren’t allowed to sleep in the same bed.”

As the months passed, his mental health continued to deteriorate. His compulsions would hit at all hours of the night.  As he no longer drove (he was too afraid), he’d wake up my parents or sister and plead until they drove to wherever his compulsion was telling him he had to go (note: while the line between enabling and supporting is complicated in patients with OCD, this was always done in collaboration with his psychiatrist). And if that compulsion hit him on Shabbos or Yom Tov, you can bet that someone was driving him. Despite the fact that they did this for him – to ensure that he was stable enough to continue with his treatment – and in every conceivable way accommodated his illness, he would frequently call them out for breaking Shabbos. If it seems unbelievable, know that I agree with you. His illness had turned him into a raving, incomprehensible, and chutzpadik shell of who he once was.

And who was he, once? He was a social butterfly, a friend to all, a Yeshiva–league basketball player who was a counselor at HASC and deeply loved his campers. He was a learner who enjoyed nothing more than sharing a chassidishe tale with someone lacking inspiration. He was a light in every room, a class clown who consistently got straight-As. To this day, when someone hears my last name they ask if he’s my brother. When I say yes, I know exactly what they’re going to say: some version of, “I love him! He’s the man.” He saw the good in everyone, and made sure they knew it. He was a joy to know and a delight to talk to.

And who is he, now? He’s a deeply ill young man, struggling with severe OCD, anxiety, and depression. He feels alone in the world; as though our family has abandoned him. He has lost his friends, his rebbes, and his network. He spends most of his day washing his feet in the shower, picking apart his Country Dutch bread, and cursing my parents for their “evilness,” even as they live and breathe to make his life comfortable. We don’t blame him, and we don’t judge him. Even as it breaks our hearts to see him like this, we know that his recovery will only happen once he accepts that he needs to get better.

In the meantime, we do our best to stay strong, both for him and for one another. And if there’s a lesson to be learned from this story, I propose it is this: Be mindful of those around you. Because on those days where we’re awake until 4 or 5 am, pleading with him not to run away or begging one another not to give up on him just yet, all we really want is a smile and a kind word. If this experience has taught me anything, I’ve learned that no matter how put together a person might appear, everyone has something and everyone could use a little kindness in their day.