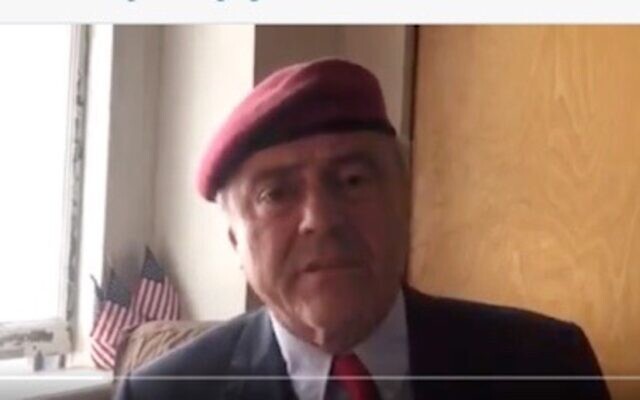 Curtis Sliwa, the Guardian Angels founder, responds in a video to accusation that remarks he made in 2018 were antisemitic, July 25, 2021.

(JTA) — In a video message Friday, Curtis Sliwa responded to criticism of a 2018 speech in which he warned residents of the New York suburbs that Orthodox Jews were trying to “take over your community” and are a drag on the tax system.

The Guardian Angels founder declined to apologize in a video shared with media Friday afternoon, instead inviting Orthodox Jews to sit down with him to “resolve our differences.” He also reminded potential supporters of his work on behalf of Jews.

“My two youngest sons have been raised Jewish. They need to read this? To say to themselves, my father is an antisemite? Come on, even my worst critics out there would recognize that’s a shanda,” said Sliwa, who became the Republican nominee for New York City mayor on Tuesday. “So I’ll reach out to meet with you and hopefully we’ll be able to resolve our differences.”

The original video, which resurfaced Thursday, showed Sliwa at a meeting of the Reform Party in October 2018, speaking to residents of upstate Rockland and Orange Counties. In his speech, Sliwa derided the Orthodox “bloc vote” and suggested they control politicians because of their money.

“They don’t vote the way normal Americans vote … They’re being told by the rebbe or rabbi this is who you vote for,” Sliwa said in the 2018 speech.

Agudath Israel of America said it was “outraged” at his remarks, calling them “age-old misrepresentations and distortions that those who hate Jews have used for centuries.”

Nowhere in Friday’s response did Sliwa apologize or take back his statements about Orthodox Jews being a drag on the tax system and diverting public school funding to yeshivas.

“For 42 years, I’ve been there with the Guardian Angels when Jewish people were in need. Are you forgetting Crown Heights in 1991 when David Dinkins ordered the police to stand back?” he said. “I and the Guardian Angels were there 30 days and 30 nights to protect the Lubavitchers.”

A growing Orthodox community has become an influential constituency in Rockland and Orange; the state’s attorney general recently affirmed that one Orange County town used underhanded tactics to keep Orthodox Jews from moving in, while a court ruled that an Orthodox-dominated school board in Rockland effectively discriminated against people of color.

Sliwa was a member of the Reform Party at the time of the 2018 video, switching to the GOP in February of 2020.

“I’ve been your friend, I’ve been there always so look I’ll reach out to you and let’s sit down and discuss our differences but please,” Sliwa entreated. “Don’t call me an antisemite.”