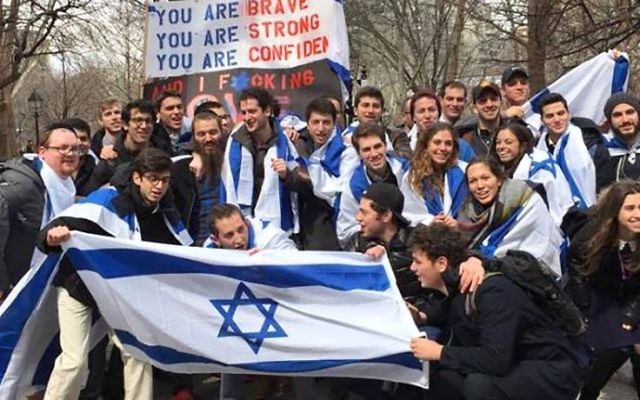 The Jewish community is investing tens of millions of dollars in Israel education and advocacy programs on campus. How’s that going?

A 2015 Brandeis University study measuring “Israel literacy” indicates that there is much work to be done in educating our next generation about modern Israel. More than 600 Jewish students from 20 universities around the country were given a multiple-choice quiz with 90 questions, ranging from easy (Example: Who is the current prime minister of Israel?) to difficult (Where is the headquarters of the Palestinian Authority?)

“Overall, students had an average score of 46 percent correct,” according to the study. “The median score was 44 percent, and 92 percent of all students scored 75 percent or lower.”

“It’s startling how little they know,” noted Kenneth Stein, president of the Center for Israel Education (CIE), an Atlanta-based nonprofit whose core objective is to spread knowledge about the modern Jewish state.

“It’s startling how little they know.”

Recognizing the need, the Jewish community has created a field of Israel education. The field includes a range of organizations and academic programs seeking to professionalize the effort to not only instill a love for Israel in young people but provide a sophisticated knowledge of the modern Jewish state, with all of its remarkable successes and daunting challenges. Then there is Hillel and Chabad and others seeking to enhance the Jewish experience on campus in a variety of ways.

When it comes to Israel advocacy, my impression is that groups like the Maccabee Task Force, which Las Vegas billionaire Sheldon Adelson funds, and Stand With Us, an international project, do a great job of bolstering students already supportive of Israel, which is important. But I think we should be focusing and spending less on college students and more on educating teens in their high school years, or earlier, with a greater emphasis on history and context. The Write On For Israel students on their recent educational trip to Israel. Tuvia Book./W

With all the money pouring into efforts to counter the BDS (boycott, divestment and sanctions against Israel) movement, we should be asking whether that’s the most effective way to reach the greatest number of our young people.

I don’t think the college years are the best time to reach them. There’s too much going on that’s new and exciting and maybe a bit overwhelming in students’ lives. Trying to engage them about the complex Middle East conflict when they’d rather explore new academic and/or social pursuits is awfully tough.

The tendency is to stay away from a subject that seems too complicated to grasp, especially when others on both sides are so confrontational about it.

If you’re 18 or 19 years old and living away from home for the first time, would you rather go to a lecture on the dangers of the BDS movement or a party across campus? Would you prefer to pledge allegiance to the Zionist cause (whatever that is, students may ask) or to a fraternity or sorority?

I’m convinced the best time to educate our young people about the modern state of Israel is in their high school years, or younger. That’s a time when they have an open mind, are more focused, more inclined to heed instruction from others, and still under the influence of their parents. 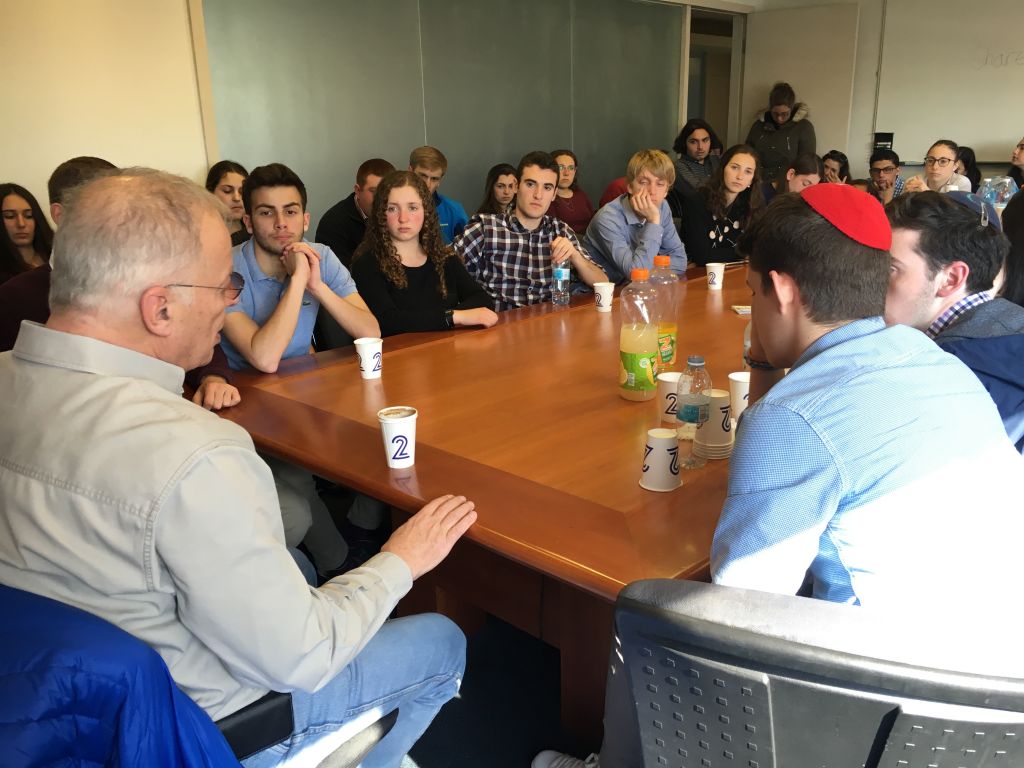 Ehud Yaari, Israeli journalist and TV personality, met with the 2017 Write On students and spoke about the Arab-Israeli conflict on Thursday, February 23, 2017. JW/Linda Scherzer

Since 2002, The Jewish Week has sponsored Write On For Israel, a unique two-year educational/advocacy program for high school juniors and seniors to prepare them to deal with the Mideast debate when they get to campus.

The motivation for the program, which was launched with the support of the Avi Chai Foundation, came from visiting with and talking to Jewish college students at the outset of the brutal second intifada. These were caring young men and women who felt for Israel in their kishkas but were not prepared educationally or emotionally to counter the passionate rhetoric of pro-Palestinian students. They didn’t have the facts or the confidence to make Israel’s case.

“I’m increasingly convinced that the earlier we teach about Israel, and layer it over time, the more they’ll remember it.”

We came to the conclusion that it may be too late to make a Zionist out of most young Jews who come to college with little knowledge of modern Israel. They’d heard Bible stories as youngsters and had learned about Judah Maccabee and his brave brothers from centuries past, but didn’t know the 20th-century stories of David Ben-Gurion, Golda Meir or Menachem Begin.

Our program, now funded through donations and tuition, has graduated more than 600 students and will welcome its 16th cohort of about 50 Jewish public school, day school and private school students this fall. The highlight is the senior year trip to Israel, when students meet government officials, Israeli and Arab journalists, IDF officers and foreign policy experts.

Kenneth Stein, the CIE president who has been teaching 18- to 24-year-olds for more than four decades as professor of contemporary Middle East history, political science and Israel studies at Emory University, recognizes the need to start educating our next generation in their teen years.

“I’m increasingly convinced that the earlier we teach about Israel, and layer it over time, the more they’ll remember it,” he told me. His goal is to create “something transformational, not just a transactional experience,” and the means to do that, he says, is to “provide context and perspective.” 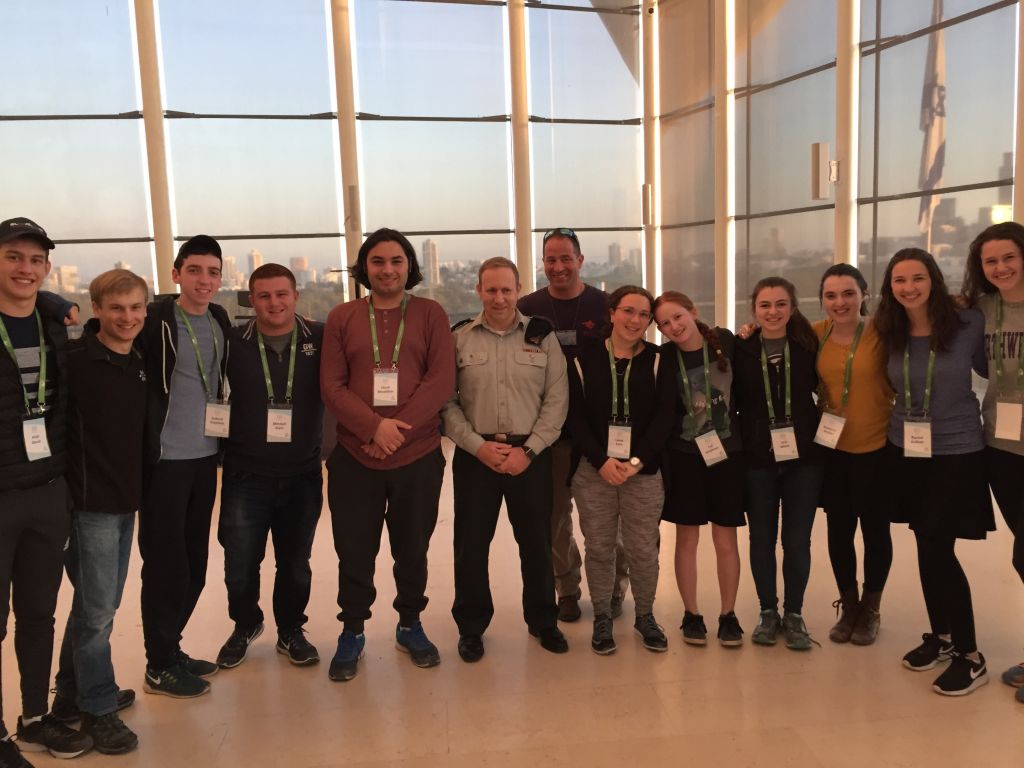 For example: “Do students need to know that Ben-Gurion was Israel’s first prime minister? Maybe not. But it may be essential to know that he made a strategic decision in the 1930s and ’40s to lobby American Jews [about the Zionist cause] so he could come back to them [for support] in the ’50s and ’60s.”

Stein says he is in the minority in advocating for in-depth textual study over the emotional experiences of advocacy and activism, “which are more immediate and seems appealing.” But giving young people substantive “content and perspective sustains them over time and gives them a lasting way to interpret events,” he believes.

Explaining why Jews need a state of their own, Stein says he tells students that “Jews have always been a minority, since the expulsion [from Spain in 1492], and then they say, ‘Oh, now I get it.’ That’s transformational.”

Granted, there’s no magic formula for instilling the next generation in the kind of emotional and intellectual engagement with Israel that will make them lifelong Zionists. But the earlier we start the process, the better.