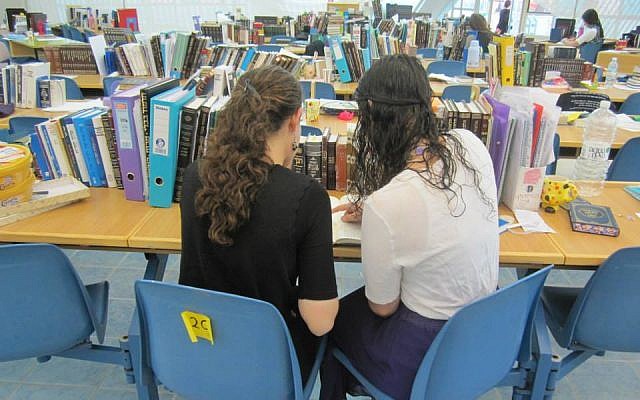 The mind’s selective ability to remember continues to amaze me. I can’t say why I remember with such clarity the heated fight I had with a college boyfriend more than two decades ago, while strolling through the school’s hilly campus. “How can you possibly believe that girls shouldn’t be required, like boys, to learn Gemara in day schools? Of course they should! There should be no difference just like there’s no difference in the math or science requirements. Do you really think women don’t have the intellectual capabilities for this pursuit?”

While he was in favor of girls learning Gemara if they opted in, his opposition to institutionalized gender equality for Jewish learning gave me serious pause. My boyfriend was a traditionalist from a Modern Orthodox household and didn’t feel the need for radical change. Why should girls be forced to learn Gemara when many clearly didn’t want to? Why couldn’t they continue to just opt in?

The truth is, back then, Gemara programs for girls in Orthodox Jewish day schools were new and in many ways considered a radical departure from tradition. Even today, such programs are not offered in many “right-wing” schools that remain philosophically opposed to women learning Gemara.

I just knew my future daughter should learn on the same level as my future sons.

What strikes me as funny now is that I really didn’t even know at that time what learning Talmud entailed. I just knew my future daughter should learn on the same level as my future sons.

I was raised in a typical Conservative Jewish household with a rudimentary background gleaned from Hebrew school that included just a year of Mishna learning and no Gemara at all. My parents had an English Steinsaltz translation of Bava Metzia that I’d picked up a few times, but I wasn’t that inspired by the twists and turns of the torts. That’s likely because I didn’t have a basic understanding of what Gemara was all about. If I knew it was akin to trying to read the “mind” of God, I might have taken a greater interest.

It wasn’t until I became more observant that I felt compelled to learn Gemara in an overseas program in Israel. I’d already been learning on my own: the weekly Torah Parasha, the ethics of Pirkei Avot, and general rules of Halacha like the laws of Shabbat, which I had recently begun to observe. Friends taught me how to daven correctly, when to bow and take three steps back during the Amida. But deep down, I had my doubts. What was all this minutiae about? Did it really matter whether I tore a piece of toilet paper on Shabbat? Why isn’t all cheese kosher? Do women really need to cover their hair after marriage?

I knew I needed to experience Talmud even though my one year of college-level Hebrew (and total lack of exposure to Aramaic) made me a less than ideal candidate. I would never fully appreciate and respect Halacha until I developed a basic understanding of the rigor that went into determining how Judaism should be practiced. These were not decisions that were made on a whim. They were based on the practice, dilemmas and mindset of the time — which happened to be the third to fifth century — and while many of the circumstances described in the Gemara may seem foreign to us in our modern time, such commentaries helped to establish the sustainability of Judaism throughout the generations. The scholars who authored the Gemara were seekers, philosophers, moralists, scientists, and yes, sometimes humorists in their attempts to crack the code of the oral and written law in order to derive Halacha.

I would never fully appreciate and respect Halacha until I developed a basic understanding of the rigor that went into determining how Judaism should be practiced.

Getting a few insights into their reasoning opened up a new world for me in which I had a deep regard for the efforts that went into establishing Jewish observance. While the Torah is an informative roadmap, God relied on us to have the wisdom, conviction and devotion to fully establish a legal framework for how that road map would be implemented. This insight helped deepen my faith and commitment to the laws, even if I sometimes fall short in my own observance.

With all this in mind, I’m more committed than ever to the opinion that Orthodox Jewish day schools should offer the same Gemara curriculum to all students regardless of their gender. Even today, most day schools that offer Gemara to girls don’t make it a requirement as they do for boys. My daughter felt she was given short shrift by her school, in which girls started learning Gemara two years later than the boys. In her honors Talmud class, the girls never surpassed the boys who were in the non-honors class – throughout their entire four years of high school. These were the same girls who matched their male peers in AP calculus, got accepted into Ivy League schools, and have since enrolled in top graduate schools.  Many of the more modern schools in the U.S. have narrowed the disparity in recent years and are offering girls more rigorous learning that nearly matches what the boys learn. But it’s still not equal because it’s not a requirement. (Sadly, Israel remains far further behind in instituting Gemara curriculums into girls programs in religious public schools.)

Orthodox Jewish day schools should offer the same Gemara curriculum to all students regardless of their gender.

What’s more worrisome is the glass ceiling that exists for adult women who truly excel at Gemara and want to become top scholars on par with their male peers who become Rabbis. Unless they want to leave the “Orthodox fold” in which they were raised, there is little for them beyond the Shana Bet program at their Israeli seminary or the two-year Graduate Program in Advanced Talmudic Studies offered by Yeshiva University. Even after reaching these scholarly heights, many find few job opportunities available to them in traditional communities. While we’ve certainly come a long way since the argument I had with my boyfriend nearly 25 years ago, we still have a long way to go to achieve true Talmudic equality.

Deborah Kotz is a former journalist and freelance writer from Silver Spring, MD.