A gulf yawns between Israel and American Jews over pluralism, human rights and democratic principles. But there are, thankfully, connections that transcend politics.

‘Soul to soul our shadows roll,” Bob Dylan sings in one of his dark love songs, “and I’ll be with you when the deal goes down.” It’s an apt description of the relationship between Israelis and American Jews, in the best of times, that is. Two tribes tightly bound, lugging around thousands of years of a shared destiny, from the ancient Temple to the salons of the Enlightenment to the barracks of Birkenau to Einat Admony’s hummus. But these are not the best of times, of course.

The relationship, the nearness of it, has grown cold. Irreconcilable differences, the shrinks would say, a cloth in tatters. It’s not hard to find evidence of what’s fraying the garment: a right-wing ruling coalition in Israel reneges on a deal over egalitarian prayer at the Western Wall; an ultra-Orthodox Chief Rabbinate rejects conversions performed by some of the most prominent Modern Orthodox rabbis in America; a prime minister brokers a deal to bring a racist, Kahanist party into his government; a ruling coalition denies entry into Israel to its political enemies, and talks of annexing the West Bank; a nation-state bill downgrades the Arabic language; a prime minister cozies up to authoritarian leaders in countries where anti-Semitism is rampant; and the same prime minister embraces in a bear hug an American president despised by nearly 8-in-10 American Jews.

All of it, as well as a general assimilationist drift here, has led to a distancing of American Jews — especially millennials — from Israel, a fact driven home by poll after poll. A gulf, one as wide as the Mississippi, now yawns between Israel and American Jews over pluralism, human rights and democratic principles — bedrock values that fuel so much of the energy of Jewish life here. 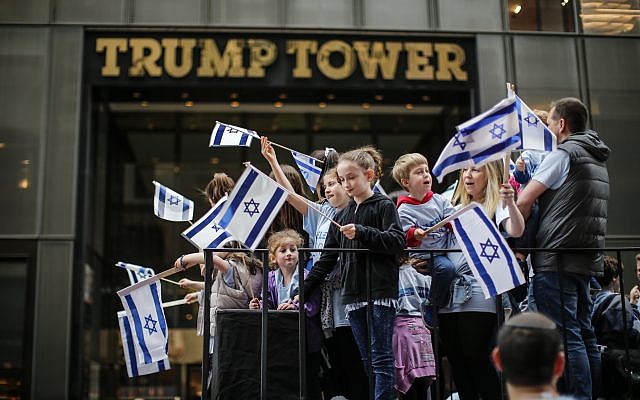 People march in front of Trump Tower during the annual Celebrate Israel Parade on June 3, 2018 in New York City. Security will be tight for the parade which marks the 70th anniversary of the founding of Israel. Getty Images

It’s easy for the noise of these political battles to drown out what’s actually happening on the ground to bring the two sides together. There are, after all, connections that transcend politics. So for our annual Israel Now special supplement, in the words of Johnny Mercer and that cantor’s son, Harold Arlen, we’re going to “accentuate the positive.” We’ll look at some bridge builders and weavers who are spanning the two sides of the relationship and re-threading the torn fabric.

Israelis and American Jews who study sacred texts together report profound understanding of their partners, and a breaking down of walls. Educators who bring Israeli and American high school students together say their charges never look at each other the same again. Pluralistic-minded rabbis in the new, aspirationally named nonprofit Shazur/Interwoven suggest some hard-won progress in introducing Israeli leaders to American Jewry’s diversity. Can the explosion of Israeli food here provide a menu for common ground? Can theater offer a stage for a more nuanced Israel-diaspora dialogue? Can a listening tour of the West Bank give American Jewish leaders a better grasp of the Israeli-Palestinian conflict?

It’s all a heavy lift, given the weight of the problem. But the study partners and the educators and the playwrights and the chefs and the rabbis-as-connectors are hoisting the cables and bearing the load of that bridge of understanding, and ensuring safe, if not always smooth, passage.

Come, we’ll cross over together.