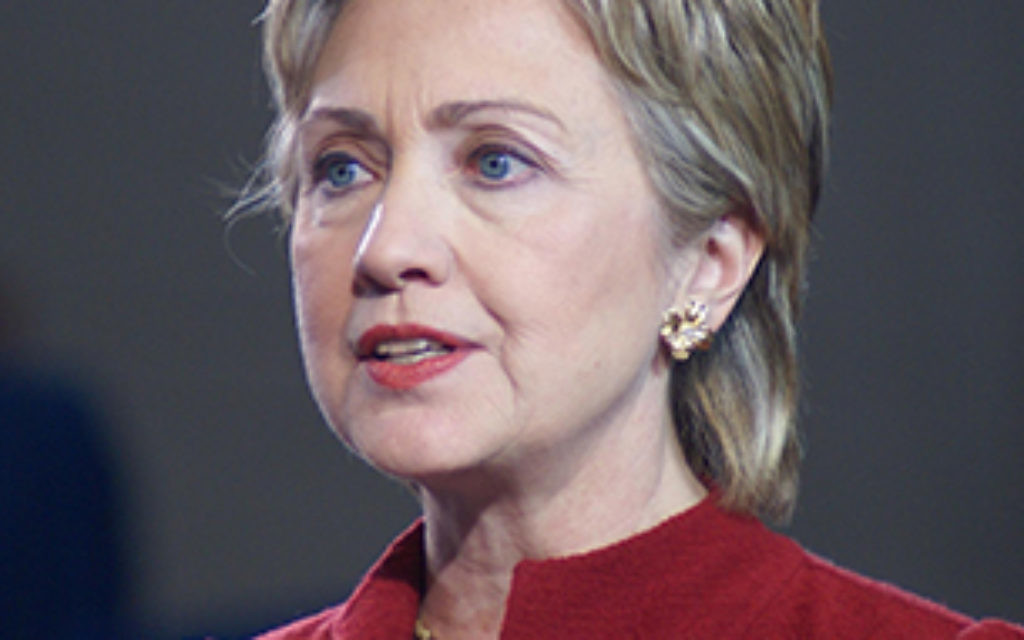 Washington — Hillary Rodham Clinton said she would endeavor as president to keep any arguments with the Israeli prime minister out of public view because such disputes help delegitimize Israel.

“I would invite the Israeli prime minister to the White House during my first month in office to talk about all these issues and to set us on a course of close, frequent consultation,” Clinton said in a foreign policy speech Wednesday delivered at the Brookings Institution.

She also said in her speech that while she supports the Iran nuclear deal reached in mid-July, as president she would strike Iran should it appear to be closing in on a nuclear weapon. That’s a step beyond the language of “keeping all options on the table” favored by the Obama administration and by the George W. Bush administration before it.

“I will not hesitate to take military action if Iran attempts to obtain a nuclear weapon,” Clinton said.

Her remarks on keeping U.S.-Israeli disputes out of the public eye may be seen as veiled criticisms of President Barack Obama, under whom Clinton served as secretary of state from 2009 to 2013 and who has described some forms of open disagreement with Israel as productive.

“There is a lot of room for tough love, particularly in private and behind close doors,” Clinton said. But open criticism — “I don’t think it’s a particularly productive course for the U.S. to take. It opens up the door for everyone else to delegitimize Israel and to pile on.”

Clinton reiterated her forceful endorsement of the Iran nuclear deal, saying the agreement, which trades sanctions relief for nuclear restrictions on Iran, blocks Iran’s paths to a nuclear weapon.

“Is it a strong agreement? Yes it is, and we absolutely should not turn it down,” she said. “It blocks every pathway for Iran to get a bomb.”

Obama has secured enough votes in Congress to keep Republicans, who oppose the deal, from killing it. Also opposing the deal are Israeli Prime Minister Benjamin Netanyahu and the American Israel Public Affairs Committee. A rally against the deal was scheduled to take place Wednesday on Capitol Hill and feature several Republican presidential candidates.

In what appeared to be another veiled dig at Obama, who has been criticized for not making a credible military threat part of the deal, she added: “I will set up my successor to credibly make the same pledge.”

Clinton outlined a range of areas where she would enhance security cooperation with Israel and increase the U.S. military presence in the region. She also said she would aggressively target Iranian-backed terrorist groups, including Hezbollah in Lebanon and Hamas in the Gaza Strip.

Clinton said she would not presume to criticize Israelis who oppose the deal, saying that while she is convinced it makes Israel safer, “I don’t know what it’s like to live under constant threat from your neighbors.”

Notably, in an appeal for civil discussion on both sides of the debate, Clinton backed the Senate leadership aspirations of Sen. Chuck. Schumer, D-N.Y., one of a handful of Democratic senators who oppose the deal.

She said that while she disagreed with her “friend, Chuck Schumer,” he was “going to be an excellent leader in the Senate.”

A number of liberal action groups, led by MoveOn.org, have said that Democrats who oppose the deal should face career consequences.