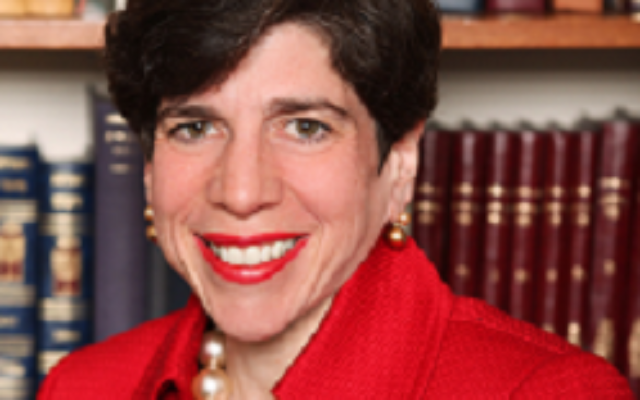 In what has been a troubling, even worrying U.S. election season, we have reason for optimism and an excellent choice. Amid all the inflammatory rhetoric that has characterized this election, former Sen. and Secretary of State Hillary Clinton has consistently offered rational, productive, achievable answers to the serious problems our nation faces. It is time to set out on a path on which we can address difficult challenges rather than vent anger and cast blame.

In choosing a leader, I look through the lens of Jewish values and teachings as well as the strengthening of the relationship between two great democracies, the U.S. and Israel. Jewish tradition is replete with guidance directing us to aid the poor, to care for the sick, and to provide charity funds that establish people on firmer footing. On all of these accounts, Clinton’s policies and record are, in my opinion, the most consonant with those values and priorities. Jewish tradition and history speak to the obligation to welcome and care for the vulnerable — the widow, the orphan and the stranger. Deuteronomy 10:19 enjoins us to “love the stranger for you were strangers in the land of Egypt.”

As Jews, the discussion of immigration resonates deeply. We know what the blessing of our ancestors’ immigration to America has meant to our families; we also know the perils that our relatives faced fleeing persecution and death in the Shoah. Recognizing that immigrants are an engine for vitality that pulls our country forward, we know that we cannot cross a bridge to safety only to pull it up behind us, nor should we build walls around our country to keep people out. Clinton understands that immigration “is at heart a family issue.”

Underlying the vitriol in the immigration debate this election season is the profound income inequality that our country faces. Americans haven’t seen any increase in their adjusted-for-inflation wages in the past 15 years. The fear that more low-wage immigrant workers in the country will increase the real suffering of America’s working poor must be addressed through sound policy, not through fanning the flames of anger. Here again, Clinton has offered real solutions to address these profound challenges.

People need wages that allow them to live with dignity and access to education without crushing debt. At each rung of the income ladder, Clinton proposes policies to bring improvement: a $12 minimum wage, laws to prevent worker misclassification and wage theft, extending a tax credit of up to $2,500 per student to help with college costs and a New College Compact to make higher education available to many for whom it currently is not.

Health care continues to be a daunting challenge for most Americans. Hillary Clinton has spent decades, probably longer than any politician currently on the political scene, working on this key issue. The Affordable Care Act has allowed more Americans to become insured than ever before, and what we badly need — and deserve — is someone in office committed to improving the ACA, not starting from scratch with untenable ideas.

American women across today’s generations have discussed the significance of the prospect of a first woman president. While some of us, including me, were shaped by the models of pioneering women such as Clinton, the success of the women’s movement leads younger women to judge leaders by their commitments and achievements, not by their genders. Whatever the meaning of Hillary Clinton’s gender to a particular Jewish woman, her exceptional commitment to women has been consistent with the values and goals that Jewish women have sought as part of the larger society. She continues to champion women’s reproductive rights and right to equal pay and workplace treatment. As the Passover season approaches, we especially can appreciate that as secretary of state, she worked to protect women subject to sexual and other forms of slavery and abuse.

As both secretary of state and as senator, Clinton also demonstrated her commitment to Israel. While she was at the State Department, military support to Israel increased by 20 percent and she led the way on developing a tough Iran sanctions regime. During her tenure, Prime Minister Benjamin Netanyahu called U.S.-Israel security cooperation “unprecedented.” Secretary Clinton fought the Boycott, Divestment and Sanctions movement and defended Israel’s legitimacy around the world. Her record on Israel is unparalleled.

Judaism sets high expectations and high goals for us. We are to see all people as created “b’tzelem Elohim,” all of us of both equal and infinite value. We are to care for our own community and to work for the betterment of the world. It is time to stop wringing our hands about the current political discourse and start rolling up our sleeves. In Hillary Clinton we have an experienced leader with a record of action and resilience who can solve problems and bring us closer to the ideals that inspire us.

Rabbi Julie Schonfeld is executive vice-president of the Rabbinical Assembly, the association of all the Conservative/Masorti movement rabbis in the world. The views expressed here are hers alone and do not necessarily represent those of the R.A. This piece is written in her individual capacity and not in her official capacity.