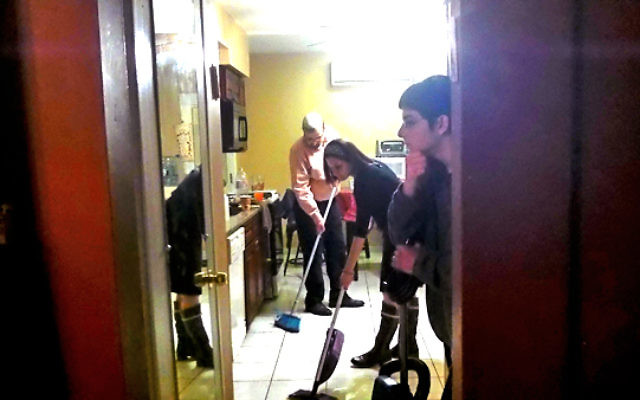 The author, Barak Hagler, pauses to contemplate cleaning while his family scours the kitchen for Passover.

Editor's Note: This article was originally published in March 2013.

With Purim fun and silly costumes behind us, there are only a few days standing between us and Passover. Before the arrival of the holiday come lots of preparations — dusting off Haggadot, buying matzah and, of course, stocking up on kosher-for-Passover marshmallows.

Weeks, and even months before Passover, families begin their cleaning. The importance of Passover cleaning is instilled in children from their earliest years in school. Recently I heard a kindergarten class in my school singing, “Every room, every corner, get a broom,” in reference to Passover cleaning.

“It makes sense to clean our houses for Passover,” said Elchanan Preil, a freshman at Rav Teitz Mesivta Academy of the Jewish Educational Center in Elizabeth, N.J. “It is in accordance with the Torah, and it’s a great way to prepare for Passover, a chance to get all your Passover utensils ready.”

In school, everyone is required to clean out his or her locker even if food never entered the space. We have to dump out all our books and use wet paper towels to remove all traces of food. Once again, scrupulous attention is paid to removing miniscule crumbs from an area of space in your possession.

For most Jewish holidays students get off from school a day early, but for Passover we get multiple days off. Why? “There is a lot of cleaning to be done to prepare for Passover and the students need to be home to help,” said Rabbi Chaim Hagler, assistant principal of Bruriah High School for Girls in Elizabeth, N.J.

Why is this so? Why is it so imperative that there is absolutely no leavened bread in our possession? And why involve teens? We get so much time off for Passover, but can it be just to clean? Jewish mothers are always on top of cleaning; they’d be able to manage Passover cleaning just as well without the kids at home. My mother is capable of cleaning for Passover with or without me.

An important concept in Judaism is that the holidays aren’t supposed to be just a remembrance; rather, we are supposed to relive the miracles and events of the holiday. And this is why cleaning is emphasized before Passover: as a reminder to purge ourselves of evil influences.

One of the hardest things that the Jews had to do when leaving Egypt was getting rid of all the negative influences that the Egyptians placed upon them. Evil influences included the worshipping of idols and the notion that life in Egypt was better than living in the Land of Israel.

Sadly, many Jews died during the plague of darkness. These were the Jews who were unable to overcome these evil influences. They assimilated into the Egyptian ways and didn’t want to leave Egypt for Israel. There was no hope for these Jews; they died in darkness so the Egyptians could not see their punishment.

Nonetheless, a full nation of Jews overcame all the evil. They purged themselves by believing Moshe’s promise that God would free them; they avoided assimilation, and followed the commandment to sacrifice a lamb. These actions showed full detachment from the evil influences of Egypt. Therefore we merited coming out of Egypt, receiving the Torah and becoming God’s chosen people.

Cleaning for Passover is part of reliving the beginning of the exodus. Not that we are slaving away just like the Jews did in Egypt — quite the contrary. By cleaning, we are imitating the purging of bad influences from ourselves. The Jews “cleaned” themselves so they would not be ashamed to stand before Hashem. Their work of self-purification wasn’t slavery, it was for personal gain.

We imitate the Jews cleansing their souls by cleaning our houses. When we clean our houses we don’t slave away for others, rather we are working for ourselves so that we will have the freedom to go anywhere in our house on Passover. We are not embarrassed to show anyone our rooms, because they are so clean.

But the connection with purification goes further. In the times of the Temple, if a man spoke too much lashon hara (evil speech) he would be afflicted with leprosy. But first as a warning, his house would be stricken with colored spots. This is similar to the message of cleaning. The house serves as a reminder of what we should be doing. Just like the man’s stricken house reminded him to stop speaking slanderously, so too our housecleaning is a reminder to cleanse our inner selves.

This is why teens are encouraged to help clean. Being tech-savvy, we are constantly bombarded with negative propaganda and influences. Don’t believe me? Just take a look at every social network. Facebook, Twitter, MySpace and others have inappropriate pictures and comments.

If someone reads a humorous comment, but it contains a curse, the idea may start to leech into him that swearing is OK in certain situations and it only gets worse from there. So we are given lots of time to clean and absorb the real message of cleaning the house: take time to differentiate between the positive and the negative influences in our lives and purge ourselves of all the negative.

In a way, Passover is like Rosh HaShanah, a time to reflect before a new year. Then again, Pesach is the beginning of a new year.  The Torah calls it chodesh harishon, the first month.

“I always clean my room and I’ll do whatever else I'm asked to do,” said Elchanan via email, when asked about his cleaning habits. “You should do whatever you can to clean and prepare for Passover physically and spiritually whether your house or make a promise to yourself to improve and be more spiritual.” When asked about something he might try to improve for Passover, Elchanan wrote, “I’ll focus more on my davening, especially Shemona Esrei.”

Passover cleaning is not for the benefit of others — it is for us — to give us a chance to reflect on our lives and appreciate our freedom. Now I don’t want to tell you what to do, but maybe take a little time and see what social media is doing to you. While physically cleaning around the house, maybe think about cyber cleaning your Facebook, Twitter or other social network. I’m not telling you to quit using social networks. I’m just telling you to clean out the negative sides of them.

So as you’re sweeping and vacuuming, take a moment and think about the meaning. Set the stage for your personal exodus by purging yourself of evil influences and removing your spiritual chametz.

That YouTuber we like who curses a little too much — maybe hold off on him for a few weeks like I’m trying to do. Or that TV show with jokes that send us rolling on the floor, but with one too many inappropriate comments? Stop watching it.

Think about what the Jews did in Egypt to merit the exodus. Why not imitate them and do some self-cleaning to garner a small feeling of freedom and gain appreciation for Passover. Trust me, if you do try, no plagues will cross you. In fact, you might even get to cross the sea to freedom.