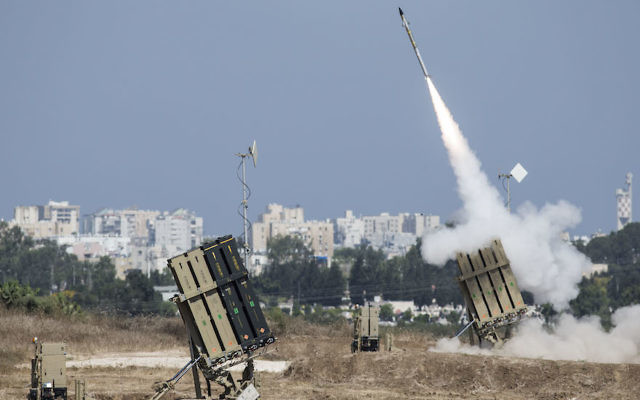 The Iron Dome air-defense system firing to intercept a rocket over the Israeli city of Ashdod, July 8, 2014. (Ilia Yefimovich/Getty Images)

A standalone bill approving the funding passed overwhelmingly Thursday, but the debate over the missile defense system laid bare the tensions that some progressives have unleashed among Democrats.

The progressive Democrats who are deeply critical of Israel vowed to vote against that bill if it included Iron Dome support, simultaneously showing their budding strength but also making clear how far outside the mainstream they are on issues related to Israel. Both moderate Democrats and Republican lawmakers who voted against the overall spending bill overwhelmingly supported the Iron Dome spending. Only nine Democrats and 1 Republican voted against the funding bill Thursday; Ocasio-Cortez voted “present.”

While the Democratic mainstream, including the Biden administration, remains unchanged on issues related to Israel, a number of progressives during the Gaza conflict called for diminishing or ending defense assistance for Israel, which runs about $3.8 billion a year, including hundreds of millions of dollars for Iron Dome.

This week, some progressives said they were angry to have the new money inserted into the funding bill without warning or debate.

Rep. Jamaal Bowman, D-Bronx/Westchester, told Bloomberg that the problem was that the Iron Dome provision had been added in at the last minute, and that there had been no proper discussion.

“It’s not about Israel, it’s about, once again, leadership, throwing something on our table last minute and expecting us to decide in five minutes what to do with it, that’s the bigger problem,” Bowman said.

At least one member of the “Squad,” Rashida Tlaib of Michigan, opposed the $1 billion spending not just on procedural grounds. In a tweet she cast Iron Dome as part of a system designed to oppress Palestinians. “We must stop enabling Israel’s human rights abuses and apartheid government,” she said Wednesday in announcing her planned “No” vote.

The Biden administration is on board with the $1 billion infusion, and President Joe Biden himself assured Israeli Prime Minister Naftali Bennett last month that the money would come through.

“Whatever your views on the Israeli-Palestinian conflict, using a system that just saved hundreds, if not thousands, of lives as a political chit is problematic,” she said.

Rep. Ritchie Torres of the Bronx — a pro-Israel progessive — agreed. “A missile defense system (i.e. Iron Dome) defends civilians from missiles. Hence the name,” he tweeted. “Only in a morally inverted universe would this be considered a ‘controversy.’”