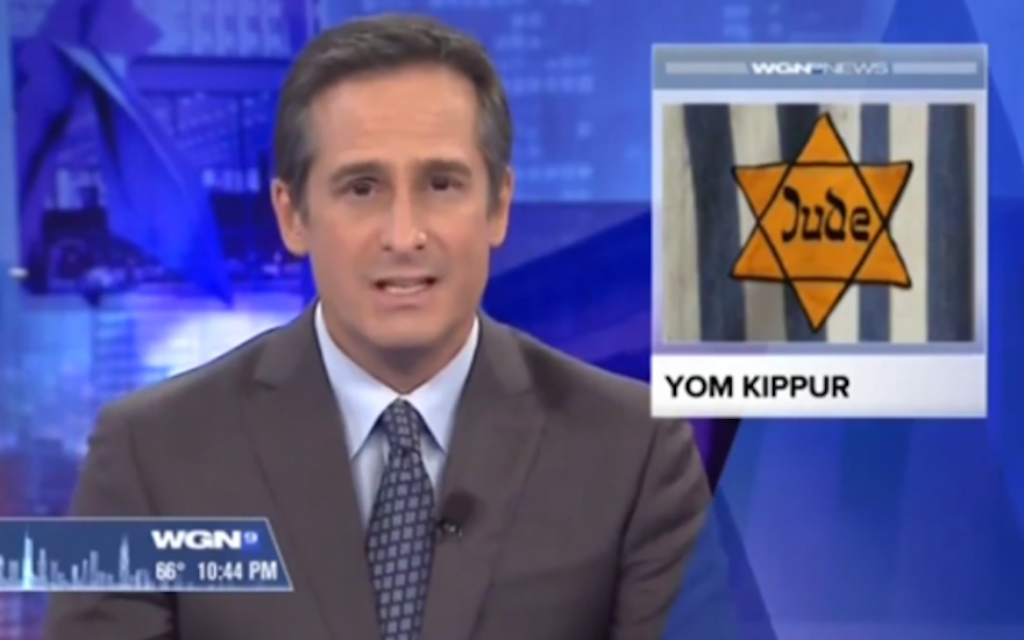 A Chicago television station apologized for using a graphic of a yellow badge that the Nazis forced Jews to wear during the Holocaust to illustrate its report on the start of Yom Kippur.

WGN aired the report on Tuesday night, hours into the Jewish Day of Atonement. The badge — shaped like the Star of David and featuring the word “Jude,” German for “Jew” — appeared atop concentration camp-uniform stripes and above the caption “Yom Kippur.”

WGN sought atonement for the graphic on Wednesday. The anchor who delivered the Yom Kippur report said on air:

“Major correction tonight: We couldn’t see this from the set here, but in our story about Yom Kippur we apparently used a symbol that is extremely offensive to the Jewish community. We mistakenly showed a symbol used by Nazi Germany to identify Jews. We deeply apologize for that error.”

“Regrettably, we failed to recognize that the image was an offensive Nazi symbol. We are extremely embarrassed and we deeply apologize to our viewers and to the Jewish community for this mistake.

“Ignorance is not an excuse.

“Please know we are reviewing our in house policies and changes have already been made to make sure a hurtful oversight like this never happens again.”

The Nazis began compelling Polish Jews to wear identifying badges following the German invasion of the country in 1939. By 1942, Germany and the states under its control were requiring Jews to wear the badges. The sole exception was Denmark, where King Christian X is said to have threatened to wear the badge himself if it were imposed on his country’s Jews.

Holocaust scholars say the badges were a means of isolating and dehumanizing European Jewry — a step toward the Final Solution. The practice of making Jews wear identifying clothing dates back to the Middle Ages.

Buzzfeed has posted videos of the original broadcast and the apology.