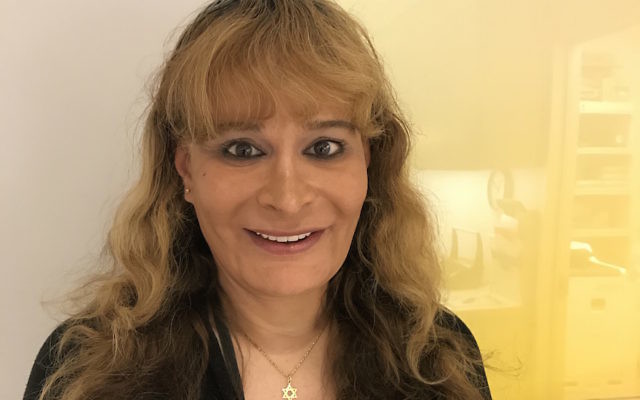 NEW YORK (JTA) — The journalist who first reported the ejection of three Jewish women from Chicago’s Dyke March tweeted that she was removed from her reporting job because of that article.

In a tweet Monday, Gretchen Rachel Hammond wrote to Dyke March’s Twitter account that “You attacked, humiliated and robbed me of a job.” Hammond confirmed to JTA on the same day that she wrote the tweet.

Hammond said she could not elaborate on her tweet, citing an agreement with her employer, the Windy City Times.

You attacked, humiliated and robbed me of a job. No tears. I forgive you. Just hope you learn how destructive and pointless hatred is.

Hammond, formerly an award-winning reporter for the Chicago LGBT newspaper, was transferred to its sales department after being the first to report that three Jewish women carrying rainbow flags emblazoned with Jewish stars were kicked out of the June 24 march. The women, as well as Jewish organizations, have accused the Dyke March of anti-Semitism.

March organizers said the women were ejected because they were carrying flags reminiscent of the Israeli flag at an anti-Zionist event and had “repeatedly expressed support for Zionism during conversations” with other marchers.

On June 28, an organizer of the march told Hammond in an interview that she and the newspaper had “failed in its journalistic mission.”

The Dyke March was founded over 20 years ago as a left-wing, women-centered alternative to Chicago’s annual Pride Parade, which the Dyke March’s website calls “corporate, white male dominated.” The march bills itself as anti-racist, anti-violent and anti-Zionist. This year’s march drew some 1,500 people.

Hammond, who is Jewish, told JTA that in the wake of her article, she received dozens of threatening anonymous phone calls. She said one caller called her a “kike,” while others told her she should lose her job or said she “betrayed” the LGBT community.

“One of them said, ‘I’m going to get your bitch ass fired,’” Hammond told JTA of calls and text messages she received. “It was vicious. It wasn’t even a request for dialogue. It was, ‘You f**ked with us. We’re going to f**k with you.’ They pretty much blamed me for the whole thing blowing up at them.”

The Dyke March itself has fielded criticism for using an anti-Semitic slur, tweeting on July 13 that “Zio tears replenish my electrolytes.” White supremacists, including former Ku Klux Klan leader David Duke, have used the term “Zio,” derived from Zionist, as a slur for Jews.

On July 14, the Dyke March deleted the tweet and apologized, saying it “didn’t know the violent history of the term.”

Sorry y'all! Definitely didn't know the violent history of the term. We meant Zionist/white tears replenish our electrolytes ????

Hammond was transferred to the sales department on July 10, and told JTA that she was looking for a reporting position elsewhere.

Windy City Times Publisher Tracy Baim confirmed last week that Hammond had been moved, but would not elaborate. Regarding the newspaper’s coverage of the Dyke March, Baim said the editors “stand by our reporting by Gretchen and our other reporters on that story.”

Laurel Grauer, one of the women ejected from the march, works for A Wider Bridge, a pro-Israel LGBT organization. She said she has brought the flag to the march for years in order to celebrate her LGBT Jewish identity.

But in a June 27 statement, march organizers said the women were ejected “for expressing Zionist views that go directly against the march’s anti-racist core values.” The statement claimed that the women were “disrupting chants,” which Grauer denies. It called Zionism “an inherently white-supremacist ideology.”

Both Grauer and Hammond told JTA that they have attended the march in past years without incident. Hammond said this year’s march felt more vitriolic.

“There was something different this year, for this to happen, for the kind of hatred and bile that’s coming out of them,” Hammond said. “They have chosen to exercise their anger against Israel, but do it in an anti-Semitic way.”