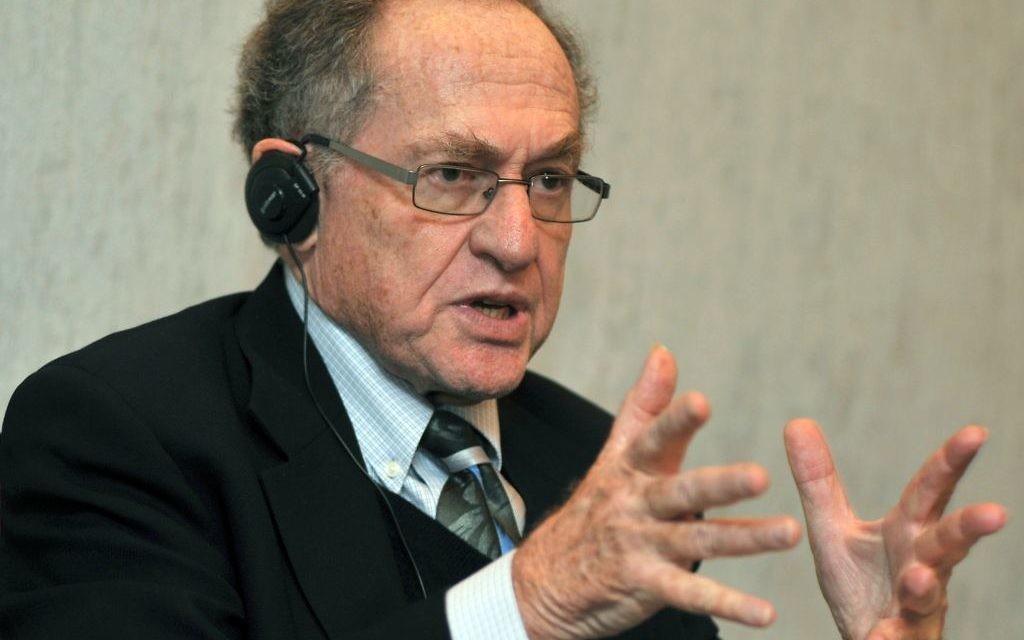 Four years after his life was turned upside down by charges he committed extortion and bribery, chasidic sex abuse whistleblower Sam Kellner is fighting back against those he thinks wronged him in the press. Late last year he sued The Jewish Daily Forward for defamation. And last week he filed papers initiating a defamation action against Alan and Nathan Dershowitz, the high-profile lawyers who represented, Baruch Lebovits, who Kellner alleges sexually abused his son.

Kellner, who brought allegations of his son’s abuse by Lebovits to the police in 2008, worked closely with law enforcement to bring forward additional Lebovits victims. Lebovits was convicted in 2010 and sentenced to 10 ½ to 32 years in prison. A year later, in 2011, Kellner was arrested.

In 2012, Lebovits’ conviction was vacated on appeal because of a prosecution error, and a new trial was ordered. Lebovits ultimately pleaded guilty in May of 2014, avoiding a second trial. (He was sentenced to two years but because of time served and what’s called “good time” credits, he ended up serving only a few months.) For his appeal and subsequently, Alan and Nathan Dershowitz were part of Lebovits’ defense team.

The case against Kellner — which included allegations that he paid one man to falsely testify in a grand jury that he was abused by Lebovits and also sent emissaries to attempt to extort the Lebovits family for hundreds of thousands of dollars in exchange for a promise he could persuade the witnesses against him to drop their charges — was based virtually exclusively on evidence brought directly to the former Brooklyn District Attorney Charles Hynes’ Rackets Division by members of the Lebovits family, their supporters and paid agents. Kellner’s attorneys and others have argued that the charges against Kellner were fabricated in order to get Lebovits out of jail and undermine the district attorney’s ability to retry him.

In March of 2014, after a review of the case, current Brooklyn district attorney Ken Thompson asked a judge to dismiss the charges against Kellner. Speaking on the day of the dismissal, ADA Kevin O’Donnell told the court that the witnesses against Kellner “lack credibility to such a degree that their testimony cannot be trusted” and thus the case could not be prosecuted.

On that same day, according to a summons with notice filed by Kellner in Manhattan on Friday, both Alan and Nathan Dershowitz made defamatory statements about Kellner. According to the filing, Alan Dershowitz “published to a third party without privilege or authorization the defamatory statement that the Brooklyn District Attorney possessed a ‘smoking gun’ recording of Plaintiff that proved he committed extortion.”

This is a reference to a column in The New York Times, written by Michael Powell, in which Powell wrote that after the dismissal of Kellner’s case, “Mr. Dershowitz roamed the hallway … playing with a grin the more disquieting for the fact that his eyes ran cobalt. He spoke ominously, as he has for years, of new evidence. ‘This case is not over,’ he said. Mr. Kellner ‘may very well still be going to jail because this tape is the smoking gun.’”

The filing also notes that on that same day Nathan Dershowitz, “published to a third party without privilege or authorization the defamatory statement that the Brooklyn District Attorney possessed ‘tape recordings’ that proved Plaintiff was guilty of extortion.”

This is a reference to a New York Daily News story in which Nathan Dershowitz is quoted as saying, “Any suggestion that they can’t get a conviction is strange, and what makes it stranger is that they have tape recordings [of the alleged extortion].”

Kellner, who is representing himself, has yet to file a complaint, which would provide more detail about the basis for his claims and the type of relief he is seeking.

In response to the news of the filing, Alan Dershowitz told The Jewish Week that “[e]verything I said is constitutionally protected speech and advocacy.”

Andrew T. Miltenberg, an attorney who specializes in defamation law, among other areas, disagrees.

“First, the statement is poor form and I believe, irresponsible,” Miltenberg told The Jewish Week.

“It is not protected by a qualified privilege since there was no pending action at the time of the statement, nor was the statement made in a pleading or otherwise inside a courtroom during a pending action. The statement itself is defamatory,” he continued “as it states that there is evidence that Mr. Kellner committed a crime, notwithstanding the fact that the case against him was dismissed.”

For his part, Nathan Dershowitz, told The Jewish Week that “Mr. Kellner’s filing is frivolous and your reporting such a frivolous claim is bad journalism.” He added that “it will be interesting exploring Kellner’s reputation to see if and how he alleges he has been specifically damaged.”

According to Miltenberg, Kellner would likely assert a claim of what is known as defamation per se, which does not require him to allege special damages. Damages are assumed because he was accused of a crime. That said, Miltenberg told The Jewish Week that, in his view, Nathan Dershowitz’s statement is not defamatory.

As for Kellner, he would not comment on the filing except to say that he is not suing “for financial gain.”

“This is just to show for every kid, no matter how small you think you are, in the end the truth is going to come out,” he said. “This is to give courage to those people. The top-notch lawyers are coming against you. You feel like you’re just a loner. But justice is going to come out in the end.”