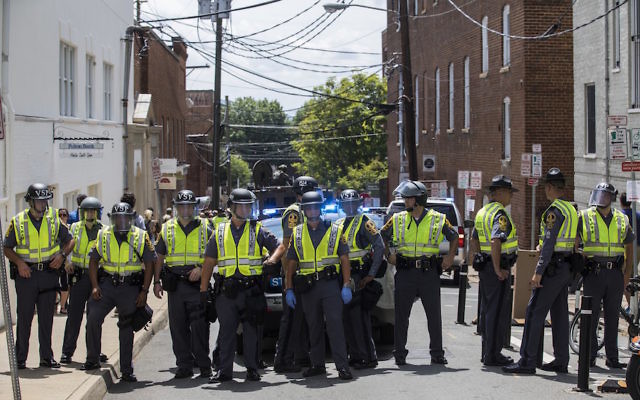 Police blocking off the street after a car rammed into a crowd of counterprotesters in Charlottesville, Va., Aug. 12, 2017. (Samuel Corum/Anadolu Agency/Getty Images)

Local officials said police provided protection to a synagogue during a far-right rally last weekend in Charlottesville, Virginia refuting a claim by a Jewish community leader that they had refused to do so.

On Friday, Charlottesville City Manager Maurice Jones said it “is simply not the case that Congregation Beth Israel was left unguarded” during Saturday’s event, when neo-Nazis and white supremacists gathered in the city. The synagogue’s senior rabbi also seemed to confirm the police statement.

“Police stationed an officer on the corner of the block where the synagogue is located, plus another 32 officers about one block away in the other direction,” Jones said in a statement to JTA. “In addition, we had snipers on a rooftop in close proximity whose primary responsibility was to monitor a two-block radius which included Beth Israel.

“We also had a group of Virginia State Police officers who were walking a four-block radius between two of our parks on a route that passed the synagogue on several occasions throughout the day’s events.”

The synagogue’s president, Alan Zimmerman, had written in a blog post earlier this week that “[t]he police department refused to provide us with an officer during morning services.”

However, Congregation Beth Israel’s senior rabbi seemed to confirm the police account of the incident in a statement Thursday.

Rabbi Tom Gutherz said he and Zimmerman had met with the police on Wednesday and “officials reviewed with us the security provisions they made for the safety of our congregation during the protests. Based on our discussion, we are now confident that the steps they took were carefully considered to protect us and were effective. We note that we had also met with and spoken to the department prior to the rallies as part of our preparation.”

In his blog post, Zimmerman said the synagogue had hired security after police allegedly did not provide protection.

“On Saturday morning, I stood outside our synagogue with the armed security guard we hired after the police department refused to provide us with an officer during morning services. (Even the police department’s limited promise of an observer near our building was not kept — and note, we did not ask for protection of our property, only our people as they worshipped),” he wrote in the post on ReformJudaism.org, which was titled “In Charlottesville, the Local Jewish Community Presses On.”

The synagogue did hire security guards for the first time in its history ahead of the far-right event at Emancipation Park, a short block from the synagogue. Rally participants chanted racist and anti-Semitic slogans, and a counterprotester was killed when a car driven by a suspected white supremacist plowed into pedestrians.

Zimmerman, like other eyewitnesses, described intimidation by rally participants or supporters.

“Several times, parades of Nazis passed our building, shouting, ‘There’s the synagogue!’ followed by chants of Seig Heil and other anti-Semitic language,” he wrote. “Some carried flags with swastikas and other Nazi symbols.”

In a separate interview, Rabbi Rachel Schmelkin, an educator at the synagogue, noted that members of antifa, the anti-fascist street movement, also defended clergy and houses of worship during the rally.

“There was a group of antifa defending First United Methodist Church right outside in their parking lot, and at one point the white supremacists came by and antifa chased them off with sticks,” she told Slate.

Other members of the clergy gave similar accounts to Slate, praising left-wing counterprotesters for protecting them from the far-rightists.

“Based on what was happening all around, the looks on [the faces of the far-right marchers], the sheer number of them, and the weapons they were wielding, my hypothesis or theory is that had the antifa not stepped in, those of us standing on the steps [of Emancipation Park] would definitely have been injured, very likely gravely so,” Brandy Daniels, a postdoctoral fellow in religion and public policy at the University of Virginia, told Slate.

President Donald Trump blamed the violence at the rally on “many sides.”