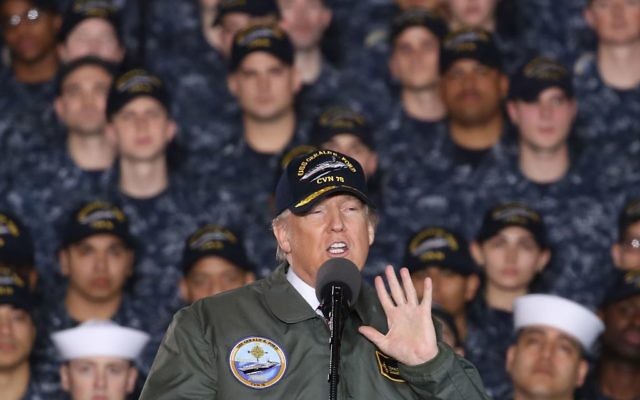 U.S. President Donald Trump speaks to members of the U.S. Navy and shipyard workers on board the USS Gerald R. Ford CVN 78 that is being built at Newport News shipbuilding, on March 2, 2017 in Newport News, Virginia. Getty Images

I grew up as an Orthodox Jewish boy born in 1947 in Newport News, Virginia. I was aware from my earliest years that Newport News had welcomed my immigrant grandparents and their children from the ravages of Eastern Europe when they first arrived in Tidewater during the early years of the 20th century. My grandmother was grateful her entire life to Virginia for the shelter it provided.

The years of my youth were racially charged ones and my parents were ardent proponents of integration of public facilities and schools during the turmoil that wracked those years. I myself had a passion for politics and served as a page in the Virginia State Senate in 1962, and again as a page to the Virginia delegation to the 1964 Democratic National Convention in Atlantic City. After graduating from Newport News High School in 1965 as president of the overwhelmingly non-Jewish student body, I received degrees from both the College of William and Mary and the University of Virginia. Virginia is not just a spot on the globe to me. It is a place I call home. My reactions to the events in Charlottesville and their aftermath this week take on profoundly personal dimensions for me.

That the President of the United States now enunciates a false symmetry between the despicable actions of the white nationalists and neo-Nazis who organized the original march and those who gathered together to protest against them is morally nauseating. Countless people have rightfully noted this. I share their outrage and condemnation.

However, as I share their negative judgment and disappointment on how President Trump has behaved and what he has said, I also assess his actions and statements against the backdrop of the Virginia where I grew up, and contrast his deeds and utterances to those of two governors of Virginia — Lindsay Almond and Linwood Holton — during the racial crises that roiled Virginia during the 1950s and 1960s. These men understood with great moral clarity the challenges of their day and provided models of symbolic moral leadership that remain instructive now.

During the 1950s, Senator Harry Flood Byrd controlled Virginia politics. In response to the 1954 U.S. Supreme Court decision in Brown v. Board of Education, Byrd announced that Virginia would adopt a policy of “massive resistance” that called for the closing of all public schools rather than allowing any racial integration. Four years later, Attorney General Lindsay Almond ran for governor on a platform of vigorous support for this policy, and won. However, shortly after he assumed office in 1958, the demands of leadership caused Almond to reverse course and he decided that “massive resistance” was a stance that would bring moral ruin to the Commonwealth. He courageously abandoned the policy Byrd had fashioned and insisted that Virginia would obey the law of the land as dictated by the Supreme Court – the schools of Virginia would begin the process of racial integration.

Byrd and his allies regarded Almond as a traitor. However, Almond refused to bow to Byrd and stated, “No error could be more grave nor mistake more costly, than to succumb to the blandishments of those who would have Virginia abandon public education and thereby consign a generation of children to the darkness of illiteracy, the pits of indolence and dependency and the dungeons of delinquency. I call upon all Virginians who believe in the soundness and righteousness of that position to rally to my support before it is too late.” Almond never held elective office again in Virginia.
One decade later, Linwood Holton became the first Republican governor in Virginia since Reconstruction. He assumed office in 1970, a time when support for school integration remained the most profound moral test facing white Virginians. During his first year as governor, Holton recognized that “integration presented” a “particular challenge” to him and his family. He and his wife decided that they would comply with both “the letter and the spirit” of the Brown decision. In his inaugural address, Holton stated that his goal was to make Virginia a model of race relations, and he and his wife decided that their children would attend “the public schools, substantially all black,” instead of segregated private ones. As the leader of the Commonwealth, Holton felt it was morally incumbent upon him and his family to “set an example” that would help “Virginians carry out their responsibilities to the system of laws embodied in our Federal and State Constitutions.”

In a memoir, Governor Holton wrote, “Our children were very special. They accepted their unique challenge to help achieve an integrated society and a climate of true racial harmony. They today recognize that racism and bitterness continue, but all now continue the effort in their respective fields.” Among those children is Anne Holton, the former secretary of education for the Commonwealth of Virginia and the wife of Senator Tim Kaine.

Governor Almond and Governor Holton understood that America begins not with a place or with a people, but rather with an ideal. It is an ideal of equality and dignity for all persons put forth by Thomas Jefferson in our Declaration of Independence. Our greatest leaders have always known that this idea animates our nation. Governor Almond and Governor Holton each grasped this truth, and they became models of moral leadership during a time of challenge. Their deeds shine out from the crucibles of racial crisis as beacons of righteousness even today. President Trump should learn a great deal from them. It is hopefully not too late.

Rabbi David Ellenson is Director of the Schusterman Center for Israel Studies at Brandeis University and served as President of Hebrew Union College-Jewish Institute of Religion from 2001-2013.