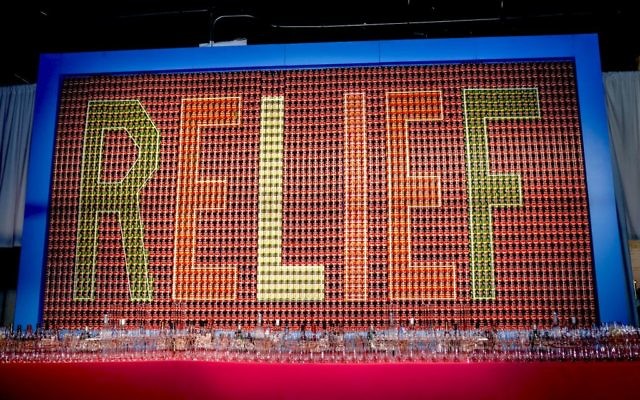 A century after the founding of the Federation of Jewish Philanthropies, the annual campaign of UJA-Federation of New York — the agency formed by a merger with the United Jewish Appeal three decades ago — has had its best fundraising year on record.

The 2016-17 annual campaign, which closed on June 30, raised a total of $157.4 million, $4 million more than last year, the philanthropy announced this week. And the total fundraising drive, which includes planned giving and endowments, capital projects and special initiatives, increased by $30.6 million to $238.2 million.

This was the fifth year in a row that UJA’s annual campaign raised more money than the previous year, officials said.

Both 2016-17 figures are all-time records for the merged organization, which stressed its centennial during the past year’s fundraising efforts, “Everything was up this year,” said Eric Goldstein, UJA-Federation CEO. “The focus on the centennial was a rally cry for our supporters.”

“It was a way to galvanize more people in the community,” added Mark Medin, vice president of financial resources development.

The number of contributors was significantly higher in recent decades, then it fell sharply and now is coming back up.

“The fact that the donor base is increasing, even slightly,” is a “significant achievement,” Goldstein noted.

Medin said the increase in the 2016-17 totals reflected “across-the-board increases” among all UJA-Federation divisions. The Wall Street Division and Real Estate registered “significant increases,” along with “long-time major philanthropic families” as well as the Entertainment Division, Lawyers Division and Women’s Division, he said.

UJA-Federation announced that during the last year it has initiated “three groundbreaking capital initiatives: transforming Henry Kaufmann Campgrounds to provide a meaningful Jewish camp experience to over 6,000 children each summer; creating innovative community resource hubs in Brooklyn and Queens to address Jewish poverty; and “building the Kirsh Family Jerusalem Arts Campus, a cultural hub in the heart of Jerusalem that will revitalize the city and help ensure a vibrant future for Jerusalem.”

The fundraising results of UJA-Federation’s annual campaign and total campaign returned this year to the levels from before the recession of 2008.

Since 2008, fundraising in the wider philanthropic world has not experienced a similar increase, said Medin, who observed: “We’re bucking a trend. Philanthropy has been relatively flat in recent years.”

General chairs of the 2016-17 campaign were Alisa Levin and David Moore.