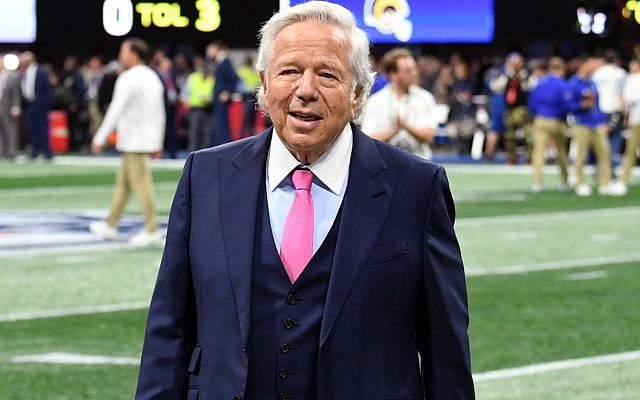 Kraft, 77, and two dozen other defendants were charged Monday afternoon with first-degree misdemeanors.

Police say they have video of Kraft engaging in paid sex acts with a worker at the Orchids of Asia Day Spa in Jupiter on two occasions, including on the morning of the AFC championship game.

Kraft denies being involved in “any illegal activity,” a spokesman told reporters.

The charge carries a mandatory $5,000 fine, 100 hours of community service, and a mandatory class on prostitution and human trafficking. The accused also face jail time of 60 days to one year, though prison sentences are not usually given to first-time offenders.

A court date was set for April 24, and Kraft does not have to appear in court but can send an attorney to represent him, according to ESPN.

The accused “come from all walks of life,” Dave Aronberg, the state attorney for Palm Beach County, told reporters at a news conference, and they are all “presumed innocent at this point.” Aronberg said the state attorney will “treat everyone the same, whether you have a lot of money or are indigent.”

The National Football League said in a statement Monday that it will “take appropriate action as warranted based on the facts,” ESPN reported. It could fine Kraft or suspend him from any or all activities involving the Patriots, who won the Super Bowl earlier this month.

Over decades, the Kraft family has given more than half a billion dollars to causes including health care, education, the Jewish community, Christian organizations and local needs.