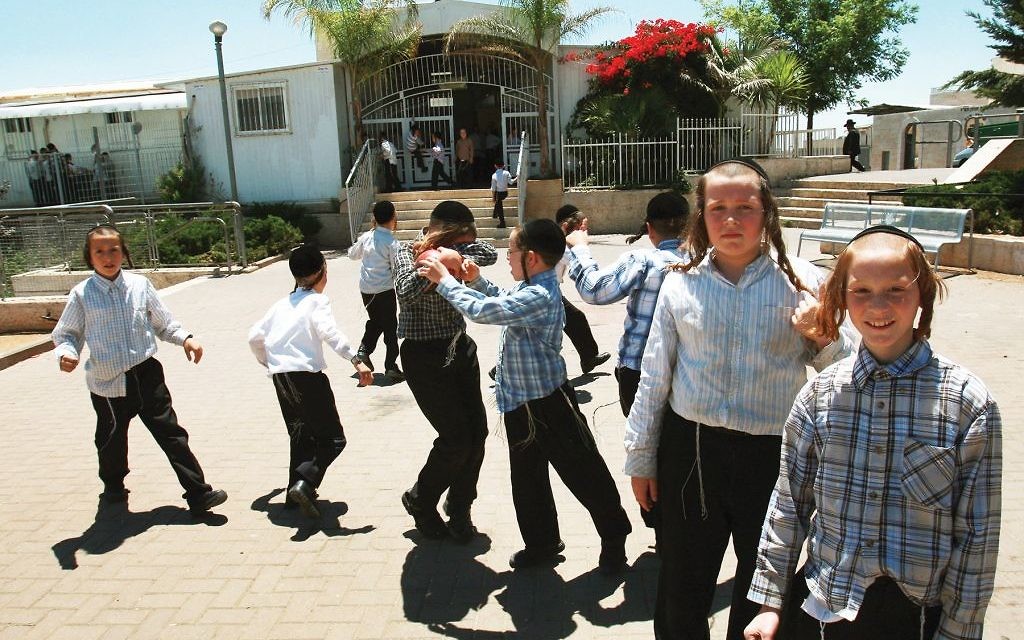 Children at a charedi school in Israel. A study of textbooks used in such schools is coming under fire for “fighting modernity, the central enemy, through textbooks.” Getty Images

Jerusalem — The first-ever analysis of the schoolbooks used in Israel’s charedi classrooms reveals that many of the books contain negative ethnic and racial stereotypes, promote gender inequality, vilify Reform Jews and portray the peace process as a misguided action by Israeli leftists.

While these findings may come as no surprise to those acquainted with Israel’s charedi education system, the fact that these textbooks are officially “recognized” by the Ministry of Education “is troubling,” said Marcus Sheff, CEO of IMPACT-se, the Israeli research and policy organization that carried out the analysis.

“The Ministry of Education has to pay far greater attention to supervising books which are taught at charedi schools,” said Sheff, whose organization analyzes a wide range of Israeli, Palestinian and other (including Iranian and Turkish) schoolbooks and curricula for compliance with UNESCO-defined standards on peace and tolerance.

The report, “Haredi Textbooks in Israel: Reinforcing the Barricades,” (impact-se.org) which was released in May, comes at a time when the Israeli government has invested great resources into programs that encourage charedim, and especially charedi men, to join the paid workforce. Government-funded training programs have enabled a few thousand charedi men and women to learn computer programming, graphic design and other practical skills which they employ in mostly gender-segregated charedi workplaces.

Although 70 percent of the charedi community’s women are employed, most are teachers or other low-paid workers. Traditionally, charedi men who do work — about 45 percent — have performed unskilled labor, leading to a high level of impoverishment.

Charedi educators and community leaders, meanwhile, “are fighting modernity, the central enemy, through textbooks, Sheff asserted. “In the real world, charedim are entering society in ever greater numbers, but they’re armed with an education from 50 years ago.”

Most of the textbooks reviewed in the report were written decades ago and never updated to reflect modern national mores and values.

IMPACT-se looked at 93 textbooks for grades 1-12 in the charedi school curricula during the 2016-17 school term. The textbooks cover Hebrew language and literature, history, geography, civics, science and the Bible, subjects most charedi boys do not study past seventh grade, if at all.

The study focuses on the curricula of nine charedi schools that represent the majority of charedi Sephardi, Lithuanian and chasidic groups and institutions. The schools are either totally exempt from Ministry of Education oversight or are “recognized but unofficial” — state-funded but permitted to teach their own curricula with little or no ministry oversight.

The ministry’s hands-off policy is the price various Israeli governments have paid in order to gain the votes of charedi lawmakers, Sheff said.

“We would argue that charedi textbooks should not be treated as just another negotiating point,” Sheff said, noting that “textbooks represent the values that the government and communal leaders want to pass down to the next generation.”

Although recognized by the education ministry, most of the books studied were published by non-government-approved publishers. The ministry did not comment on the report, despite repeated requests from The Jewish Week.

The researchers found that many of the charedi textbooks promote insularity and negative views of “the other.” Reform Jews are vilified and perceived as attempting to create an alternative religion. Leftists and Nationalists (Zionists) are blamed for the alleged attempt to impose secular education. The Israeli-Palestinian conflict is presented as the result of naive compromises caused by dissociation of the Israeli left from their Jewish roots. There is no interest in the nationalist aspirations of the Palestinians.

“Despite their breadwinning role, women are not empowered or encouraged to strive for career success,” the report says.

The textbooks often use offensive language “in relation to that which is perceived as a threat,” the study notes. Perhaps because they are decades old, some of the books include the word “kushi,” now considered a derogatory word for people of African descent.

On a more positive note, the curricula “educate for pragmatism, coexistence and tolerance” if not acceptance. “The curricula do not encourage violence. The overall Haredi attitude is neither anti-Israel nor anti-state. The textbooks teach to respect the law and the civil system of Israel.” The treatment of black people and slaves (in America only) “is devoid of hate and includes much empathy. Discrimination is rejected amid calls for equality,” but stereotypes abound.”

Many of the textbooks, however, promote overt or subtle prejudice.

In an elementary-school reading textbook, a girl named Toby informs her father, who owns a successful events hall, that the five “simple” women (with overtly Mizrachi names and headscarves) who show up for every life-cycle celebration are beggars.

Toby’s father conveys the positive message that she should not judge people based on the way they dress or their status, but the story “reflects a stereotypical attitude towards Mizrachi Jews as being of lower social class.”

A middle-school textbook expresses respect for Theodor Herzl, an assimilated Jew, but claims that “the Zionists made a false god of Herzl.”

A U.S.-focused geography textbook asserts that “a significant portion of young blacks in America are immersed in a life of violence and crime. While there are blacks who have achieved senior positions, the streets of America’s major cities are filled with black criminals.” The book blames the black community’s economic status for much of its woes.

In a tribute to mothers, a Grade 1 reader says, “Mother has great patience

To listen to the crying of the little ones,

To help the older children prepare their lessons,

To wash the dishes and listen to stories,

To hang the laundry and sing us songs.

Dearest mother you worry about everyone:

You respect Father and serve his plate first.”

The father, on the other hand, “enters the house with a broad smile, / And is received like a guest worth his weight in gold.”

“Whether this is in fact the reality of charedi families today is a question mark,” Sheff said. “But it’s certainly the values that charedi educators and leaders want to pass down.”

Tali Farkash, a charedi journalist and activist who has independently written about a problematic geography textbook, said she “wasn’t surprised” by the report’s findings.

“That geography book contains very severe accusations and stereotypes about black people, for example. It uses the word ‘kushim,’ the Hebrew equivalent of ‘nigger,’ in the entire chapter.”

Farkash complained to the education ministry but has not yet received a response. “I don’t think they’ll do anything about this,” she said of the ministry.

Farkash said children learn the values taught in the classroom.

“You can’t depict only girls caring for their brothers and the boys playing or learning Torah, and claim it doesn’t matter. This is the way we are teaching priorities. Of course it matters,” she said.