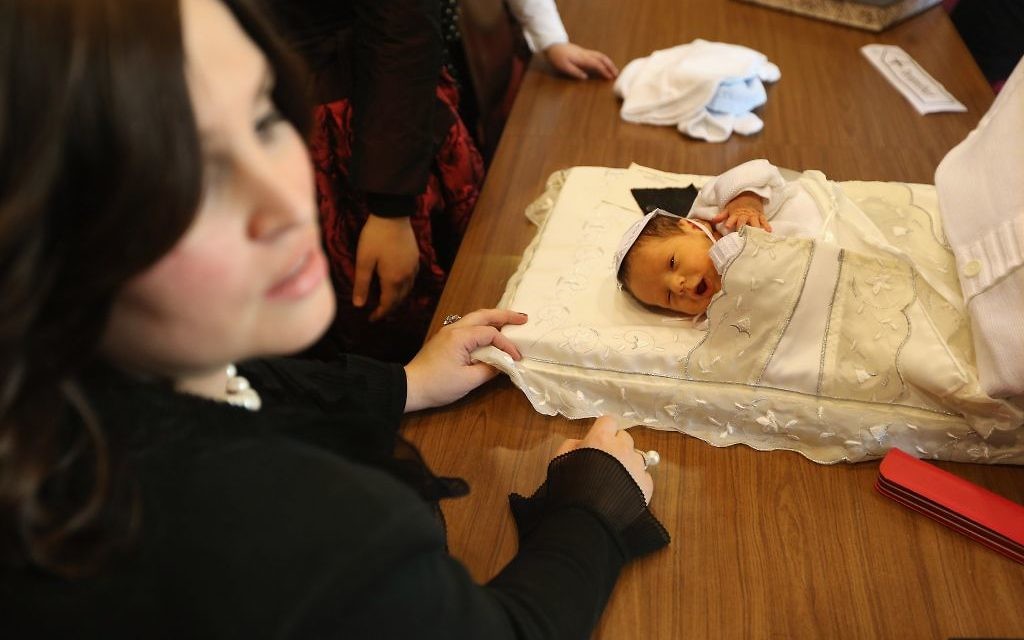 In what appears to be a crack in the united charedi front on metzitzah b’peh, an influential Orthodox leader said this week that the idea of only using mohelim who test negative for herpes for the risky circumcision technique is “worth looking into.”

Rabbi David Zwiebel, executive vice president of Agudath Israel of America, an umbrella organization for charedi Jews, told The Jewish Week during an extensive interview Monday that he was open to the idea if two major problems could be overcome. Both involve the fact that most adults — 73 percent, according the city health officials — have the virus, and, because it’s highly contagious, anyone can catch it at any time.

“How can you be certain that at any given time the mohel doesn’t have the virus? Because he may have been tested a year ago and he may have contracted the virus since then,” he said. “There’s no foolproof way of doing something like that, although if we could find a way of doing that and ensure a proper supply of people who will do metzitzeh b’peh, that would certainly be something worth looking into.”

Rabbi David Niederman, president of the United Jewish Organizations of Williamsburg and North Brooklyn and a leader in the Satmar chasidic community, told The Jewish Week he remains steadfastly opposed to the idea, saying herpes testing would create “a false sense of security.”

“By having a test today, then tomorrow he can have it. So what added security is that at all? Should [the mohel] be tested every day? Should he be tested every half an hour? It simply doesn’t make sense,” Rabbi Niederman said. “Simply to create a false sense of security and hysteria at the same time serves no public health policy and defeats the whole purpose.”

City officials said they would welcome a discussion on such a policy shift if charedi leaders were to bring it to them.

These developments come a week after the de Blasio administration announced a deal with charedi rabbis that scraps a 2012 requirement that parents sign a consent form before metzitzeh b’peh. (In metzitzeh b’peh a mohel sucks on a newborn’s penis after a circumcision to draw blood away from and cleanse the wound. The practice has been linked to the deaths of two infants who it is believed contracted herpes from the mohel.) In place of the forms, which were rarely used, city officials said they will ask obstetricians, pediatricians and hospitals to give out information about metzitzah b’peh’s risks and contact information for the health department should they wish to get more information.

The deal also stipulates that if an infant begins showing symptoms of herpes after metzitzah b’peh, rabbinical leaders will help the health department identify which mohel performed the bris and ask him to be tested for the virus, a level of cooperation that hasn’t happened in the past.

If the mohel tests positive, the city will use DNA testing to determine if it was the mohel who passed on the virus, or if the baby got it from someone else. If the mohel is found to be the culprit, the city’s Department of Health and Mental Hygiene will ban him for life from performing metzitzeh b’peh. The rabbinical coalition has agreed to help enforce the ban.

Already in place is a city regulation that calls for fines ranging from $200 to $2,000 for mohels who defy the ban more than once. The current provision doesn’t rule out criminal charges, and city officials told The Jewish Week Friday that they would pursue them if necessary.

“If we believed a mohel were willfully ignoring the order and endangering others, we would attempt to convince a DA to bring criminal charges,” a city spokesperson said via email. Asked about such cases, a spokeswoman for Brooklyn District Attorney Kenneth Thompson said via email, “We certainly would investigate any referral from the mayor’s office in this situation to determine whether to bring criminal charges. ”

Non-charedi Jews — such as Reform, Conservative and Modern Orthodox — do not practice metzitzah b’peh. The ritual is carried out by chasidic Jews and roughly 70 percent of non-chasidic charedi Jews, according to Rabbi Zwiebel.

Since 2000, there have been 17 reported cases of infants who have contracted herpes following metzitzah b’peh in New York City, according to the Centers for Disease Control. Of those cases, two infants have died and two others suffered brain damage. Others developed other long-term health problems.

Charedi groups who practice the ritual say there is rarely proof that the babies caught herpes from the mohels rather than other caregivers, and that the low incidence of cases don’t warrant banning the practice. The Centers for Disease Control says the practice is too dangerous.

Mayor Bill de Blasio’s decision to drop the consent forms was celebrated as a victory by charedi groups but roundly criticized by the non-charedi world as a political capitulation.

In a sit-down interview with The Jewish Week Friday at City Hall, the city’s deputy mayor for health and human services, Lilliam Barrios-Paoli, defended the decision, saying that even if use of the forms were enforced, that would only serve to further alienate the charedi community and wouldn’t change anyone’s mind.

She called dropping the forms a step toward building trust between the administration and the charedi community and said educating parents about the risks of metzitzeh b’peh in the privacy of a hospital room is much more likely to convince them not to allow the ritual than if they’re asked to sign a form in front of a mohel immediately before the bris.

Pam Brier, a member of the city’s Board of Health, which must approve discontinuation of the forms, has come out in favor of the policy change, calling it a “step forward.”

“For the first time in many, many, many years there’s actually a dialogue going on about how to work together on a common goal, which is to keep babies safe,” said Brier, who is president and CEO of Maimonides Medical Center in Borough Park, which has treated three infants for herpes following metzitzah b’peh in the past 18 months.

“While I can’t predict the outcome because my crystal ball is kind of cloudy, I can tell you that I can’t imagine that it will be worse than what we have now because right now, really nothing is happening,” she told The Jewish Week in an interview Monday.

Since 2005, the city has required hospitals to give all expectant mothers a letter and a fact sheet explaining the risks of metzitzeh b’peh when they register to give birth. A Maimonides spokeswoman said the hospital continues to comply with that regulation. It’s not clear if any other hospitals give out the letter.

Communications broke down between Mayor Michael Bloomberg and charedi groups following the implementation of the consent forms in 2012. That was followed by a charedi lawsuit contesting them as unconstitutional, a case that is still in litigation. Both sides say that the communication between charedi groups and the city is better now than it has been in years.

“There’s a community practicing a religious ritual that they deeply believe in. And there’s a health department saying this is a risky thing. And there was no conversation going both ways. So we had to find that bridge so that we can begin to make sure as much as we can to safeguard the children,” said Barrios-Paoli.

“I’m an anthropologist by training and I understand cultural change,” she said. “You can only do anything if you really have trust.”

Clarification, March 4, 2015: The article has been changed to clarify that what Rabbi Zwiebel said is "worth looking into" is the idea of only using mohels who test negative for herpes for metzitzah b'peh, not banning mohels who test positive for the virus.