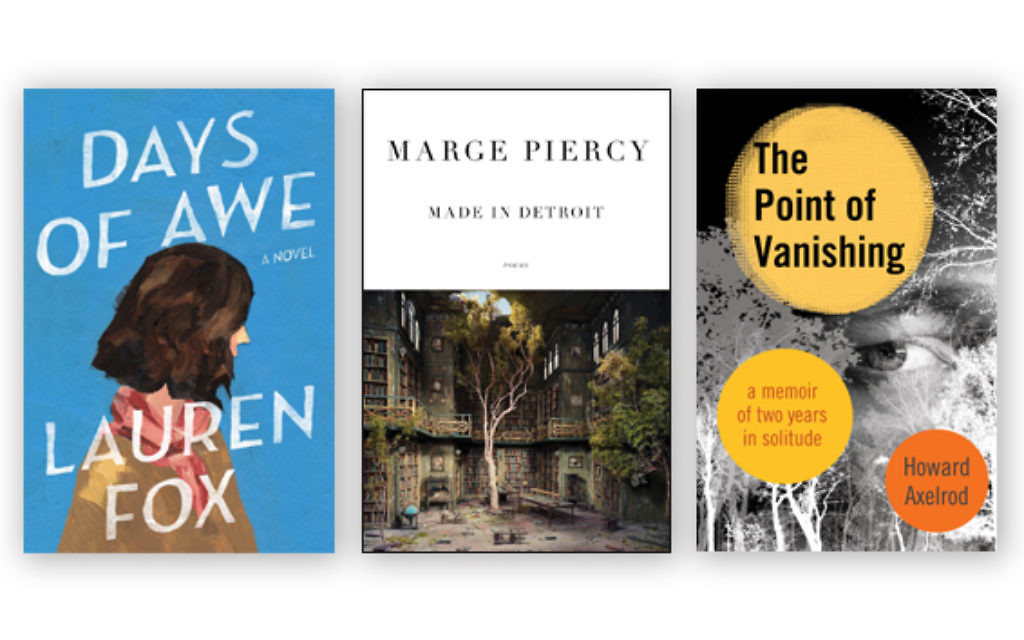 These are books unlikely to be on the same shelf, let alone the same bookcase, or in the same home. Some are titles that invoke the spirit of the holidays, whether playfully or subtly or seriously; some are appropriate for these days of introspection in suggesting new ways of seeing.

In reading Lauren Fox’s smart and funny novel, “Days of Awe” (Knopf), it takes some a while — several chapters, moving back and forward in time — to pick up the High Holiday connection. It’s a story first of grief, as Isabel tells of the death of her 42-year-old best friend and fellow teacher Josie, who died after her car skidded off an icy road and crashed into a guard rail. As the novel opens, Iz, as Isabel is known, arrives at the funeral with her husband Chris and their 10-year-old daughter Hannah.

Isabel had introduced Josie to her husband Mark, her good friend since kindergarten, when Mark Abrams and Isabel Appelbaum found themselves seated next to each other, “two little alphabetized Jews, dark haired and slightly lost in a forest of midwestern consonant clusters.” “Happy Yom Kippur,” they would say to each other as a private joke, repeating the greeting that the non-Jews in Milwaukee offered to them since they were kids.

In the first year after Josie’s death, Isabel’s marriage falls apart, her once-adoring young daughter becomes a difficult almost-teen, she grows distant from Mark and begins to learn more about her late best friend. Her mother, Helene, is one constant, a Holocaust survivor who lost all of her family. Helene signs up her daughter for a Relationships in Transition group and then accompanies her there, later inviting a male group member to dinner (along with Isabel, to the latter’s surprise).

Indeed, these are days of introspection, reflection, forgiveness and a bit of repentance for Isabel, as she looks back at the relationships in her life and recalibrates. The book’s structure moves along much the way memories take shape. Isabel, with her deep humility and irreverent humor, is a very appealing narrator, someone the reader would like to linger with, as she begins a new cycle.

During his junior year at Harvard, at a pick-up basketball game, Howard Axelrod gets hurt and loses the vision in his right eye. After finishing college and fellowships, he still hasn’t regained his depth perception, nor is he able to balance his inner and outer lives. He spends two years alone, in a cabin in the backwoods of northern Vermont, learning to see again, and to feel. His first book is an engrossing and deeply affecting memoir, “The Point of Vanishing” (Beacon Press). Alongside Axelrod, the reader also learns to see differently, both in looking and listening to the everyday, and in looking ahead to the future, to better days. With a sense of urgency and a poetic sensibility, he writes about being in nature, searching for meaning and purpose, learning about love and connection. While he speaks several times of being Jewish, he doesn’t turn to prayer, but his meditative passages, his deep noticing of life, feels prayerful.

With its overview of the sacred times, places and ideas of Judaism, Rabbi Marc Angel’s new book, “The Rhythms of Jewish Living: A Sephardic Approach to Jewish Spirituality” (Jewish Lights) is a useful guide to Judaism, for people of both Ashkenazi and Sephardi backgrounds.

The title of “Lord, Get Me High!” by Rabbi Elchanan Shoff (Kodesh Press) is drawn from a song by Rabbi Shlomo Carlebach. In this brief book, Rabbi Shoff explores the layers of meaning in the 27th Psalm, which is recited daily through the holiday season, from the beginning of the month of Elul through Sukkot.

Poet Marge Piercy recently published a new volume of her work, “Made in Detroit” (Knopf), with poems detailing her childhood in Detroit, her present life on Cape Cod, her celebration of Jewish holidays and more. Several poems relate to Rosh Hashanah and Yom Kippur. In “Erev New Years,” she writes, “My year opens its bronze doors/and I pass through into whatever/the Book holds and whatever/I make or unmake or pass by./I walk into this new beginning/of a self under construction.”