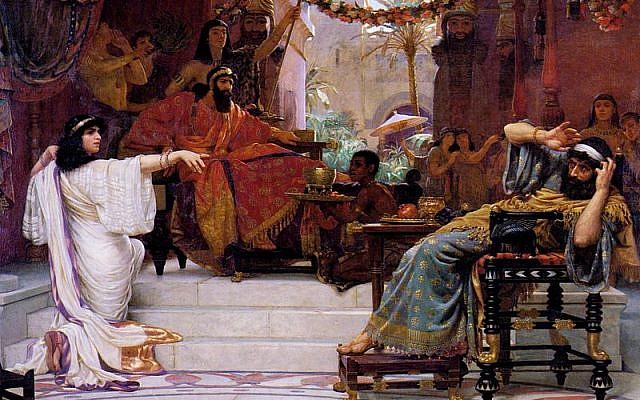 Two stories. Two different time periods. One states, “…every man should wield authority in his own home.” If other women feel empowered to assert themselves, “there will be no end of scorn and provocation!”  The other, “You have inspired and given courage to women to come forward…” From the fourth century to the 21st, women are still being suppressed. March is Women’s History Month, a tie to look at all women have accomplished in the past and recognize what still needs to be done in order to achieve complete equality.

Purim is right around the corner and in Megillat Esther, Queen Vashti refuses the king’s request for her to show off her beauty at his party. Afraid this would inspire other women to defy male authority, the king banishes her. I remember learning about the story of Purim, and thinking, “there is finally a female character I can relate to!” However, Vashti was seen as an evil character. At the time, I thought nothing of this, but now, I am infuriated. Vashti was a hero. She stood up for herself, even though she knew it was risky.

Today, we should be teaching students, especially young girls, how to be like Vashti, a woman who was not afraid to speak her mind. There are plenty of women today who have been treated as objects and still get ostracized, like Vashti. Think about the #MeToo Movement. After Dr. Christine Blasey Ford accused Brett Kavanaugh of sexual assault, she endured many personal attacks and threats. Although Kavanaugh is now a Supreme Court Justice, Ford did not lose her fight. She found her own voice and inspired women in similar situations to speak out.

The Purim story does not end with Vashti being thrown out of the kingdom—that is just the beginning. The story continues with Esther being chosen, from a beauty pageant, to be the new queen. As a kid, I was elated that there was not just one female character, but two in one story. Like Blasey Ford, Esther was initially scared to talk to the king. Esther knew that anyone who approached the king without being summoned would be killed. However, Mordechai convinced her to do so, and, in the end, she saved the lives of the Jewish people. She is a true hero.

In the 21st century, there are also many women who embody Queen Esther. Someone who stands in my mind is Michelle Obama. Like Esther, Obama was able to use her position in government to make her voice heard. She was able to work on issues that were important to her, like children’s health, and make impactful changes. Esther and Michelle Obama show women that while it may be scary to make your voice heard, there is positivity that can come out of taking that risk.

In the end, whether it is the fourth or the 21st century, women are strong leaders who need to be heard. Women’s History Month is a perfect time to teach young girls that being powerful and assertive is cool, saying “no” is perfectly okay and speaking out is extremely important. Let us all channel our inner Vashti and Esther.

Liora Reiken is a senior at White Plains High School. She is a Staff Writer for Fresh Ink for Teens.

Fresh Ink for Teens is an online magazine written by, and for, Jewish students from high schools around the world