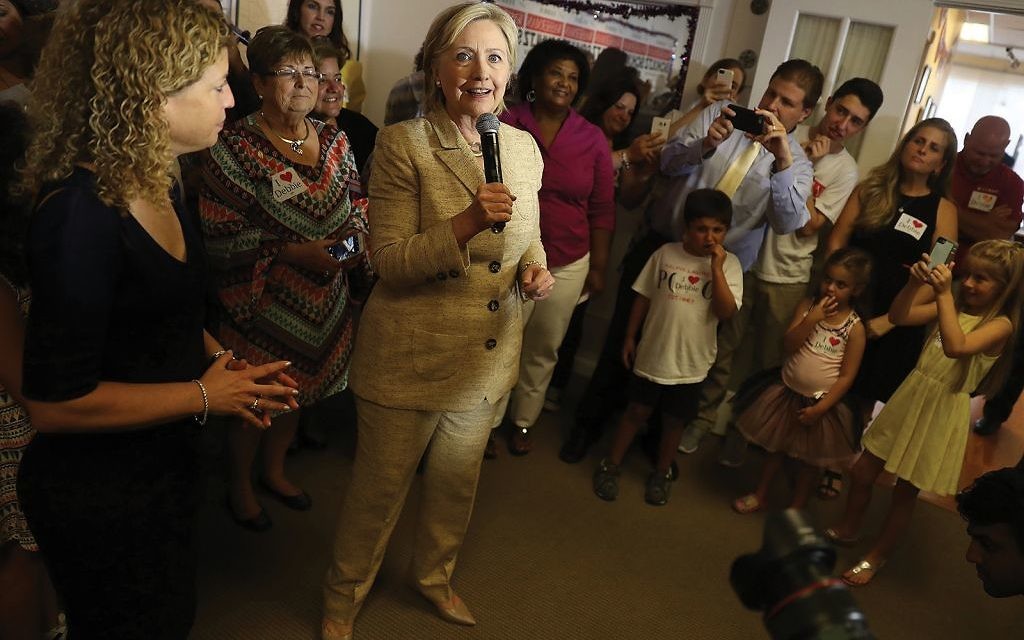 “There is no big call for change” among Florida’s Jews, Gerstein said, which is consistent with their overwhelming support for Clinton, whose campaign is largely focused on continuing the policies of President Barack Obama.

Florida is seen as a key battleground state that could help decide the election, and it’s difficult to know whether the views of Jews there reflect those in the rest of the country. However, the percentage of Florida Jews backing Clinton is close to the percentage of Jewish votes nationwide that Obama received in 2012 against Mitt Romney.

Independent voters swinging to Trump are said to be responsible for the recent tightening of the race nationally.

Gerstein said Trump’s unfavorable rating among Florida’s Jews is an “abysmal” 71 percent and that it “will be difficult for him to get traction when people have this view of him and the Republican Party as a whole, which has a 19 percent favorable and 67 percent unfavorable rating.”

The one bright spot for Trump came from the 6 percent of Florida Jews who identified as Orthodox – 66 percent of them said they support Trump.

“Mr. Trump’s campaign notoriously posted an anti-Semitic image — a Star of David imposed over a sea of dollar bills — that first appeared on white supremacist websites, along with attacking the same groups that white supremacists often target,” she said. “The community knows that his dangerous rhetoric and actions are compelling reasons for why Donald Trump is simply temperamentally unfit to be president of the United States.”

In fact, she added, Trump’s embrace of those with racist views is the “top issue” for Florida’s Jews.

Gerstein noted that the strong Jewish opposition to Trump’s call for a temporary Muslim ban is “a very large statement from Jews in Florida.” Nationally, he noted, 59 percent of Americans oppose the ban and 35 percent support it.

Bard said she was in Florida when Trump announced his campaign’s new chief executive officer, Stephen Bannon. He is the former executive chairman of the online news site Breitbart, which has become the voice of groups that subscribe to the so-called alt-right.

“By his decision to hire him, Trump has embraced and taken on” this most extreme movement, she said.

In her speech in Reno, Nev., Clinton said: “From the start, Donald Trump has built his campaign on prejudice and paranoia. He’s taking hate groups mainstream and helping a radical fringe take over the Republican Party. His disregard for the values that make our country great is profoundly dangerous.”

Clinton then cited as evidence Trump’s retweets of white supremacists and anti-Semites and his failure to decisively denounce David Duke, a former grand wizard of the Ku Klux Klan.

Duke himself began making robocalls for Trump in the last few days, telling voters in Louisiana to vote for him for the U.S. Senate and for Trump for president. The Trump campaign swiftly condemned the calls and claims that Trump is promoting hate, saying: “There is no place for this in the Republican Party or our country.”

Polls released in recent days paint a national electorate that is rethinking the post-convention pop she received, in part because of newly released Clinton e-mails. Trump said they show ties between the Clinton Foundation and Clinton’s State Department, in violation of an agreement she signed before becoming secretary of state.

An NBC News/Survey Monkey tracking poll released Tuesday shows Clinton with a 6-point lead nationally — 48 percent to 42 percent for Trump in a head-to-head contest. With the two minor party candidates in the race, Clinton’s lead shrunk to 4 percent (41 percent-37 percent), with Libertarian Party candidate Gary Johnson at 11 percent and the Green Party’s Jill Stein at 5 percent.

In recent days Trump has also sought to soften his image. He has expressed remorse for hurting anyone with his speech during the campaign, and he told Fox News that he was open to “softening” his position on deporting illegal immigrants.

“There could certainly be a softening because we’re not looking to hurt people,” Trump said in advance of this week’s speech, in which he promised to detail his immigration plan.

But a Clinton spokeswoman, Zara Rahim, dismissed such Trump comments.

“Secretary Clinton made clear it is the same Donald Trump — what you see is what you get,” she told The Jewish Week. “We are not going to let him make broad-brush implications that backtrack [on previous statements]. And he has not rescinded … his plan to stop Muslims from entering this country.”

Jews in the Florida poll cited the economy as their prime issue, and Bard said Clinton is “really focused on an economy that works for everybody. … Her record is well known in the Jewish community; Trump changes his policy day-to-day.”

She added that Jews are also “responding to values, which speaks to me as a rabbi’s daughter. She is saying we are stronger when we lift each other up, and that is such a fundamental Jewish value.”

And Bard noted that the Jewish outreach effort is also going strong in two other key battleground states with a sizeable Jewish population: Ohio and Pennsylvania.

A Trump spokeswoman did not reply to an e-mail asking if the Trump campaign had a Jewish outreach effort.

“We are not taking anything for granted,” Bard said. “We are working with large Jewish communities wherever they are – including New York.”

But CNN reported that although there are still more registered Democrats in Florida, North Carolina and Pennsylvania — three battleground states — Clinton’s advantage there has been cut by a massive Republican voter registration drive.

The Florida poll found that the anti-Clinton and anti-Trump campaign messages are resonating most with Jews supporting Clinton. Only 37 percent said Trump’s charges that Clinton is a liar have raised doubts in their mind about her. Charges that she is not for change, is a career politician and is not supportive of Israel resonated with no more than 40 percent of Jewish voters.

On the other hand, Clinton’s attacks on Trump’s views of women, his temperament, “women with abortion language,” his formulation of policies, ability to be commander-in-chief, anti-Semitism, “threat to Jews” and his “racist” beliefs all raised concerns with more than 70 percent of Florida’s Jewish voters.

In addition to the economy, the other three top issues for Jews are the Islamic State (ISIS), the Supreme Court and health care. Gerstein said that Israel is a concern to Jews, but that because both Clinton and Trump are supportive of Israel, Jews “turn to other issues to vote on.”

Gerstein said the poll found also that Jews were locked into their candidates and that nothing — not even the upcoming debates — are likely to cause them to change their minds.