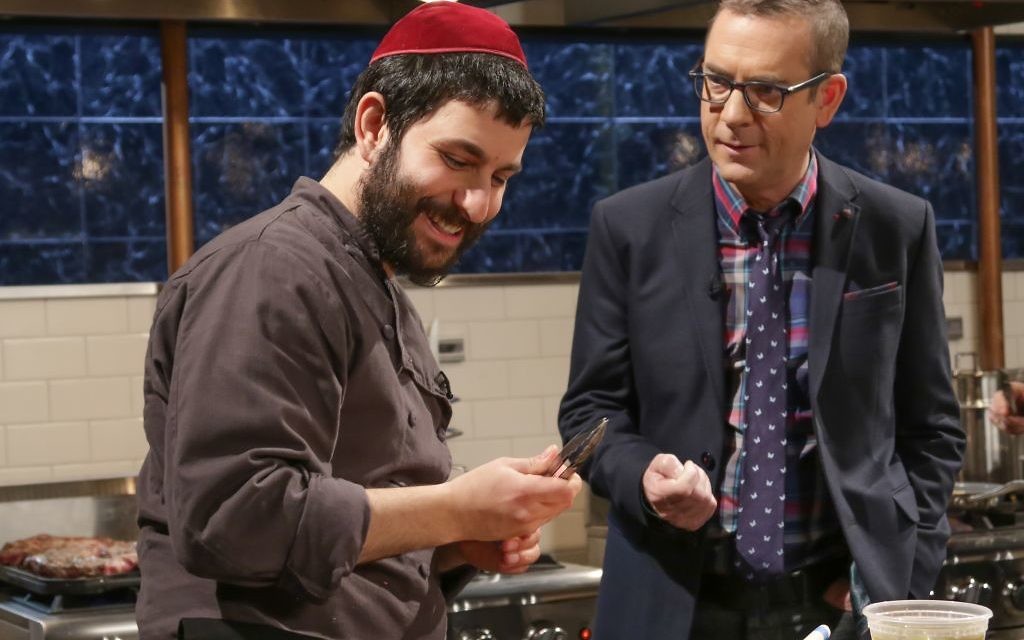 Rabbi Hanoch Hecht, a Chabad emissary from upstate New York, has developed an educational program where he teaches five different Torah learning sessions in 30 minutes. But can he cook a gourmet meal in just a half hour?

The “Six-Minute Rabbi”, who is a Chabad emissary from Rhinebeck, New York will be a contestant on Tuesday’s episode of the Food Network’s Chopped. In the episode, “Leap of Faith,” which will air on June 21st, Rabbi Hecht will face off against a priest, a pastor and a soon-to-be nun.

The popular Food Network show pits four contestants against one another as they cook appetizers, entrees and desserts in a three-rounded tournament. The catch: contestants must use “mystery ingredients” that are not revealed to them until the round starts. After each round, the crew of judges, usually made up of professional chefs, dissect each dish and pick the most inferior dish to “chop” until there is one chef left standing. During Tuesday’s episode, the mystery ingredients include fish (could it be gefilte?) for the appetizer round, fruit and wine for the entrees and figs for dessert.

Rabbi Hecht, who teaches about the Jewish laws of Kashrut at the Culinary Institute of America, was recommended for the role by a professional chef. After intense interviews and months of waiting, he was finally informed that he would be featured on the show.

“I thought my participation would be a fabulous platform for raising awareness about keeping kosher.” the rabbi told Dvora Lakein of Lubavitch.com. “Kosher presents a unique challenge that many other religions don’t face.” The Food Network “was very accommodating,” Rabbi Hecht said. “I was very grateful and touched that they were sensitive to my needs.”

When he is not in the kitchen, Rabbi Hecht teaches Torah — in just six minutes. On every Thursday that means making the long journey into Manhattan from Rhinebeck and riding around the city from lesson to lesson on Citi Bikes. The rabbi likens the session to speed dating, but for Torah. After around eight hours of teaching, he gets back onto Amtrak and heads back to Rhinebeck.

Rabbi Hecht says that his ability to condense his Torah knowledge into six minute learning definitely helped him. “I was able to pack an hour’s worth of cooking into 30 minutes,” said the Brooklyn-born rabbi.

Whether or not “Six-Minute Rabbi” can successfully transform into the 30-minute chef on Tuesday to become the Chopped champion remains to be seen.