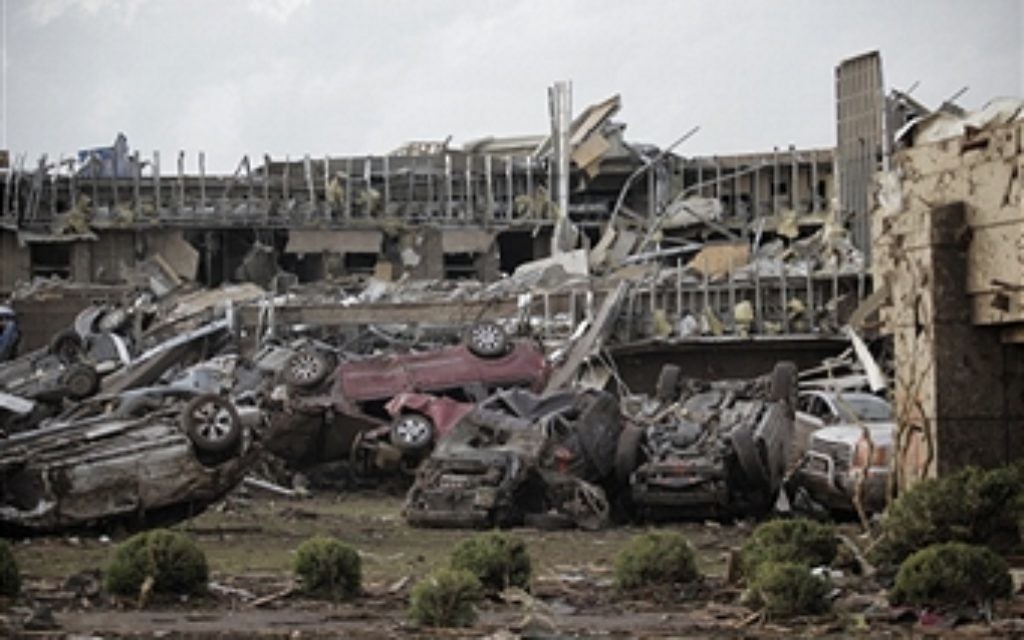 A Chabad center in Oklahoma City opened its building as a shelter for those displaced by a deadly tornado.

The Chabad Community Center of Southern Oklahoma also is collecting supplies for those left homeless by the tornado that tore through an Oklahoma City suburb on Monday afternoon, leaving at least 91 people dead, including at least 20 children, and injuring hundreds.

“While we feel the pain of others, we’re very thankful that we’re able to respond – to use all our energy and all our resources to let the community know we’re here to help,” Rabbi Ovadia Goldman, the Southern Oklahoma Chabad’s co-director, told Chabad.org.

Meanwhile, area rabbis met with leaders of the Jewish Federation of Oklahoma City Tuesday morning to forumulate an organized relief effort, the federation told The Jewish Week. Detais were to be announced later in the day.

The umbrella group Jewish Federations of North America announced its own fund Tuesday. “Our hearts go out to all those who were in the path of this disaster and who are grieving the loss of their loved ones,” said JFNA President and CEO Jerry Silverman. “This was a terrible tragedy. The destruction of an elementary school filled with students and teachers was especially painful.”

In Brooklyn, the executive director of Masbia, a network of kosher soup kitchens in New York City, has began raising money to truck kosher food from the Agri-Star processing plant in Postville, Iowa, to Oklahoma City.

“During [Superstorm] Sandy relief in New York [last fall], Masbia worked with Agri-Star to feed thousands of victims, we hope to be able to the same in Oklahoma with your help, Alexander Rapaport said in a fundraising email.

Masbia hopes to raise $3,000 for the first refrigerated truckload of food. (Donate here.)

Rabbi Goldman of Chabad said he has received calls from individuals and organizations in New York, Ohio, Iowa, Illinois, California and abroad with offers to help with relief efforts.

Israeli Prime Minister Benjamin Netanyahu sent a letter of condolence to President Barack Obama on Tuesday morning in the wake of the tornado.

“On behalf of the Government and people of Israel, I offer our heartfelt condolences to you and to the people of the United States on the massive tornado that struck in Oklahoma and exacted such a horrific toll in human life,” Netanyahu wrote. “Our thoughts and prayers are with the victims of this tragedy and their families at this difficult time.”

This YouTube video posted by Charles Cook captures the tornado increasing intensity on May 20 as it turned into a category F4 stoem in Newcastle, OK.