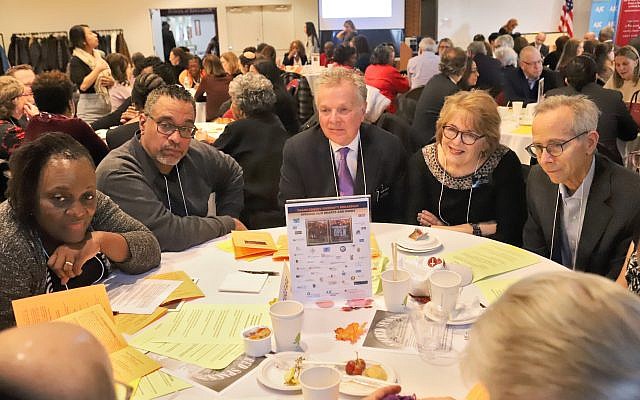 The warm greetings, hugs and embraces that were exchanged before the start of the annual American Jewish Committee Westchester/Fairfield County’s Thanksgiving Diversity Breakfast at Manhattanville College in Purchase couldn’t entirely banish the underlying chill in the air that had little to do with the bleak November weather.

In the wake of the Tree of Life synagogue shooting in Pittsburgh, the increase in anti-Semitic incidents around the country, and the seemingly endless litany of racist-inspired shootings, the 400 attendees at the Nov. 15 breakfast were only too well aware that their gathering had particular urgency this year.

“The Thanksgiving Diversity Breakfast was created in response to hate after 9/11 and has always been this region’s constructive response to hate,” said Scott Richman, regional director for the AJC for Fairfield/Westchester, in an email. “We build bridges and celebrate diversity in the face of those who espouse a very different point of view and in order to sow the seeds for a brighter future.”

He added: “The future will be one that we as Jews have been working at for thousands of years, It will be a future where we of course treasure our own particularism and identity, but it will also be one that reaches out universally, to celebrate the traditions of others and to build a world based on mutual respect, on civil rights and on human rights. The recent hate crimes, especially the massacre at the Tree of Life Synagogue in Pittsburgh, shows us that hate still needs to be combatted, but AJC’s #ShowUpForShabbat campaign and this Thanksgiving Diversity Breakfast show us that good people everywhere will respond to that hate with love and with a reaffirmation of the values that we hold so dear.”

Those honored at the event — the Rev. Dr. Franklyn Richardson, senior pastor of Mt. Vernon’s Grace Baptist Church; the Sisterhood of Salaam Shalom of Westchester and Fairfield Counties, as well as the Rev. Dr. William Crawford, former pastor of Larchmont Avenue Presbyterian Church and Rabbi Jeffrey Sirkman of Larchmont Temple, who host the long-running cable show, “Faith and Eggs” — acknowledged that their interfaith efforts represented a powerful antidote to the current climate plagued by explicit expressions of anti-Semitism and racism.

“This is a very hopeful experience in the midst of all the hate in our time,” said the Rev. Dr. Richardson. “This is an inspiring and pregnant opportunity to grow closer together.”

That message, of reaching out and connecting to others who are different, resonated throughout the morning.
“We have been called by God to create dialogue among people of different faiths,” said the keynote speaker, the Rev. Dr. Suzan Johnson Cook, who had served as the United States ambassador for International Religious Freedom during the Obama administration. “We need to find that common ground. We’re bridge builders, with a vision of what we can be as a diverse nation.”

During the break-out sessions, when participants were asked to address questions on the theme of “Opening Our Hearts and Minds,” Dobbs Ferry’s Vicki Greif, a member of Sisterhood of Salaam Shalom, realized she didn’t know where there was a local mosque and needed to remedy that gap in her knowledge.

Similarly, Vivien Salmon, a member of Grace Baptist Church, spoke about getting past the “silos” in which she worked and lived. “We need to reach out and hold hands,” she said. “When we go into our communities, we need to look at how do we bring diversity in?” adding that the room at Manhattanville College — with tables filled with people of many faiths and ethnicities — was what “success looks like.”

Rabbi Sirkman said, “In the wake of Squirrel Hill, Charleston and Charlottesville, don’t wait for the diversity breakfast to make that connection.” He urged those in attendance to reach out to neighbors who didn’t necessarily share their political views, or, practice the same faith.