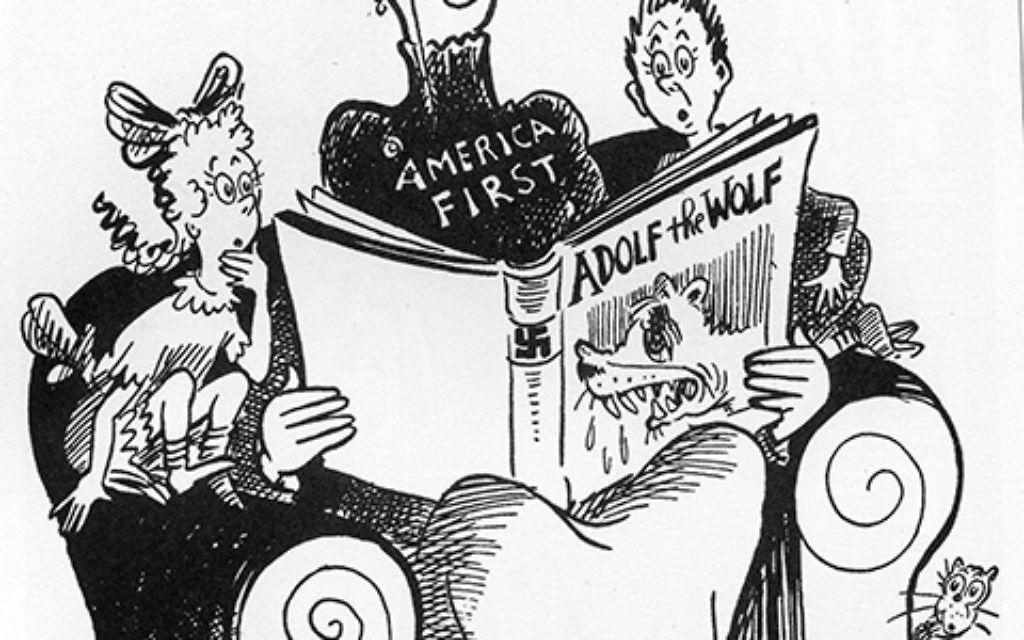 In a rare coincidence of the calendar, Holocaust Memorial Day and National Cartoonists Day fell out on the same day this year, May 5. Although it might at first glance seem as if they are two completely unrelated occasions, cartoons and genocide actually intersect in unexpected ways.

The ability of cartoons to inspire hatred and violence continues to be debated by historians and sociologists, but there can be no doubt that cartoon imagery played an important role in the anti-Jewish propaganda sponsored by the Hitler regime. The main Nazi propaganda vehicle, the weekly Der Stürmer, constantly published vicious cartoon illustrations of Jews resembling snakes, insects, and especially as sexual defilers of German “Aryan” women. In its pages, a serpent with a Jewish face would menace a young blonde girl, or a Jewish doctor would be depicted preparing to pounce on an unsuspecting Christian female patient.

A recent cartoon in a popular Spanish magazine was somewhat reminiscent of those Nazi images. The cartoon by Julian Serrano, which appeared in the Barcelona-based magazine El Jueves, portrayed Israeli soldiers — with stereotypical large noses — physically abusing Jesus. One soldier was shown urinating on Palestinian Arabs while declaring, “You don’t understand, Palestinian, my grandparents were in a concentration camp.”

Meanwhile, a recent cartoon in the Palestinian Authority’s official newspaper, Al-Hayat Al-Jadida, likewise employed unusually harsh anti-Israel imagery. It portrayed a Palestinian child being chopped up in a giant meat grinder. The blood spurting from the grinder formed the words “Made in Israel.”

Not to be outdone in the business of using cartoons to foment hatred, the Iranian government is organizing another “Holocaust Cartoons Contest.” The $50,000 prize will be awarded to the cartoonist who can create the most vicious mockery of the Holocaust, Israel, or Jews in general. Previous such contests attracted many hundreds of submissions from around the world, some of which were put on public display by the Tehran regime.

Here in the U.S., all free speech, even that which stings, is protected by law. And the whole point of political cartooning is to sting — to make readers think about an issue even at the price of offending some of those readers. The idea of prohibiting cartoons that are insulting to a particular group runs counter to the rights enshrined in the Constitution.

Still, looking at some of the hateful cartoons that are circulating these days, it’s sad to see how estranged such cartoonists are from the cartoonists of yesteryear who are featured in the new book, “Cartoonists Against the Holocaust.”

In the 1930s and 1940s, a number of American editorial cartoonists used their cartooning skills to raise the alarm about the dangers of Nazi Germany and to alert the American public about the mass murder of Europe’s Jews.

Pulitzer Prize-winner Edmund Duffy, whose cartoons decrying the lynching of African-Americans sparked riots outside the offices of The Baltimore Sun, also drew powerful cartoons about the plight of Jews fleeing Hitler.

Eric Godal, himself a refugee from Nazi Germany, drew editorial cartoons for U.S. newspapers about Jews persecuted by the Nazis — even as his own mother and 929 other German Jewish refugees aboard the ship St. Louis were turned away from America’s shores.

Young Theodore Geisel, in the years before he became the beloved author of children’s books as “Dr. Seuss,” created unforgettable anti-Nazi cartoons for the New York City newspaper PM. One, in 1940, offered a particularly stinging rebuttal to the anti-foreigner sentiments of that era. He drew a mother reading a bedtime story to two children. The mother is labeled “America First,” a reference to the largest isolationist, reactionary — and sometimes anti-Semitic — movement of the time. The book is titled “Adolf the Wolf” (with an appropriate cover illustration), and has the children listen with evident trepidation, the mother reads: “And the wolf chewed up the children and spit out their bones … But those were Foreign Children and it really didn’t matter.”

There are, of course, more than a few people today who look with similar disdain upon “foreign children.” But there are also editorial cartoonists who are using the power of their pens to counter such sentiments. That is the natural and healthy tension that characterizes a free society.

Rafael Medoff, a Holocaust scholar, and Craig Yoe, a cartoon historian, are co-authors of “Cartoonists Against the Holocaust” (Clizia).