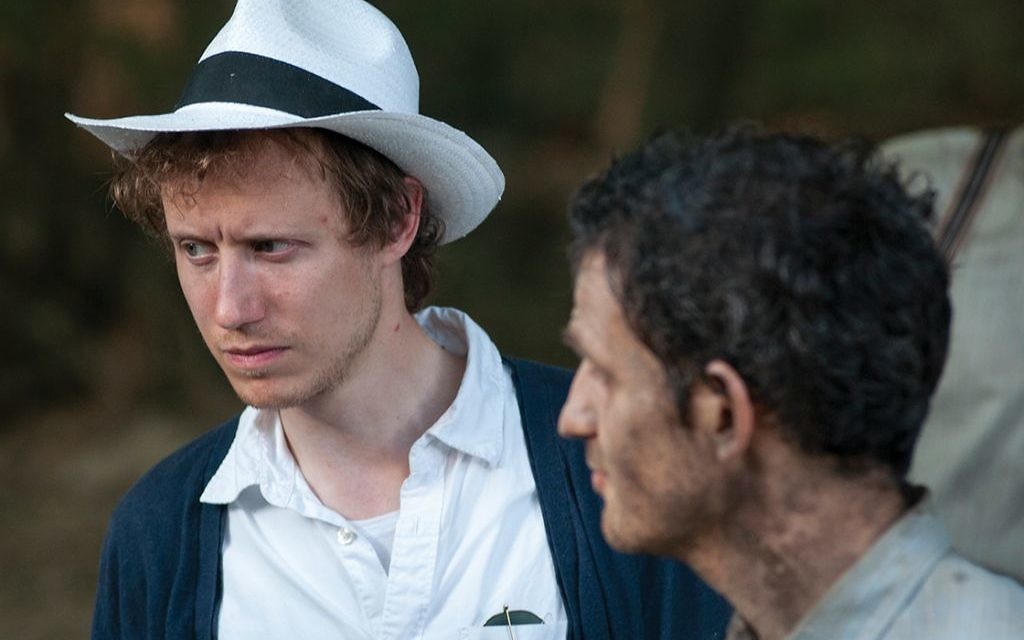 László Nemes knew that when it came time to make his first feature film he wouldn’t have trouble finding a subject.

The Holocaust, in his native Hungary.

“It’s a pretty defining event for me,” said the director of “Son of Saul,” the controversial and intense new film about Auschwitz that opens Dec. 18. “I’ve been carrying that destruction in my genes,” he adds with a grimace.

His star, Geza Röhrig, has a similar set of damaged chromosomes in his personal history.

“If you add in the aunts and cousins, the number of family we lost in the Shoah is well into double digits,” he said. The two were interviewed when the film played the New York Film Festival here in October.

Both men are Jews by birth and upbringing, writers and creators by trade and temperament, at once detached and yet possessed of a flame-like intensity.

A fiction film based on the writings of members of the Auschwitz Sonderkommando, “Son of Saul” is set in the very heart of the killing machinery. The Sonderkommando were predominantly Jewish prisoners selected by the camp personnel to do the actual dirty work of the death camps, helping herd the victims from the trains to the gas chambers, sorting through the belongings of the dead, cleaning the blood and excrement from the killing rooms, filling the crematoria with bodies and then disposing of the ashes. In exchange, they were briefly given better food and sleeping arrangements than the other prisoners, but every few months the entire group would be killed and replaced. They were, after all, among the very few witnesses to the murders being methodically committed in the death camps.

Apparently some critics were upset by the focus on the Sonderkommando, who they considered tacit accomplices in the murders. However, as even a cursory glance at Anglo-American criminal law or the Nuremberg trial records would tell them, someone acting under duress is not an accomplice but a victim. Some also felt that the film’s singular focus on one Sonderkommando denied the viewer a wider context on the Holocaust.

Nemes’ explanation for the film’s focus, drawn largely from the writings of Sonderkommando members who didn’t survive, is straightforward.

“I didn’t want to make a film with a distant, detached point of view,” he says. “I wanted to place the audience in the shoes of one person in the middle of the killing machine. Otherwise the Holocaust becomes an abstract concept and the audience can back away.”

But at the same time, the film eschews the easy torture-porn images, obscuring them with smoke or focusing his camera on the faces of the men doing their terrible work.

In October 1944 the Sonderkommandos in Auschwitz organized a short-lived, violent rebellion. They dynamited one of the crematoria, fought the SS with smuggled and improvised weapons. Around this time, they also managed to take a handful of photos of the gas chambers and the victims, the only visual documentation extant.

“Son of Saul” is set during the 48 hours surrounding these events. From its opening shot of Saul Ausländer (Röhrig) working in the ordinary turmoil of a shift at the gas chambers, we are only occasionally aware of the larger picture. Rather, Nemes literally focuses our attention on Saul, almost always in close-up, his heavy brow often obscuring his penetrating, dark eyes, an impassive observer so inured to the nightmare around him that he seems utterly dehumanized. Nemes uses long takes and a perpetually moving camera combined with very shallow focus, with the result that we are only vaguely aware of the ghastly sights around Saul, as dimly aware as he seems to be.

He is truly an Ausländer, an outsider, a stranger, even to his own feelings. The constant motion serves to numb Saul (and the audience) to the (sur)reality around him. His strangeness is rendered all the more acute when he becomes convinced that one of the young victims of the day’s murderous proceedings is his own son. When Saul decides to give the child a traditional Jewish burial, his path begins to diverge from that of his fellow prisoners.

The background/foreground tension is at the very heart of the film’s sulfurous dialectic of mass murder, and Nemes worked hard to visualize it. Between the long takes and the restlessly wandering, probing camera that alternately follows and leads Saul, the film required a daunting level of preplanning, juxtaposed with a certain improvisational flair.

“We did plan everything visually,” Nemes says.

Nemes continues, “We had to know the work process in the background. We had to know all the details. I had on a tablet [computer] an overhead grid indicating all the camera positions. We would add the main action into the background, but the background [came] first. It was a mixture of chaos and organization.”

The result is a film that is relentless in its intensity and focus, yet densely layered thematically, visually and, most of all, aurally. Working closely with sound designer Tamás Zányi, Nemes has constructed a film whose soundtrack is as important as its images. Devoid of background music but constructed with great care, the sound of “Son of Saul” is as exceedkingly intuitive as the visuals were exceedkingly mapped out.

“It was very organic,” Nemes says. “We understood that we would use a lot of sound without identifiable sources, [things like the constant sound of] the machinery of the crematoria. It’s like a living beast. But at some point in the process we started taking stuff out. We needed an instinctive understanding of the sound of the film.”

One element of the visual track that sets the film apart from virtually all recent films about the Shoah is its palette. The film does have a muted palette, but his choice of natural color pays powerful dividends towards the end of the film when events take us outside the camp into a birch-tree forest whose greenery seems almost liberatingly vivid.

By way of explanation Röhrig, who has a yeshiva background, talks about the rabbinic dialectic that juxtaposes the Law and the World.

“There is no green in the Torah,” he says. “But by 1944 there’s no Law, no Torah and all you have left is the green. Only the world remains.”

Despite the dark forces in power in contemporary Hungarian politics, the film was successful in its native land.

“People are taking about the film and making it the focus,” Nemes says with obvious satisfaction. “It’s in the conversations in a country that still hasn’t come to terms with this part of its history.”

Unfortunately, the interview with Nemes and Röhrig took place before the announcement of plans to erect a statue in Szekesfehervar of the notorious anti-Semite Balint Homan. Their comments on the state of Europe today, however, make their point-of-view clear.

“European civilization is falling into little pieces,” he says. “The fact that a strong Jewish civilization was destroyed in Europe less than a hundred years ago is linked to the fact that Europe has no future. Hungary is a desolate country. In 1910 Budapest was a vibrant, multicultural city, but now it’s a city – and a country – in ruins. But Hungarians don’t understand that.”

Röhrig adds somberly, “We have to retell this story — l’dor va-dor — in whatever way it takes. It’s still a part of our reality.”