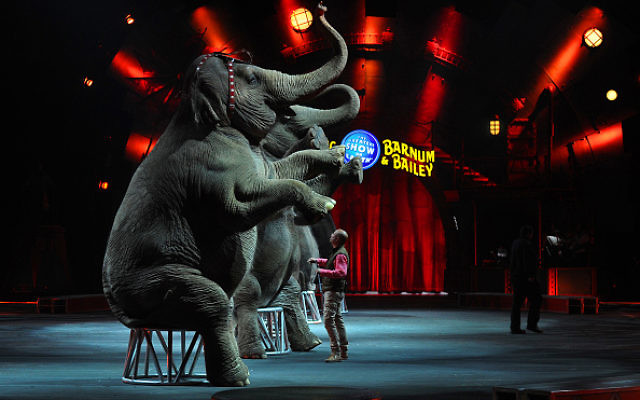 Ryan Henning, an elephant handler, trainer and Deputy Animal Supervisor for Ringling Bros. with the elephants as they performed their last show at the Mohegan Sun Arena in Wilkes-Barre, Pa. The elephant show had it's last show this day and the animals were trucked to Florida as they were retired. -- We followed the Ringling Bros. and Barnum & Bailey circus as they discontinue the elephant act as part of their shows. The Elephants will live in retirement in Florida. Getty Images

As a kid, Matt Loory always loved both the circus and Purim.

Now that he’s a grown-up — just barely, at 23 years old — and in charge of feeding a Ringling Bros. and Barnum & Bailey’s circus, he’ll have to sacrifice shul for the show.

When Purim starts, Loory will be at work, presiding over an operation that churns out between 1,000 and 1,500 meals a week for the 300-plus circus performers and crew on the “Legends” show that just played the Barclays Center and will be in Newark over the holiday.

He’s a proud Jew who taught Sunday school at two synagogues in the Orlando-area community where he grew up; ate — and made — Shabbat dinner with his family and did a high school semester in Israel. The circus wasn’t a religion for his family, but they did make a point of going at least as often as some folks attend synagogue. Loory was in the audience every year from ages 3 to 22.

“At the circus, everyone is dressed up,” he said. “It’s a giant spectacle. We’re not battling for people’s right to live, like the Purim story. But I’d like to think that we bring joy to people’s lives, like the Megillah and the simcha. Every day on the circus is a simcha.”

Of course, as a historical phenomenon and a staple of popular culture, the circus enjoys a certain glamour. The modern-day version has its roots in ancient Chinese acrobatics and medieval market fairs, and Americans have long consumed stories of life behind the scenes.

About 10 years after Loory’s employer — then called P.T. Barnum’s Grand Traveling Museum, Menagerie, Caravan and Circus — made its debut in 1870, the children’s version of Harper’s Magazine serialized “Toby Tyler: Or Ten Weeks With the Circus,” a novel about a runaway boy that became a classic and a Disney film.

But today, as in ancient China, putting on such a massive show is a lot of hard work, Loory says.

He runs two locations: “Pie Car Jr.,” essentially a food truck that travels with the show to provide cast and crew with sustenance at the venues, and the 110-foot-long “Pie Car Sr.,” where he and his five-person staff do most of their bulk cooking in addition to selling food 24 hours a day when the circus train is moving from show to show. Workweeks for staff can amount to 60 hours; for Loory himself, 17-hour days are not uncommon.

He does his work on an actual train — it looks like an Amtrak vehicle, except for the huge “Greatest Show on Earth” signs on the side — that’s more than a mile long. All show workers get their food from the Pie Cars, unless they’re playing a city like New York, where restaurants are worth paying more for.

The circus subsidizes Pie Car food, providing a dinner of a protein, starch, vegetable and a drink every night for between $5 and $10, Loory said.

“We all share this city without a zip code,” Loory said.

He’s been manager on the “Legends” show for a year and got that job just two months after he joined the crew, when his predecessor resigned for health reasons.

“This came as a surprise to everyone,” Loory said; indeed, spokeswoman Marni Raitt says he’s one of the youngest Pie Car managers in Ringling Bros. history.

Loory was always interested in food, and remembers standing on a stepstool and rolling matzah balls for soup from a young age. His family business is in television. His grandfather was a vice-president with CNN; his mother does freelance graphics and his father just closed his postproduction business. Loory likes the rush of doing live TV and considered going to college and then pursuing a career in it. But he decided it wasn’t for him.

“I didn’t want an office job, to be stuck behind a cubicle,” he said. “I didn’t want to wear a suit. Some of my friends are consultants or working in marketing. But I think that I have the coolest job out of all of them.”

A graduate of a Le Cordon Bleu — the venerable French cooking school has locations all over the world, including Orlando — Loory found out about the Ringling Bros. job by opening an e-mail from the school’s career services department. He had a job at a First Watch restaurant, one of a national chain of cafés focused on breakfast food, and was due for a promotion there, so he usually ignored the listings, but his love of the circus compelled him to apply.

“The beauty of this is, I’m seeing the entire country so I can figure out where I want to get off,” he said. “When the time comes, and I’m ready to do something else, I can just get off at Moline, Ill., or Austin, Texas.”

Ultimately, Loory dreams, like most cooking school graduates, of opening his own restaurant. Fifteen years ago, he worked out the concept with a friend: a kosher-style place that’s deli by day, and offers a rotating menu of traditional Jewish holiday dishes at night.

But for now, and for the next three to five years, he’s happy where he is; he never expected this or, for that matter, any job in his future to enable him to do the kind of fancy cooking he learned in school.

“I call this refined multicultural industrial cooking,” he said. “That’s the unfortunate part of working on a circus. We’re not boiling potatoes to mash them; we’re using mashed potatoes. We don’t cut corners, but we have to do things quicker.”

There’s eight Jews on the train — “not quite a minyan,” or prayer quorum, as Loory puts it — and they’re just one minority among many, since the cast and crew come from as least 20 different countries and speak about 10 languages, including Hungarian, Portuguese, Russian and Chinese.

Since taking the manager job, Loory has made it his mission to add to the Pie Cars’ offerings, which now include accommodations for special dietary needs like gluten intolerance and cuisines from the train’s various cultures.

Loory tries to use his food to enhance the circus community, said Emily Ritter, the show’s events coordinator. He asks his customers for recipes, and their favorite foods, and even launched an initiative in which the children on the train (they attend a traveling school and daycare) compile facts about different countries that Loory then posts on a board outside Pie Car Sr. On Saturdays, he hangs a flag from that country and makes its traditional foods, Ritter said.

All of these differences make it easy for Loory and the other Jews on the train to keep their faith, too.

“Pretty much everybody else who is Jewish actually works in the show, so they couldn’t come with us, but we could escape, and at least get there,” he said. “It’s difficult to do Shabbos services when there’s three shows going on. We do what we can.”