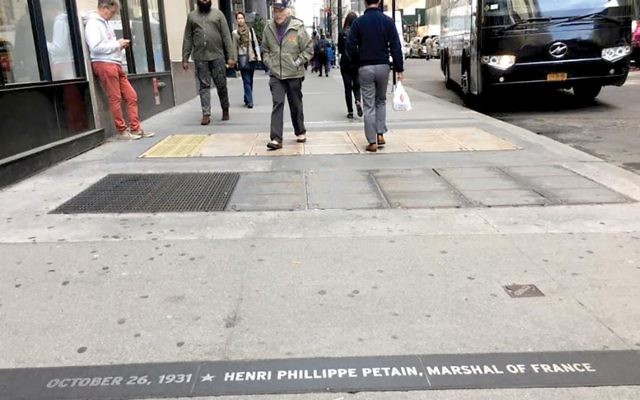 The plaque honoring Philippe Petain, WWI hero and Nazi collaborator, in the Canyon of Heroes has garnered criticism.

New Orleans is removing Confederate monuments from its boulevards, Amherst College was forced to drop its “Lord Jeff” mascot (Lord Jeffery Amherst supported giving Native Americans smallpox-laced blankets to eradicate them) and public schools are barring their sports teams from continuing to use the Redskins name.

Now, State Assemblyman Dov Hikind and the World Jewish Congress are taking aim at Canyon of Heroes plaques honoring Henri Philippe Petain and Pierre Laval, two Frenchmen tied to the Vichy government who were honored by the city with ticker-tape parades four days apart in October 1931. The Canyon of Heroes, a stretch of 13 blocks in the Financial District, contains 205 plaques marking all of the ticker-tape parades here since 1886.

When he was honored, Laval was the premier of France. Petain was heralded as a hero of World War I. But both gained ignominy nine years later for their collaboration with the Nazis.

Petain was the premier of France’s Vichy government when he ordered the arrest and deportation of 77,000 Jews to Auschwitz; Leval served as his deputy head of state and foreign minister. In 1942, Laval began stripping French Jews of their rights and helped the Nazis capture and deport non-French Jews. He publicly proclaimed his support for Germany, saying: “An American victory would mean victory for the Jews and the communists.”

Both men were tried for treason after the war and sentenced to death. Laval was executed but Petain’s sentence was commuted to life in prison, where he died in 1951.

Hikind pointed out that Petain was a “collaborator who went further than the Nazis in terms of the racial laws in France and the deportation of Jews from his country. If you ask most people who he was, most don’t know, but now that people have been made aware of this, it should be a no-brainer to remove it.”

Hikind said the Jerusalem Post brought the Petain plaque to his attention last Thursday and that he wrote to Mayor Bill de Blasio the next day asking that he have it removed.

“It has come to my attention that New York City has inadvertently honored a mass murderer,” Hikind wrote. “Following the discovery of this marker in a recent article in The Jerusalem Post, I have been inundated with calls from not only my constituents but people all over New York City who are outraged — as I am — over Petain’s inclusion in the august collection of markers.”

When The Jewish Week informed Hikind on Tuesday that there was also a plaque for Laval, Hikind said: “They call this the Canyon of Heroes. … Let’s just get rid of them. The French understand who these people were. They are not honoring them, why are we?” 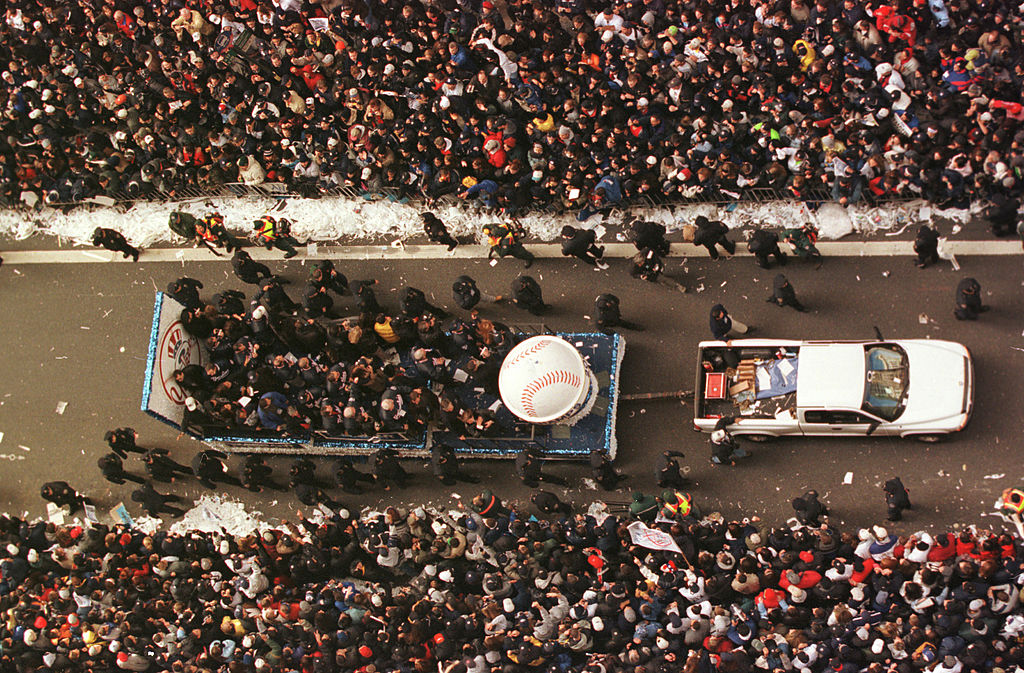 He was referring to the fact that all of the streets and municipalities in France that had been named for the men have been changed.

Hikind said he has spoken by phone with de Blasio but that “nothing is resolved.” De Blasio’s press office did not respond to an email request for a comment. The French Consulate here said in a statement: “The French authorities were not aware of the affixing of the plaque commemorating a parade in which Phillippe Pétain took part. France has denounced the complicit actions of the Vichy regime with the criminal doings of the Nazi regime.”

In France, all of the roads and streets bearing the name of Marshall Pétain were systematically renamed.

Betty Ehrenberg, executive director of the World Jewish Congress of North America, said this is a “teaching moment for our community” and urged that the plaques be removed.

“Heroes are examples to our children, and we should remain true to upholding only those who are worthy of the hero designation.”