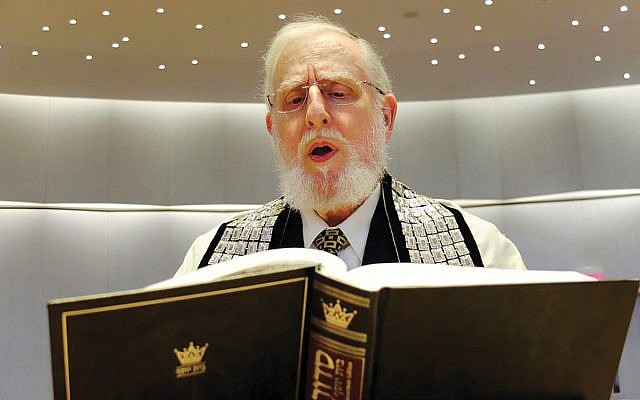 Cantor Goffin was remembered this week by Lincoln Square’s rabbi, Shaul Robinson, as “the glue that held our synagogue together.”

Cantor Sherwood Goffin, whose mastery of Jewish liturgy took him from the bima of Manhattan’s Lincoln Square Synagogue to guest performances as “chazzan-in-residence” at congregations around the world, and from Soviet Jewry rallies to classrooms at Yeshiva University, died April 3 at 77.

A native of New Haven, Conn., Cantor Goffin was the founding chazzan — he was popularly known as “the Chaz,” an appellation he wore on his kipa — in 1964 of Lincoln Square Synagogue, a Modern Orthodox congregation he served for a half-century. In recent years he took on “senior” status, chanting at the occasional service and passing the cantorial torch to Yanky Lemmer, who took part in the funeral service last week that filled the synagogue’s sanctuary.

Rabbi Shlomo Riskin, the founding spiritual leader of Lincoln Square Synagogue who flew to New York on a moment’s notice from his home in Israel to deliver a eulogy at the funeral, said, “I knew with all my heart that I could not do the job without him” when he decided to found an outreach-oriented congregation. The two had met as classmates at Yeshiva University, and took part in YU Torah Leadership seminar weekends. “I warmed up the crowd with the guitar, then he talked Torah,” Cantor Goffin recalled years later.

Rabbi Shaul Robinson, who has led Lincoln Square since 2005, eulogized Cantor Goffin as a man who “radiated unconditional love” and was “the glue that held our synagogue together” as rabbis came and went.

Rabbi Ephraim Buchwald, citing a Hebrew poem by Hayim Nachman Bialik at the cantor’s funeral, said Cantor Goffin “died before his time …. There was another song in him.”

“In his presence,” Rabbi Buchwald said, “you knew you were with a man with a special soul.”

A graduate of the Mesivta Torah Vodaath high school in Brooklyn, he studied psychology at Yeshiva University, and received his cantorial degree from Yeshiva University’s Belz School of Jewish Music, where he later taught.

Cantor Goffin sang in his hometown synagogue’s choir from the age of 8.

A recognized authority in nusach, the strict traditional modality of Jewish prayer, he released several albums that featured his interpretation of Jewish prayers and music.

The cantor, who served as honorary president of the Cantorial Council of America, recorded several albums of chazanut (cantorial music), and folk music, including one in 1970 dedicated to Soviet Jewish refuseniks. He performed at Carnegie Hall and Lincoln Center, and sang at every NCSY National Convention from 1962 to 1991and many OU conventions.

Glenn Richter, one of the founders of the Soviet Jewry movement, called Cantor Goffin “the musical voice of the movement.”

The cantor, in a conversation a few years ago with Olivestone, said, “My part in the Soviet Jewry movement, my involvement in NCSY and in the YU Seminars, my teaching at the Belz School and, of course, my role at Lincoln Square Synagogue” ranked as his career’s highlights.

The cantor is survived by his wife Batya, three children and several grandchildren.

During his career, he tutored, by his count, more than 400 bar mitzvah students and sang at hundreds of weddings.

“And, I officiated at many, too many, funerals here, too,” he said in remarks six years ago at Lincoln Square Synagogue’s old building, from which it moved to its new $50 million location a hundred yards south on Amsterdam Avenue. “Thank God, the simchas have far outweighed everything else!”