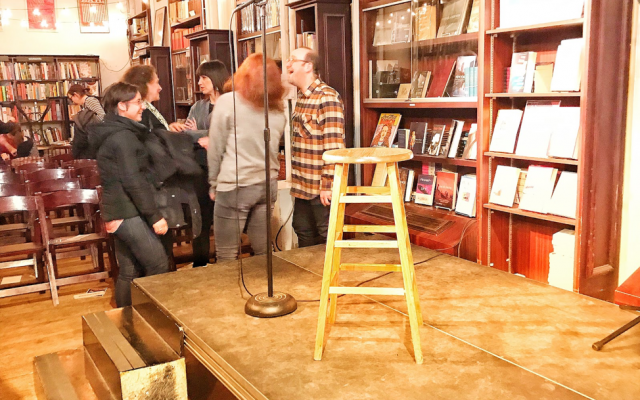 Ophira Eisenberg, Josh Gondelman and others share a laugh behind the Housing Works stage. Photos courtesy of Julie Levey

“You’re welcome,” said Rabbi Scott Perlo of the 92nd Street Y, addressing five of New York City’s best Jewish comedians and the audience that came to see them. On behalf of 5779 years of history, he was taking credit for why Jews produce “grade-A comedy.” “Jews,” he asserted, “confront powerlessness and need some way to rise above. Making people laugh is a way to take power back.” 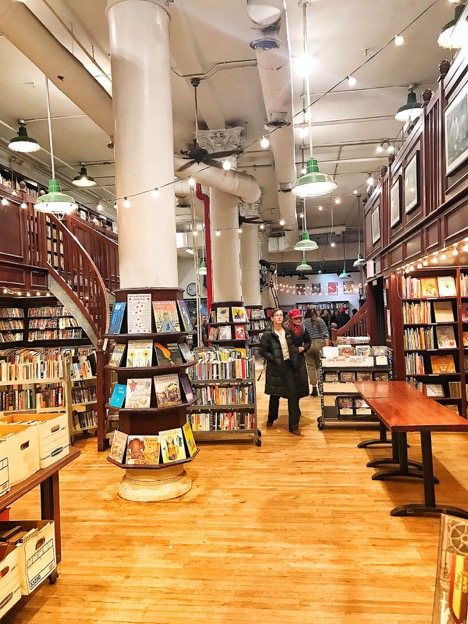 Proceeds from sales at the Housing Works Bookstore help to end the dual crises of homelessness and AIDS.

On Tuesday, March 19, more than 150 New Yorkers—the overwhelming majority of them young Jewish women—packed the Housing Works Bookstore Cafe to start the Purim festivities a day early, as comedian Josh Gondelman joked, “beating the traffic.” They had all come for an event advertised as “From Esther, to Haman: A Roast of Cancelled Men.”

Esther is often hailed as the “shero” of Purim. She advocated for the Jewish people and stood up to King Ahasuerus, and her perseverance and risk-taking are admirable. But many recognize Vashti as another “shero” of the story (because who’s to say we can’t have more than one shero?). Vashti told King Ahasuerus that no, she would not go show off her beauty for all his inebriated male friends; she refused to be objectified in such a way. Vashti’s story loudly echoes the narrative we are hearing today: the countless women who have stepped forward to condemn men who have taken advantage of, molested, raped and sexually harassed women.

If Vashti lived in 2019, she would be saying: “#MeToo.” Vashti’s refusal resulted in her being banished and forced to relinquish her position as the queen. In the wake of the #MeToo Movement, we are beginning to see the tides turn. As more and more women stand up together to fight against those that have abused them, more and more men are “banished,” or “cancelled,” from our society.

Gondelman was the night’s “Haman,” both hosting the event and serving as an outlet for the anger women wished to express towards all the men who had wronged them. He graciously gave the crowd permission to “boo” him whenever he stepped on stage. “After all,” he said, “as a Jewish comedian, it is what I expect, and I deserve.” The four female comedians (NOT to be referred to as comediennes, female stand-up comics, or (worst of all) “humorous uteruses,” as Ophira Eisenberg insisted), Jess Salomon, Alison Leiby, Eisenberg and Emmy Blotnick, took the stage one by one to “cancel” all the men who had wronged them or others in the community. The list included already-cancelled men such as several of Eisenberg’s former NPR colleagues, as well as men on JDate, men who clog the aisles at Sephora on Saturday afternoons, ex-boyfriends, adult men who like comic books and this guy: the man at a bagel shop who ordered a blueberry bagel with strawberry cream cheese. “JUST GET A MUFFIN!” Blotnick cried in desperation. 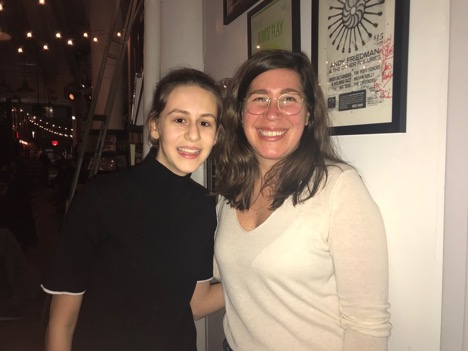 The author (Julie Levey) with comedian Alison Leiby, who currently writes for “The Marvelous Mrs. Maisel”

The night, as Rabbi Perlo predicted, included no shortage of grade-A jokes. Salomon looked at #MeToo through the most Jewish of all lenses: asking if it’s good for the Jews. “Harvey Weinstein?” she said, “Is he Jewish?” And Leiby discussed the fact that there are no Jewish Disney princesses. “The closest is Belle. She’s a brunette, everyone in Europe hated her, and she had to settle for a very hairy man.”

With the #MeToo Movement and the prevalence of anti-Semitism, this event was an appropriate way to “celebrate hating” as Eisenberg said. “I mean, what’s more Jewish than holding a grudge for years?” asked Blotnick. Jewish people use humor as a survival mechanism to cope with unimaginable hatred and horrors. And it’s not just the Jews. The same applies for women, and for every other group of people that has experienced marginalization. We can march, we can chant, we can write and we can protest, but we still need to laugh. Otherwise, we run the risk of losing sight of what makes us human and what enables us to bond with and relate to each other. When people commiserate and share common hardships, they connect through humor and hope. Laughter is a way to express that but also to express fear and despair. It’s no wonder people laugh so hard they cry.

The “Roast of Cancelled Men” was what the New York Jewish community needed to lift spirits before the start of the festival of Purim. But who doesn’t need a laugh every day? After all, you can bet that once she packed her bags, Queen Vashti had a good ol’ laugh thinking about the look on King Ahasuerus’s face when she said no to his inappropriate request. It’s a look we don’t have to try too hard to imagine, for too many of us have seen it too many times. Let’s cancel it.

Julie Levey is a junior at The Spence School in N.Y. She is a member of Fresh Ink for Teens’ Editorial Board.