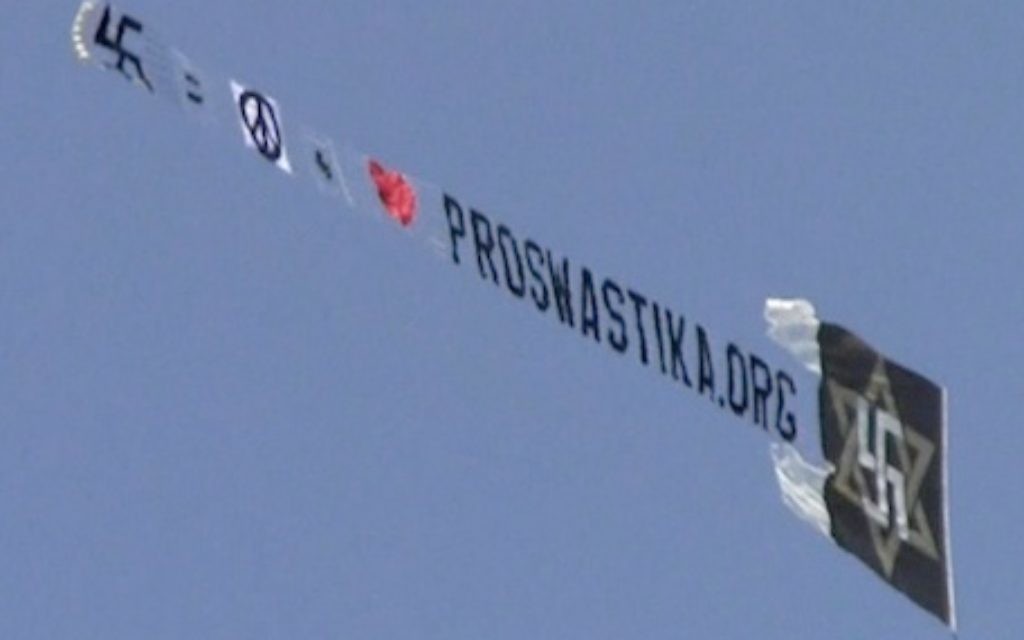 What do you do if you see someone wearing a swastika?

Do you confront the offender? Inquire why the person is displaying the hated sign of the regime that perpetrated the Holocaust? Educate? Walk away?

The decision is harder if the person in question obviously means no harm and is apparently oblivious to the Swastika’s emotional impact on Jews, if not on anyone who grew up in the era of World War II or has some historical consciousness.

I faced this dilemma a few weeks ago.

Stepping out of an elevator in a mid-town apartment building, I walked past a middle-aged woman with a lapel pin adorned with a swastika. She was apparently from Asia, most likely Southeast Asia, where the symbol is an important part of culture. The Swastika – the crosses hooked in the opposite direction from the well-known, hated symbol co-opted by Hitler – is an ancient, venerated part of the Hindu, Buddhist and Jainist faiths, and of some Native American groups. It’s also a Chinese character that represents eternity. On East Asian maps, it indicates a Buddhist temple.

The word comes from the Sanskrit “svastika,” which means ‘to be good.’

Occasional news stories surface of an Eastern Asian merchant somewhere selling some wares that feature the Swastika, or of a Jew being taken aback upon encountering Swastikas on a visit to some site in India or another land in the region.

Last week the swastika again made the new, closer to home. This time, the perpetrators knew the symbol’s past, and current significance. A small plane towed a Swastika banner over New York City and the Jersey shore over the weekend; it was an attempt to rehabilitate the swastika.

The international Raelian movement, a group that believes that humans were created by extraterrestrials eons ago and that the Swastika represents infinity in time, made a public display of the symbol part of its third annual Swastika Rehabilitation Day.

The swastika, “the oldest and most recurrent symbol in the world,” was corrupted by the Nazis, the movement’s website explained. “Any negative emotions regarding the swastika by people under the age of 70 years old are obviously linked to their education and not to their experiences.”

A “misguided, but not malicious act,” said Etzion Neuer, acting head of the Anti-Defamation League in New Jersey. “Incredibly insensitive … an egocentric attitude.”

The ADL, incidentally, recently declared that the swastika “will no longer be automatically considered an act of anti-Semitism” – it’s graduated to a universal sign of hatred or prejudice.

Unless you’re from some parts of Asia.

From whence, I assume, came the lady whose path I crossed here.

I froze for a second when I spotted the Swastika on her lapel. Was this an unrepentant neo-Nazi inviting a confrontation? Then I looked at her face. She clearly was no neo-Nazi. She was innocent, apparently unaware of the emotional baggage a swastika carries. Maybe she has no Jewish friends, maybe no one told her that her taste in jewelry, if not politically incorrect in this country, is questionable.

In Germany and Austria and Poland and Hungary and Lithuania , countries that suffered under Nazism, a swastika is illegal. Here, it’s merely offensive. To me, the son of a refugee from Nazi Germany, the grandson of a man who died in a Nazi death camp, a swastika was a slap in the face.

The moment passed quickly. The woman stepped on the elevator and the door closed behind me. She never saw me shudder.

Should I have said something? Should I have remarked that “some people might take offense at the broach?” Was it my responsibility to acknowledge her swastika, to prevent other people in New York from a similar near-confrontation or to prevent the woman from embarrassing herself in the presence of someone more violence-prone than I?

Maybe the purpose of me seeing the swastika was to inspire me to think rather than act.