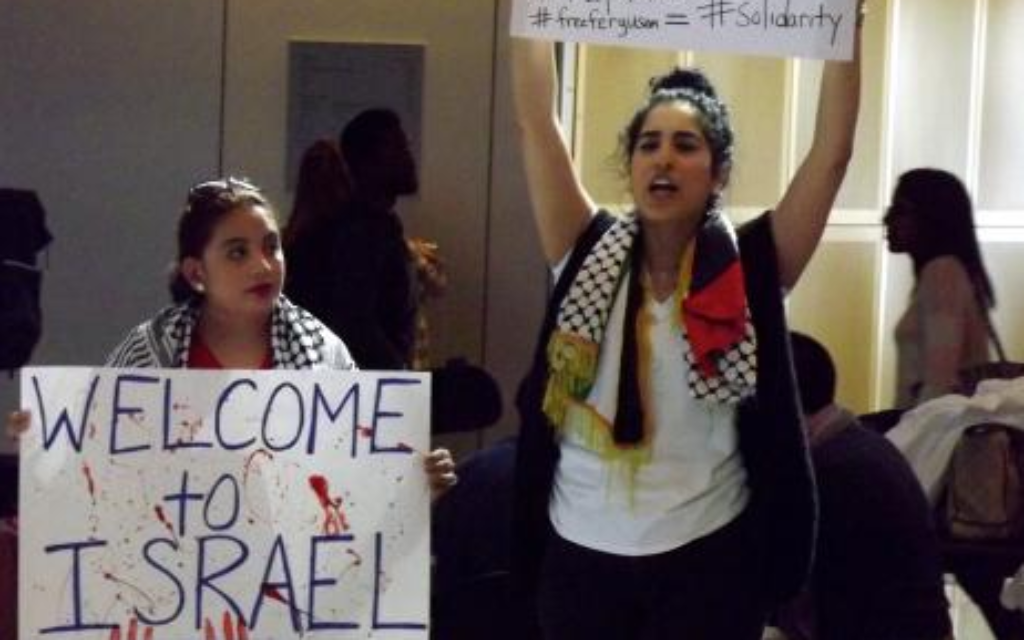 When Students for Justice in Palestine held a “die-in” at John Jay College in 2014 in which they lay beneath red painted sheets to represent Palestinians killed by Israelis, the school’s Hillel president standing nearby holding an Israeli flag was told by a demonstrator that it was “stained with blood.”

A nearly six-month investigation by outside counsel of that incident and a string of other alleged anti-Semitic incidents on the campuses of the City University of New York has verified the veracity of many of the incidents. However, the report concluded that much of the offensive speech is protected by the First Amendment.

“Die-ins, mock checkpoints, and the SJP banner may offend some, but the First Amendment does not permit a public university to take action against them,” the report said. “Political speech is often provocative and challenging, but that is why it is vital to university life. If college students are not exposed to views with which they may disagree, their college has short-changed them.”

Tomer Kornfeld, now a senior at John Jay College and the Hillel president who had been holding the Israeli flag at the “die-in,” told The Jewish Week that he “supports the findings” and believes if the university “uses it as a blueprint for what should be done in the future, it will be much better on campus.”

Until now, he said, the university waited until “pro-Israel students” complained about being targeted by other students before condemning such behavior. And he said this report should put all students on notice that “everything they do is being watched, which should make things better on campus.”

Hillel International issued a statement saying the report “highlights a disturbing trend of incidents specifically targeting the Jewish community on campus with anti-Semitic rhetoric and threats of violence. We support the report’s recommendations for CUNY administrators and presidents to condemn anti-Semitic comments and actions and to promptly and forcefully challenge hate speech.”

In the view of Radhika Sainath, however, a staff attorney at Palestine Legal, which seeks to protect the rights of those who advocate for Palestine and which assisted the report’s authors, the findings were a “huge victory for SJP.”

“Independent investigators confirmed what we’ve said all along: that SJP’s speech critical of Israeli policy, including support for BDS, is not anti-Semitic, and is protected by the First Amendment,” she said in an email interview.

CUNY Chancellor James Milliken: Working to “assess the climate on our campuses.” Courtesy of CUNY

“Our hope is that CUNY will live up to its obligations under the First Amendment and allow SJP to express its viewpoint supporting Palestinian freedom,” she added. “This report underscores how false allegations of anti-Semitism, based solely on speech critical of Israeli policies, is being used as a tactic to silence debate on one of the most critical foreign policy issues of our time.”

But Morton Klein, president of the Zionist Organization of America, whose 14-page letter delineating the series of anti-Semitic incidents at the university prompted the outside investigation, said he believes the report should have recommended that the university throw out SJP for violating university rules.

“Rule nine says that any action or situation which recklessly or intentionally endangers mental or physical health is prohibited,” Klein said.

He added that SJP members have “taken egregious anti-Semitic actions whose intent was to intimidate and threaten Jews.”

For example, he said, SJP protestors at a rally at Hunter College chanted “Death to Jews,” “Jews out of CUNY” and “We should drag the Zionists down the street.”

By permitting this kind of talk, Klein argued, “it almost surely will encourage more anti-Semitism at CUNY and on campuses around the country.”

The report’s authors said there was a tendency “to blame SJP for any act of anti-Semitism on any CUNY campus. That is a mistake.”

They said many specific anti-Semitic incidents probed were not committed by SJP members.

Klein noted that a planned joint coexistence and diversity program hosted by Hillel and the Muslim Students Association at John Jay College last November was canceled after members of SJP reportedly warned the Muslim group that if it did not withdraw its sponsorship, SJP would never work with it again.

The report’s authors said that although they could find “no evidence of threats … there is little doubt, however, that MSA received pressure that caused it to withdraw its sponsorship.”

On the other hand, Evan Bernstein, the New York regional director of the Anti-Defamation League, said he believes the report is evidence that CUNY took the concerns of pro-Israel students seriously.

“One of their next steps is to establish the task force on campus climate [the university announced in May],” he said. “We expect it to come up with concrete initiatives that will help foster a campus where people can pursue their education without fear. For us, this report is a great first step, and the next step is the most important – to change the climate on campus.

“We have amazing programs like Campus of Difference and other anti-bias programs. We hope CUNY uses it or other programs. They need to take it as seriously as they did the initial report. The key is now making sure that students on campus are going to feel they are safe and that moderate sounding voices on campus will drown out their [SJP] hate.”

The Campus Climate Working Group chaired by the presidents of LaGuardia Community College and Queens College has already begun meeting, according to CUNY Chancellor James B. Milliken.

In a statement, he said the group is working to “assess the climate on our campuses, consider best practices at CUNY and elsewhere, and make recommendations for how colleges can take steps to ensure that students, faculty and staff are welcome and supported without compromising free speech and academic freedom.”

Milliken added: “We take seriously our commitment to creating an environment that is inclusive, free of discrimination, and respectful of multiple and often conflicting points of view – the bedrock of any university and of a healthy democratic society.”

Marc Stern, general counsel for the American Jewish Committee, said that after reading the 24-page report he found it “hard to argue with their legal conclusion that on current law none of what happened constitutes a violation of law and that the university acted appropriately when called upon.”

“Some of the objectionable things said may be protected,” Stern continued, “but the administration is free to criticize those who break the rules of civility. That is a good recommendation. The fact it is protected speech does not mean it is morally protected and the administration is free to call out rude, divisive and exaggerated manifestations of otherwise legitimate debates.”

In addition, Stern said, there is in the report an “implicit suggestion to the Palestinian and Jewish community that not everything you think is wrong is forbidden, and when you overreact and challenge the SJP, you end up reaffirming their right to speak.”