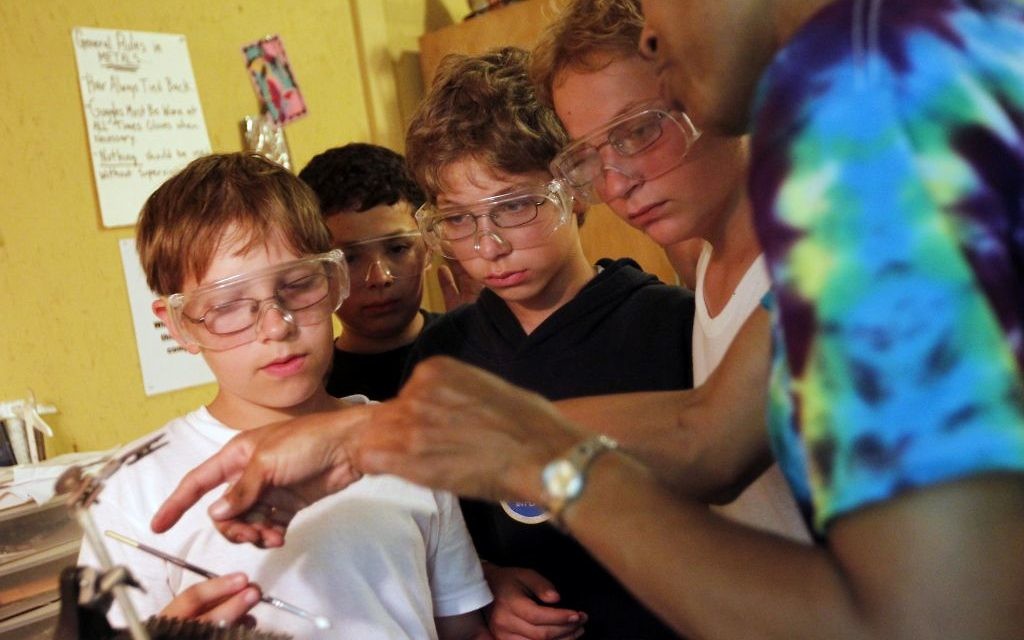 When Josh Steinharter was growing up in mid-’80s Dayton, Ohio, he split his summers between baseball camp and Jewish camp.

In July he would spend a week or two working on hitting and fielding. In August he would engage in “marathon” Shabbat song sessions, swimming and listening to baseball games with his bunkmates on the radio.

Steinharter went on to run the youth sports and summer camp programs at the JCC of San Francisco, and in a few weeks, he will open JCC Maccabi Sports Camp, which combines intensive sports training with the traditional Jewish camp experience that so profoundly affected him.

“When I look back at my summers and I think about the camp experiences I had, my Jewish camp experience is all about my counselors — whom I’m still in touch with today — and my friends whom I still go and visit,” he said.

JCC Maccabi Sports Camp, together with three others opening their doors this summer, is part of a growing specialty camp trend that is picking up steam around the country. Since the first set of specialty camps launched four years ago — an arts camp in Manhattan, an environmental-themed camp in the Poconos, two wilderness camps, one based out of Atlanta, the other in the Rockies, and a sports camp in North Carolina — nearly 3,000 Jewish tweens and teens have enrolled. For more than a third, according to one report, it was their first Jewish camping experience.

“Jewish camp is probably one of the most powerful educational experiences a young person can have” said Sandy Edwards, associate director of the Jim Joseph Foundation, which has put more than $17 million into the creation of Jewish specialty camps in the past six years through a camp incubator project run by the Foundation for Jewish Camp. The foundation is choosing to focus on specialty camps with the hope they will attract a new segment of teens and tweens. “We know a lot of Jewish kids are going to specialty camps but not Jewish ones,” she said.

As the new camps get set to open next month — besides Steinharter’s sports camp, there is one for young entrepreneurs in Boulder, Colo., one focusing on science and technology near Boston and a health and wellness camp in the Poconos — the boutique camping trend has picked up financial backers. Two years ago, the Avi Chai Foundation contributed $1.4 million to the effort.

“The Specialty Camps Incubator has proved to be a successful method for launching new Jewish camps,” said Yossi Prager, the Avi Chai Foundation’s executive director, North America, in a written statement announcing the contribution. “We are thrilled to be a part of this next phase of the program.”

So is Isaac Mamaysky, who was a fifth-year law associate when he and his wife, Lisa Mamaysky, decided to open Camp Zeke, which focuses on healthy living.

“The incubator was this gift — it just fell out of the sky,” he said.

While he wanted his camp to promote exercise and good nutrition (along with yoga and Krav Maga), to him, it was vital that it also provided the sense of community he had at Camp Jori, the Rhode Island Jewish camp he went to as a camper and staff member every summer until his second year of law school.

“To this day my warmest memories and closest friendships were all the result of camp,” he said. “Half of the groomsmen at my wedding were my friends who I met when I was 10 years old at Camp Jori.”

Though Mamaysky, like the other incubator participants, has plenty of summer camp experience, he found the training and mentorship offered by FJC invaluable.

“We would hear from the top minds in camping about every aspect of our camps,” he said. “Every adviser is just a phone call away.”

The Specialty Camp Incubator provides each camp with $1.16 million to cover start-up and operating costs for the first three years, along with three years of intensive training and mentoring, which Edwards said was key to the program’s success.

“This model, of having a staff of people that are really experts support the start-up of a camp,” says Edwards, combined with “providing a community of practice … has become an attractive model in building the field of Jewish education.”

While secular specialty camps in such areas as sports and the arts have been around for decades, this year’s incubator crop offers two camps that are unique both inside and outside the Jewish Camping world.

Greg Kellner, who will open URJ Six Points Sci-Tech Academy in July, says it’s the first camp he knows of that puts as much focus on building community and lifelong friendships as it does on building robots and video games.

Like all the incubator camps, it also incorporates Jewish thought into every aspect of the program: If a group is building a robotic arm for someone with a disability, campers will discuss how the act is “the highest level of the Maimonides tzedakah ladder, helping someone to be self sufficient,” Kellner said. Game designers will consider the ethical implications of video game violence and the environmental science group will learn about the Jewish obligation to guard the earth.

For Val Weisler, an 11th grader in New City, N.Y., it was the focus on entrepreneurship that attracted her notice.

Already a leader in the Conservative Movement’s United Synagogue Youth and a counselor at her local JCC’s day camp, she was well connected to her Jewish peers. She had never thought about going to sleep away camp until she learned about Camp Inc., where campers develop their own business proposals and then pitch them to a panel of real angel investors, “Shark Tank”-style.

A leader in the Conservative Movement's United Synagogue Youth, Weisler also founded The Validation Project, an online volunteering network for teens that has more than 5,000 participants in all 50 states and on every continent, Weisler was thrilled at the idea of going to a camp full of teen leaders.

“The thought of being in the same place for a couple of weeks with people who are like me — today for example, I have a call with you [The Jewish Week] and I have a video chat with Pepsi, but I also got my braces off — it’s literally my definition of heaven.”

Camp Zeke was right for 10-year-old Stratton Stave, of Tuckahoe, N.Y., who cooks so often with his father, that when his mother told him his grandmother has done the cooking for her family ever since she was first married, he said, "Wait a minute, women used to cook?" his mother, Sara, said.

Camp Zeke also turned out to be a perfect match for 11-year-old Ariel Gurland, of West Caldwell, N.J., who has passions for lacrosse, football and making a good stir fry for his family, said his mother, Leslie.