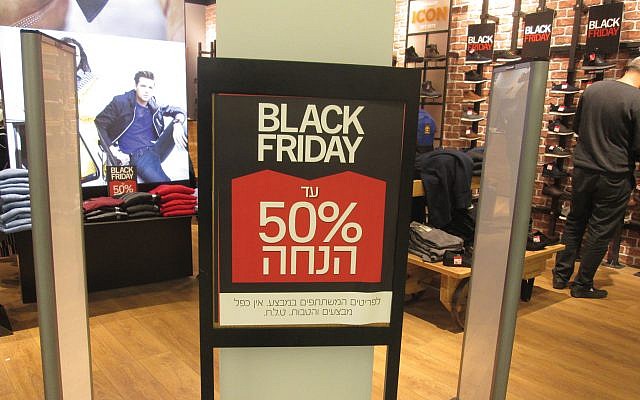 A Black Friday come-on at a Jerusalem mall. Michele Chabin/JW

“I am not into how Israel has become so commercialized. I hate it,” Beryl Rush Tritel, a social worker and therapist, said in a post to an online women entrepreneurs’ group. “I left America for a reason.”

Author Rachel Bell, writing on the same site, agreed, though with a tinge of bitterness.

“It’s problematic in general to become a more consumption-oriented society when salaries are generally not even adequate to minimal needs.”

And for portrait photographer Chani Kay, the Black Friday boom is a complicated tango Israelis — like everyone else in an ever-connected world — must negotiate with the forces of globalism. She doesn’t like the consumer day, “but I get it completely. Israeli businesses are just trying to compete and earn a living in a global market. It’s not simple.”

All last week Israeli malls advertised Black Friday sales with big placards and even bigger sales, and shoppers did not disappoint. 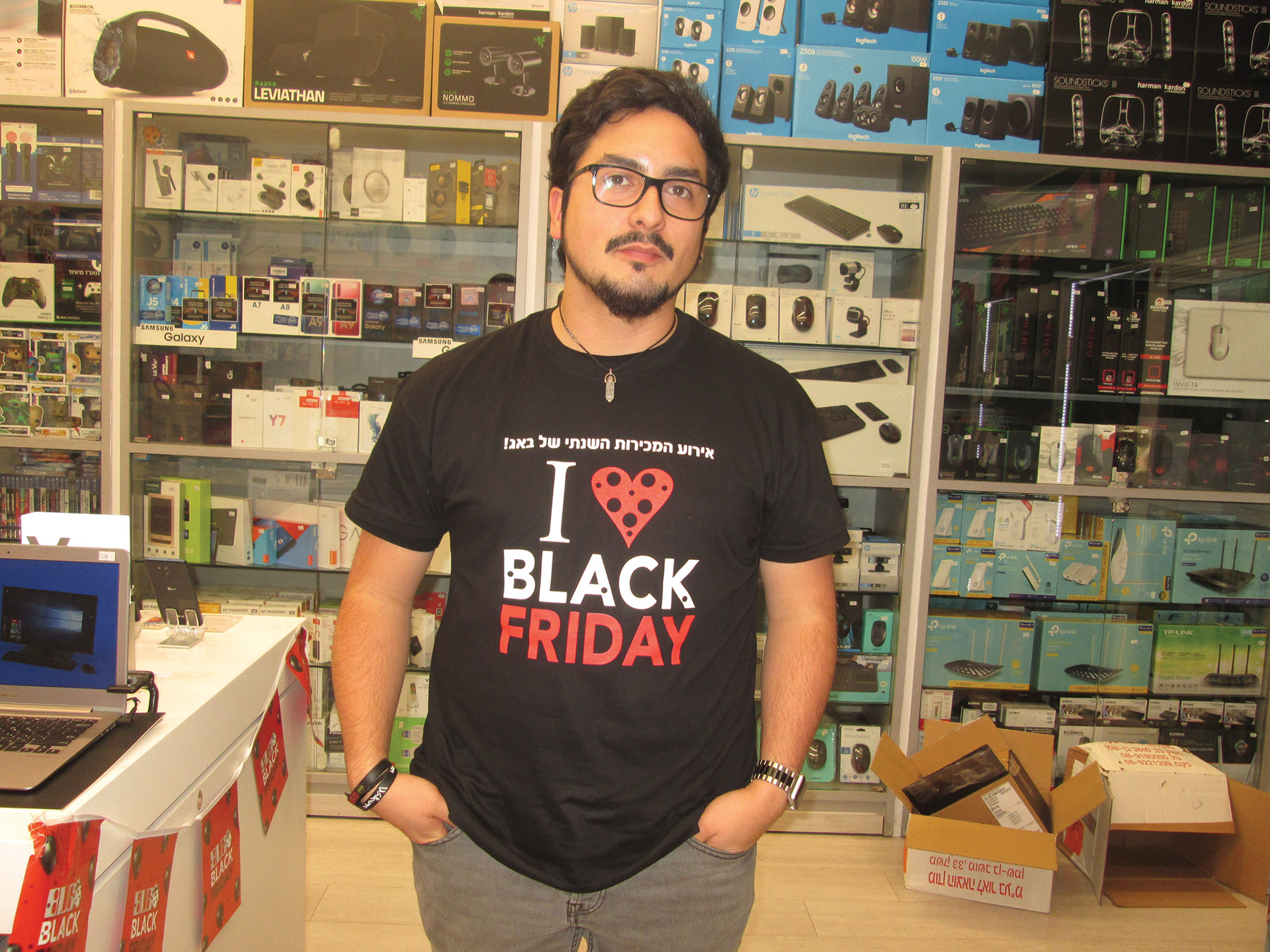 “We offered 300 shekels off on every phone and people really came out to shop,” said Sagi Shalem, manager of the Cellcom kiosk in the Hadar mall in south Jerusalem. “It was Achla,” the Arabic word Israelis use for “great.”

Black Friday – and all the consumerism it implies – has become a huge annual event in Israel, where prices are ordinarily higher than they are in the U.S. and many other countries.

The fact that Shabbat came in around 4 p.m. on Friday didn’t stop consumers from shopping, both in-store and online. During peak hours on Friday, there were about 10,000 credit card transactions per minute, according to the business newspaper Calcalist.

“There was a major slowdown in the credit card system during those peak hours, after the holiday’s ‘exceptional load’ overwhelmed the payment system,” Ynet News reported, quoting Calcalist. “Many businesses reported problems with clearing credit cards during those hours, according to the report.”

Cell phone users (virtually every Israeli child and adult has one) were inundated with Black Friday sale advertisements from local retailers — and even by El Al airlines — to the point where some on social media compared the sales pitches to the pre-election day pleas from their local political candidates.

Although many Americans don’t realize it, Black Friday and CyberMonday have become an international phenomenon – and not always a welcome one.

During his homily on Monday, which was also CyberMonday, Pope Francis called consumerism a “psychiatric illness” and urged people to visit their closet instead of shopping for new things. 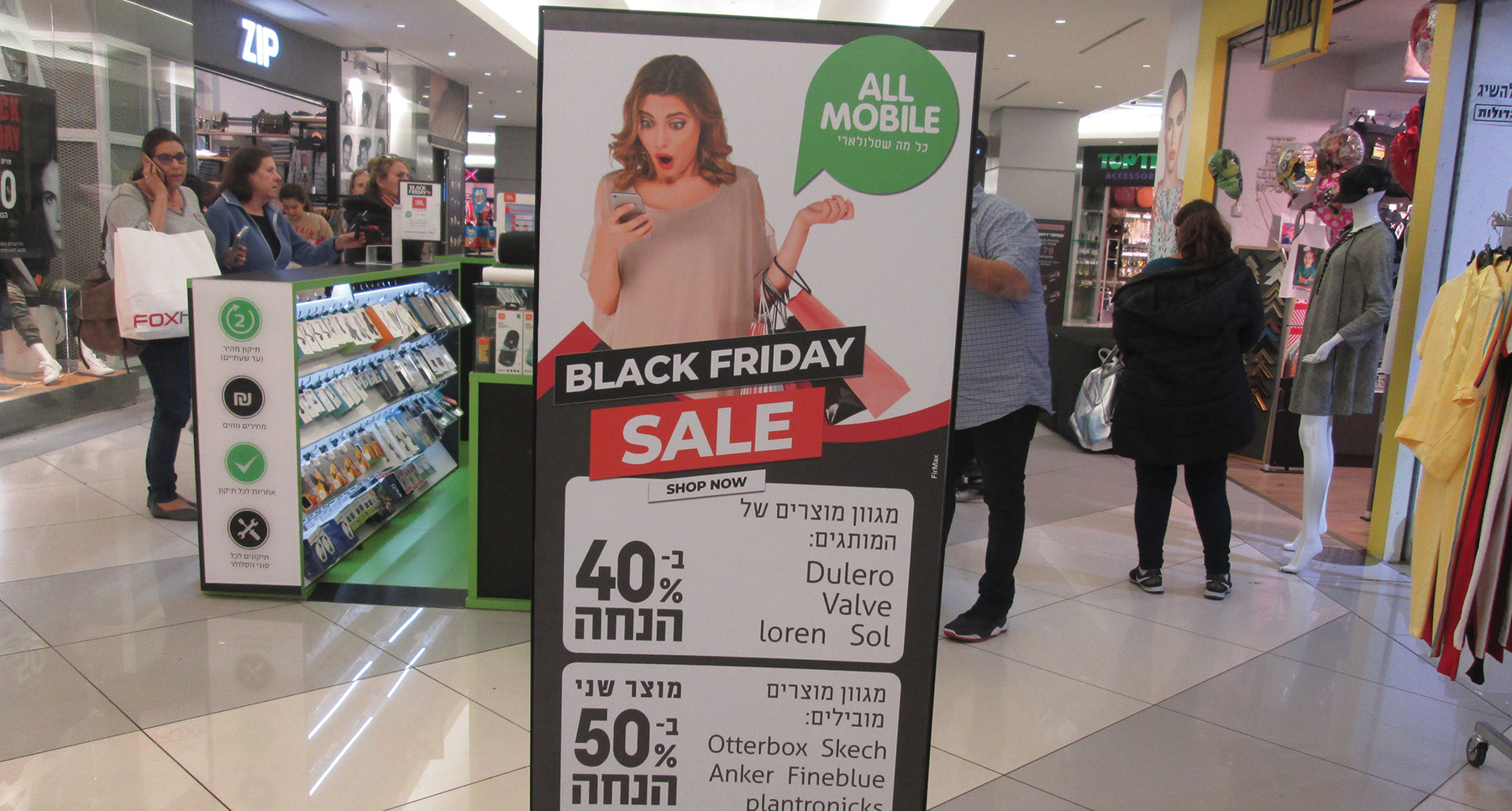 Renana Peres, a professor of marketing at the Hebrew University School of Business Administration who specializes in consumerism, said Black Friday sales in Israel have been going on for years, but that it wasn’t until three or four years ago, when Israeli interest in e-commerce began to skyrocket (partly due to lower tariffs), that people embraced the consumer day with a vengeance.

“Until then it was something similar to the Super Bowl. People knew it exists but didn’t relate to it in any way,” Peres said, referring to Israelis. “Today, Israelis are exposed more and more to retail websites around the world. We buy on Amazon and other sites much more than we used to, and we’re exposed to Black Friday ads, Christmas ads, to Chinese Bachelor’s day,” the Chinese equivalent of Black Friday.

The phenomenon has had a big impact on local spending and the way Israeli stores and manufacturers sell their merchandise.

“Consumers hold off their purchases in anticipation of huge sales events. Retailers have no choice but to join the party in order to compete with e-commerce sites.”

“The malls were packed on Friday,” and largely with lower-middle-class shoppers.

“People who can afford to buy throughout the year are less sensitive to these large discount events,” she explained. “For the rest, these discounts give you the feeling you can buy whatever you want” one day a year. “It gives you the joy of shopping.

While that can create pressure on Israelis to buy things they really can’t afford or don’t need, Black Friday can also be seen as the “democratization of commerce,” Peres said. “The cheaper it is, the more people have access.”

Speaking as a parent, Peres continued, “I would think twice about what it means to fill our houses with stuff. It also begs the question of where are things manufactured, by whom and in what environment? But from a globalization point of view, it’s come to the point where Israelis can buy anything they want. They don’t need a rich uncle coming from America to bring them things.”

And that, Peres said, has sparked competition and convinced the government to lower taxes on many imported goods.”

“It increases choice,” she said.

Not every Israel appreciates that.

“I’m not so into Black Friday and I cringe when I see Valentine’s Day merchandise in Israel,” said Amy Avital, an American Israeli whose company, Easily Moved, helps people deal with clutter. “I help people pare down and get the basics in order to keep the content of their homes manageable and orderly.”

Davida Chazan, another American Israeli, thinks Black Friday in Israel has gotten out of hand.

“I get SMS and Whatsapp messages days before and for about a week or so afterwards telling me about these specials, and frankly they’re annoying! If a shop wants to join in the ‘fun’ of Black Friday, fine. But I would prefer it to be more limited. “Enough is enough!”

While she appreciates some of the big-ticket-item sales that Black Friday can bring, Rush Tritel was sentimental for a bygone Israel.

“It can be a mixed bag,” she wrote of the increasing consumerism in her country. But, she added, “I miss the more Israeli feel that this wonderful country used to have.”