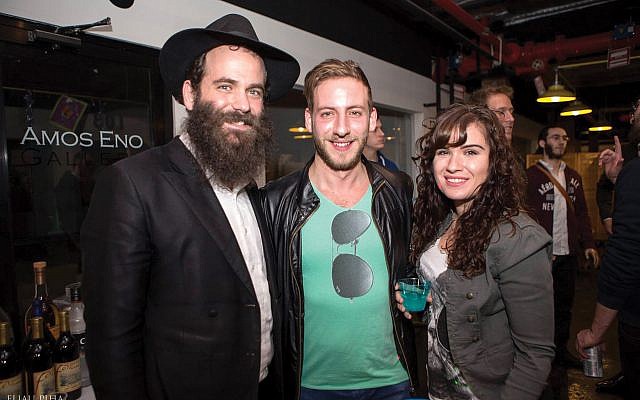 For one Brooklyn synagogue, it was the night of broken glass.

For the mayor and the governor, the attack on the Chabad of Bushwick — part of a continuing wave of anti-Semitic attacks here in recent weeks — was a chance to pick up the shards, rhetorically speaking, and stress a similar point to New York Jews: We’ve got your backs.

“In New York, there is no place for anti-Semitism or hate of any kind. We will always stand with the Jewish community,” Gov. Andrew Cuomo said in a written statement released a day after the latest anti-Semitic attack — the smashing of the front window at the Bushwick synagogue early Saturday morning. He added that he is “deeply disturbed” by the “shocking and abhorrent” attack and has directed state police to aid the NYPD in investigating the incident, which has been classified as a hate crime.

A few days before the vandalism at Chabad of Bushwick, at a city-sponsored rally against anti-Semitism in Midwood, Mayor Bill de Blasio hit a similar note, saying: “We have to be the example to the entire world of what it means to protect our Jewish community.  … Everyone must be part of the solution. We can never leave the Jewish people isolated and alone again.”

He added, “If you hear anyone suggesting an act of hatred towards the Jewish community or towards any community … you must act. You cannot be indifferent. … A true New Yorker stands up against hate.” 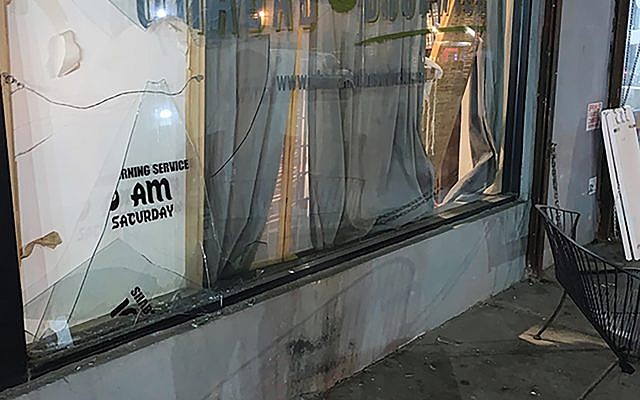 Vandals smashed the storefront shul’s plate-glass window just after 2 a.m. Saturday as Shabbat dinner was winding down. Courtesy of Chabad of Bushwick

The attack at Chabad of Bushwick took place at 2:10 a.m. on Saturday morning, said Rabbi Menachem Heller, who co-founded the congregation with his wife, Chana Heller, in 2007. As about 15 people lingered at the Flushing Avenue storefront, adults at the Shabbat table, children playing on the floor, Rabbi Menachem Heller heard “a shocking sound … a loud boom.” After hustling his kids into a corner he saw two faces looking through the door. A moment later, they began walking away.

“I was nervous, scared … we were afraid of what was going to happen next,” he told The Jewish Week Monday.

As to whether he thought the vandalism was motivated by hate, he remains optimistic. He told the New York Post that he’s “doubtful” it was random vandalism because the synagogue is “one of four storefronts that look exactly the same, and three were lit up the same way. Ours happened to be the one that was hit, on a Friday night, no less.”

However, a few days later, he was optimistic again, noting that the neighborhood has “lots of bars, lots of clubs” and some mentally ill people. “I really hope that it’s not a hate crime,” he told The Jewish Week. “Everything is possible.”

Luckily there were no injuries, despite the fact that Chana Heller, with her 10-month-old on her lap, and five more Heller children, were all sitting just a few feet from the glass.

“There are these heavy curtains, so the glass fell outward” or straight down, Rabbi Heller said.

Since the attack happened, the Hellers have received a wealth of support, both from city officials and from the local community.

People have offered financial help to pay for a new front window and for any security upgrades the Hellers decide to make. Others have come by, asking, “Rabbi, what do you need?” Even when he’s walking down the block, people he doesn’t know will yell from across the street, “Rabbi, we’re with you,” Rabbi Heller said. On Sunday, a small group of people started a “Chabad of Bushwick Stronger Than Hate Campaign” on GoFundMe for repairs, security upgrades and future programming. As of Tuesday morning, just over $2,100 had been raised.

He had a meeting about the incident that included area Councilman Antonio Reynoso, Borough Park Councilman Kalman Yeger, a representative from the mayor’s office and police officials from the hate crimes unit and other NYPD higher-ups.

“It’s good to know that hate crimes touch a nerve in the city and state,” he said.

He also received a phone call from the mayor. “He sounded really, really frustrated and disgusted by the whole thing,” Rabbi Heller said.

On the Chabad of Bushwick’s Facebook page, Rabbi Heller urged people to combat all forms of hate.

“We face this unfortunate experience not with discouragement, but with solid determination: to continue celebrating our faith, sharing our rich heritage, and offering our culture in an inclusive and warm environment.

“At the same time we acknowledge the disturbing and increasingly frequent incidents of hate and prejudice in our New York community and its destructive and divisive effects, especially on young people. We encourage each other and the public to stand up against it, whenever it occurs, whatever form it takes, and towards whomever it is directed. An attack on one of us is an attack on all of us.”

On Feb. 14, two days before the Bushwick vandalism, the mayor discussed the increase in anti-Semitic attacks during his speech at the Kingsway Jewish Center.

Hate crimes have spiked, he said, up 74 percent (from 27 to 47) so far this year compared to the same period in 2018. More than two-thirds of those crimes targeted the Jewish community, he said, adding that the NYPD “was putting more police officers in the areas of concern.”

There have been four violent attacks on chasidic men in Crown Heights since mid-January, as well as a series of incidents in which Jewish tweens and teens have been shoved. In addition, a yeshiva in the upstate town of White Sulphur Springs was set on fire and swastikas were spray painted on the building.

The mayor also took a strong stand against the Boycott, Divestment and Sanctions movement against Israel, saying: “Maybe some people don’t realize it, but when they support the BDS movement, they are affronting the right of Israel to exist and that is unacceptable.”

Noting the attacks in Paris a few years ago and at Pittsburgh’s Tree of Life Synagogue in October, the mayor argued that Jews need to be protected as much as back in 1948.

“There’s a problem and we have to get to the root of it. Israel is just as necessary today as ever, and it must be protected,” he said, adding, “You can disagree with the government of Israel on any particular matter. Everyone has that right. But don’t do anything that attacks the fundamental right of Israel to exist.”