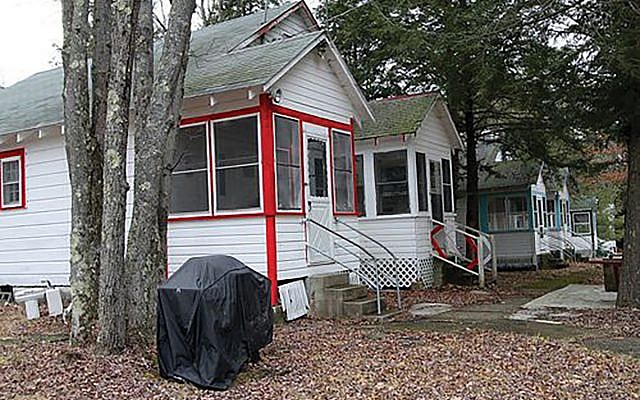 The measles scare, which has wreaked havoc on schools and families on the streets of Williamsburg and Borough Park, is now reaching into the foothills of the Catskills as the summer bungalow season nears.

Sullivan County — where the summer population triples to 250,000 as Orthodox families head for cooler climes — is urging camp directors and landlords to require all residents to show proof of measles vaccination, immunity or a medical exemption.

The adjacent Rockland and Orange counties, as well as state health officials, have issued similar warnings.

“An outbreak [of measles] at your camp could result in campers who are un-immunized being sent home, or even in your camp having to be closed early for the season,” a letter from the New York State Department of Health reads.

In response to such letters, the owner of one bungalow reportedly became so concerned that she immediately had all five of her children vaccinated, which is just what health officials were hoping for.

“We want to protect everyone should there be another case of measles,” said Nancy McGraw, Sullivan County’s director of public health. She said the county has had only two cases of measles since March, but the summer influx changes the picture. “In the event of an outbreak, we can’t mandate vaccination but we can mandate exclusion,” she said. “If anyone is unsure of their vaccination or immune status, they should check with their health provider.”

Despite fines and school closures issued by the New York City Department of Health, there have been 25 new measles cases (in Brooklyn and Queens) reported in the past week, bringing the total number to 523 since September. More than 500 of them have been in the Orthodox Jewish community. 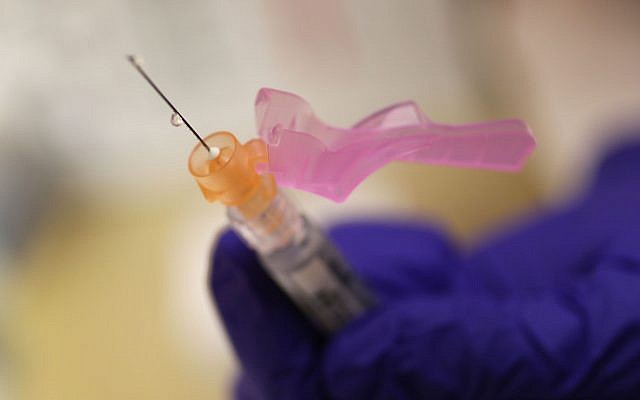 There was such heightened concern about the highly contagious nature of the virus that a debate scheduled for last Thursday involving the middle school debate teams of four Orthodox Jewish day schools was canceled because one of those schools, Flushing’s Yeshiva of Central Queens, was closed by the city Health Department for failing to prevent un-vaccinated students from attending class.

The school was closed from Monday to Wednesday and reopened last Thursday, the day of the debate contest. But on Wednesday, Rabbi Joshua Lookstein, head of the Westchester Day School in Mamaroneck, announced that his school would not be participating in the debate because of concerns raised by its school nurse.

“She was aware of the closing of one of the other schools and she wanted to be cautious. We felt bad about the disruption,” he said.

“We have 233 confirmed cases since our outbreak began in October … with many more cases going unreported,” he wrote, noting that Rockland’s outbreak began when seven “travelers from overseas” who were infected with measles visited.

Day suggested that all visitors from abroad be required to show immunization certificates before being allowed into the country.

He acted just one week after a meeting held by anti-vaccination advocates in the Rockland County town of Monsey drew an estimated 200 to 300 people — some coming from as far away as Brooklyn and New Jersey on free busses — with promises of measles experts providing a “highly informative night of science and discussion addressing … concerns, fears and doubts” about the vaccinations. But the crowd heard instead from the discredited British doctor who helped trigger the anti-vaccine movement with a fraudulent paper linking vaccines to autism that caused him to lose his medical license, and a rabbi who has long been against vaccinations.

The gathering caused the Agudath Israel of America, the largest charedi umbrella group, to issue a statement titled, “Nonsense and Insults at a Recent Monsey Gathering.” It noted that the gathering had been “heavily promoted in Orthodox Jewish areas [and] featured figures in the anti-vaccination circuit.” It said the rabbi’s assertions — including his claim that Mayor Bill de Blasio was “scapegoating” chasidim and being “a very, very sneaky fellow” — “are nonsense, and his personal attack on Mayor de Blasio is deeply offensive.” 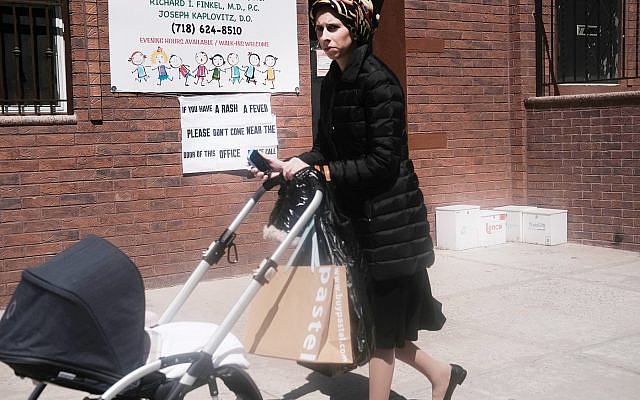 A woman pushes a stroller past a doctor’s office in Williamsburg that warns people with rashes or fever not to enter the office. Getty Images

Meanwhile, other rabbinic leaders in Monsey wrote a letter urging that “everybody should do their utmost to minimize this illness by getting the proper immunization for it.” It then quoted from a rabbinical court’s decision in Jerusalem directing people to be immunized and saying that “parents do not have a right to endanger their children” and other people’s health.

Media reports about the measles outbreak – as well as extensive coverage of last week’s Monsey gathering – have given the erroneous impression that Jews were the cause of it all. As a result, it has reportedly triggered some anti-Semitic incidents in Williamsburg and Monsey, according to Evan Bernstein, New York/New Jersey regional director of the Anti-Defamation League.

“For us, this is something we see as a community health crisis, and laying blame on an entire religious group as the sole cause of the outbreak is unfair and wrong,” he said. “We urge sensitivity in discussing this issue. The average person equates the whole crisis to this one group, which can create anti-Semitism and canards that can metastasize.”

The virus is currently found nearly exclusively in the Orthodox Jewish community because it was brought to Brooklyn from Israel, where the virus has been flourishing since the beginning of 2018. But the anti-vax movement extends well beyond Williamsburg and Borough Park: A sampling of New York City school vaccination data found that some of the lowest rates of vaccination were in progressive schools. The following schools had vaccination rates below 90 percent: Windmill Montessori (85.9), Progressive School Of Long Island (83.1), The Blue School (76.6), Brooklyn Waldorf School (71.4) and Sarah Lawrence Early Childhood Center (66.7). 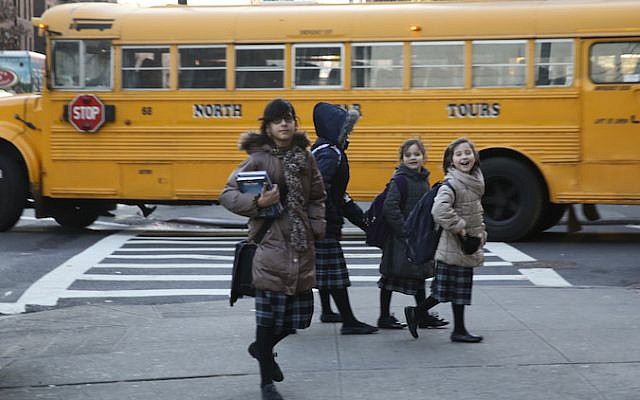 Efforts to counter the anti-vaccination movement included a discussion last week at the New Eichler’s in Borough Park, Brooklyn, by Ann Koffsky on her 2015 book about the importance of vaccination, “Judah the Maccabee Goes to the Doctor.”

She said she was prompted to write the book when she learned that Jewish parents were mistakenly claiming religious exemptions for their reason in not vaccinating their children.

“I couldn’t believe they were saying the Torah says, ‘Don’t vaccinate,’” she said.

“It’s sad that my book is so relevant today — I couldn’t have anticipated this,” she added. “All we can do is fight back with information. … This is not the Orthodox community. This is a small segment of the community that is sadly misrepresenting the vast majority of our community.”

Community activist Rivkie Feiner, a strong supporter of vaccinations, agreed, saying it is only a relatively small number of Jews who refuse to have their children vaccinated and who are putting their children in danger.

“People walking into a room two hours after someone was there who had been infected can still get it,” she said. “And they are contagious for four days before they have any symptoms. It’s a perfect storm.”

She said that not only should children be vaccinated, but everyone between the ages of 30 to 62 should check with their physician to see if the measles vaccine they received as a child is still effective. She noted that one 55-year-old man who thought he was immune because of the vaccination he had as a child contracted measles he caught during a visit to Detroit. It incapacitated him so much that he made a video of his experience.

Even as Jewish community leaders and rabbis were telling people that vaccinations are safe, so-called “measles parties” continue to be held in Borough Park. Blimi Marcus, a leader of the pro-vaccination movement, said they attract parents who bring their non-immunized children to play with other children who have the measles in order to “naturally” immunize them.

“These parents have been told that going through the measles naturally will make their children stronger,” Marcus said. “The anti-vaxxer movement has preyed upon deep fears over their children’s safety and well-being.”

At a press conference last month in Williamsburg, New York City Health Commissioner Oxiris Barbot said, “We don’t want children or adults to be unnecessarily exposed to measles because there are serious consequences to that.” At the event, Deputy Mayor Herminia Palacio noted that the anti-vaxx movement has been “very aggressive … with pop-up phone numbers and conference calls where a lot of misinformation is being handed out.”

“I want to make sure that we make no mistake about it — there is a campaign with very intentional efforts to give misinformation and we’re here to correct the record. … Exposing your unvaccinated child to measles is very dangerous and it could even be deadly. We urge everyone to avoid this practice. This is a public health emergency.”