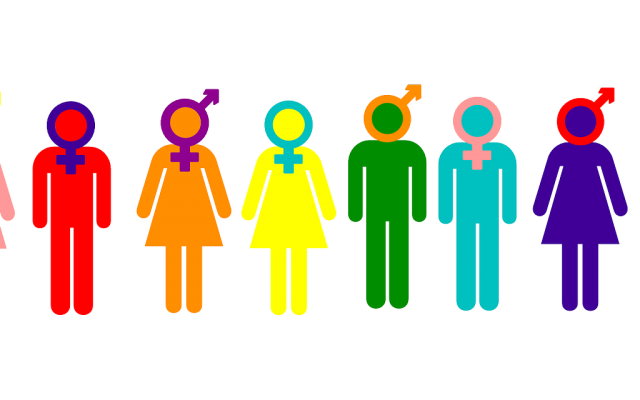 This past January I became the head of my school’s Gender and Sexuality Alliance  (GSA). Last year, two awesome seniors started the club at my small Jewish day school in Overland Park, Kansas. This was a huge step for my oftentimes conservative school, and it finally created a place for queer students and allies to get together. This club meant a lot to me and to other students at my school, but since there were only a few members and the founders were seniors, it ended when they graduated.

At the beginning of this school year, the faculty adviser of the original club asked me if I’d like to restart the club and lead a week-long class during “winterims”— a fun week of easy classes right when we get back from winter break to help bridge the gap between the holidays and starting school again. I gladly agreed to take this on and was super excited about it, but I was also a little nervous. I knew that my school needed this, and that creating a safe space for LGBTQ+ students—particularly in a Jewish environment—was extremely important to me, so I wanted to make sure I did a good job, and sparked interest in having the club continue past winterims.

One of the first conversations I had with our faculty adviser was about why some students from our school graduate and then come out as queer a year or two later. In other words, why don’t students feel comfortable being out at my school? There can’t just be one answer since everyone is different, but several of those former students who I’ve talked to have said that they wished there was a club like ours when they were students, and that it would’ve made it so much easier for them to be open about their identities. I don’t want any other students to feel this way ever again, which is why I took this project on, and why I feel that it’s so important for it to continue.

As much as I was excited to restart this club, I was also worried about possible backlash from some of the faculty at my school. The faculty adviser and I decided that the club should be open to both middle and high school students, as it previously had only been open to 8th grade and up. I felt very strongly that all students should be welcome in the club, and my faculty adviser agreed; but, I knew that in the past this had been a point of contention since some teachers and administrators believe that LGBTQ+ content isn’t acceptable for middle school students.

So, I was somewhat pessimistic as to how this would play out. Today, 90% of the kids in the club are in middle school, and even though I’ve had to adapt certain lesson plans to make sure they’re appropriate for younger students, it’s been awesome seeing all of these middle schoolers so involved and interested in LGBTQ+ identities and issues. Plus, having more students, and more younger students, involved in the club can only help ensure its longevity. 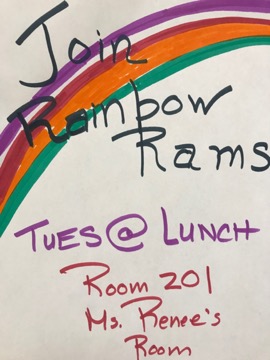 A poster for the Rainbow Rams club. Photo courtesy of Nina Baran.

It was important to me for the new GSA to continue, which was a feeling that was only solidified on the last day of the winterim as the group took GLSEN’s school climate survey, and rated our school in between “hostile” and “passive” on their scale. The results were shocking to all of us. Passive made sense, but none of us had ever experienced anything that would suggest overt hostility towards LGBTQ+ students. However, when we looked at the questions, it was clear that our school’s lack of any LGBTQ+ resources was a real issue.

Until last year, when the club was first started, we didn’t have a GSA; we also don’t have any LGBTQ+ books and students aren’t aware of staff who are trained in LGBTQ+ inclusivity. It wasn’t that our school was anti-LGBTQ+ per se, it just didn’t institutionally acknowledge these identities at all. Students openly discuss queer identities, but the survey highlighted a larger problem within the institution. My goal with the survey was to see where our school is and how we can improve. After seeing the results, I knew that the club was something our school desperately needed, and that we had a lot of work to do.

We renamed our club “The Rainbow Rams,” since our school mascot is the ram, and we made posters to get the word out. The club quickly grew from four students to 10-15 students. For a small school like mine, this is huge. But, it isn’t just about how many kids are in the club, it’s about being an active LGBTQ+ presence in the Jewish community. All of our middle and high schoolers know about the club and that they’re welcome at any time. When people come to visit our school, they see the posters in the hallway and immediately know that our school is outwardly LGBTQ+ inclusive.

This March, the local Jewish Community Center (JCC)  hosted a choir performance celebrating the 50th anniversary of the Stonewall riots. I helped out during the performance and several other members of the club came to watch — coming together at the intersection of the Jewish community and the LGBTQ+ community. LGBTQ+ identities may still be marginalized and considered taboo in a lot of ways, particularly in some Orthodox and Conservative Jewish communities, but by being a vocal presence, we’re opening up the conversation and showing that even these communities can engage in open dialogue about this topic.

We’ve done a lot of good work so far, but my goal is to eventually have our school be fully inclusive and welcoming. I don’t know if that will happen while I’m a student there, but I’m going to work as hard as I can to get us there. Just opening up the conversation has been a game changer, and I can’t wait to see how much further we can go.