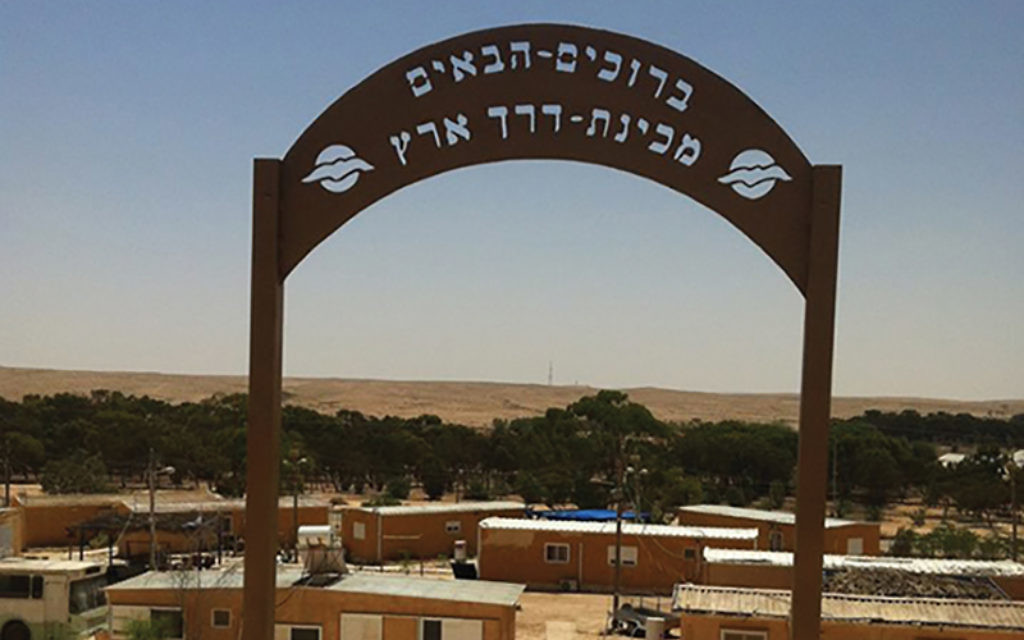 A decade after he left his native Belarus for Israel with his family, Boris was about to finish high school and to begin the army, and had given little thought to his future. Maybe he’d become a truck driver after he left the army.

Then he heard about Derech Eretz.

Four years ago, a Derech Eretz representative visited Boris’ high school in a youth village (a cross between a boarding school and a kibbutz) in the Negev region and described the school’s plans to teach participants leadership skills, to teach them more about Zionism and Israeli history than the students had learned in school, to teach them to take control of their futures. “We are looking for pioneers,” the students heard.

Boris’ eyes lit up, said Yonatan Kischinovsky, a co-founder of Derech Eretz, who was in New York City at the end of last month.

Boris signed up. He became part of Derech Eretz’s first cohort of 23 about-to-become-soldiers teenagers who met on a Spartan campus near the Egyptian border in trailer-type “caravan” buildings that they helped erect.

Since then, Derech Eretz (literally, “the way of the land,” but colloquially used to describe common courtesy) has expanded to three sites in the Negev with 150 students of both genders (men and women are housed separately, with strict rules against fraternizing), with plans to grow to 1,000 participants at five campuses in the Negev and Galilee by the end of the decade.

The growth of Derech Eretz (derecheretz.org.il) reflects the expansion of Israel’s post-high school mechina (preparatory) programs since the first ones were formed some two decades ago, aimed primarily at Israelis from Modern Orthodox backgrounds. Today, there are nearly four-dozen mechina programs in the country, serving some 5,000 Israelis from a variety of religious and social backgrounds, Kischinovsky said.

The mechinot are part remedial education, part training school, part preparation for life in the army and afterwards.

Many Israelis leave high school without enough of a sense of identity — or the educational and general life skills — to flourish as adults, Kischinovsky said. The best time to reach them: during the eight-month period between high school graduation and army induction. “That is the last point when we can affect them.”

Which, he said, is why he and Avi Cohen, buddies from a tank unit in the army a decade earlier, decided to start Derech Eretz. Kischinovsky, who earned a bachelor’s in social work and a master’s in conflict management and mediation, subsequently worked on a goat farm and worked for OneFamily, a nonprofit supporting terrorism victims. Cohen was a lawyer. Both, said Kischinovsky, had grown worried by what they saw as a decline in dedication to Israeli values.

The answer, the pair decided, was a mechina. “If we wanted to move the needle, we must give them the tools … if we wanted to make a change in Israeli society,” Kischinovsky said, “we wanted to work with the youth.”

While several such programs for Israeli teens and young adults already existed, Derech Eretz would be different, Kischinovky and Cohen decided. Most existing mechinot focused either on the “elite,” people already on the fast track to success, or on “at-risk” youth who seemed headed to dead-end futures.

Derech Eretz would concentrate on the middle group, filling a mechina “vacuum” for the 70 percent who constitute “the majority of the youth of Israel … the face of what Israel will look like in the future.”

“We met them in the army,” Kischinovsky said. Derech Eretz would focus on people living in the “periphery” of the country, in the southern Negev and northern Galilee regions, away from the major urban centers in the center of the country.

Ironically, neither Kischinovsky, 33, nor Cohen, 34, are from the backgrounds whose interests they now promote. Both grew up in upper-middle-class families in urban areas. Kischinovsky is from Jerusalem; Cohen, from Tel Aviv.

They chose the name Derech Eretz as a form of recognition for the statement in the Midrash that “Derech eretz kodma l’Torah,” common courtesy comes before observance of the mitzvot — in other words, first be a mensch.

They lobbied in the offices of the Jewish Agency, government ministries, and the army, looking for money and moral support; the Jewish Agency became one of Derech Eretz’s founding partners for its first-year, one-million shekel (about $250,000) budget; the current annual budget is $1.2 million, funds coming from the Jewish Agency, the Ministry of Education, local municipalities, JNF-UK, and private contributors.

Derech Eretz is not affiliated with any political party or religious movement; its students come from all parts of Israeli life. T.

Derech Eretz has succeeded in reaching the Israelis overlooked by the earlier mechinot, who “want to be part of the story” of the country, said Erez Eshel, who has established several of the first leadership-training mechina programs. Today he leads the Ein Prat Israel Academy for Leadership, a mechina based in Kfar Adumim, and is working to found similar programs in Europe for “a new generation of young people who take responsibility for the future of their nations. It’s not needed only in Israel.”

A one-time paratrooper, Eshel became active in the mechina movement after the assassination in 1995 of Prime Minister Yitzhak Rabin by a young religious Zionist.

Derech Eretz has earned a reputation as a mechina that addresses the spiritual needs of young Israelis, he said.

So far, all the Derech Eretz students are Jewish, but Kischinovsky said plans are being considered to one day open the program to non-Jews such as the Druze, who also do army service.

Students, even those from poor families, pay “a nominal fee” to enroll in Derech Eretz, to feel invested, Kischinovsky said. “There’s nothing free in our program.”

The father of three spent 10 recent days here, in Chicago and Los Angeles “to find partners” for such initiatives as an “adopt a student” project and a scholarship fund.

In his meetings, he described how Derech Eretz operates — like a Birthright Israel program for Israelis. Derech Eretz runs early-morning-to-late-night programs for Israelis who are about to enter the army, who are in the army, and who have left the army. (Its alumni association now has 260 members.) There’s pre-army physical training. Participants do volunteer work with senior citizens and at-risk youth in local communities. They take field trips around the country. Half of them go on to an institution of higher learning. All of its participants go into the army; 80 percent enter combat units; of those, 40 percent become officers.

Some families are skeptical at first about sending their children away to take part in Derech Ertez, Kischinovsky said; the concept sounds too foreign. In the end, he said, they become supporters. “The parents say that Derech Eretz gives them back ‘a new child.’”

Boris signed up because he felt he “was not mature,” Kischinovsky said. In Derech Eretz, “he grew up, he learned.”

Boris, who ended his army service earlier this year, called Kischinovsky the other day to offer thanks. He said he is working to be able to attend Ben-Gurion University.

After Boris graduates, Kischinovsky said, he intends to return to his hometown to teach youth the sort of skills he has learned in Derech Eretz.

Boris said he would not have had these goals had he not been part of the mechina.

“That’s exactly the place we want to take [the students],” Kischinovsky said — where they have firm plans and want to reach out to other Israelis. “We want them to know enough to dream.”