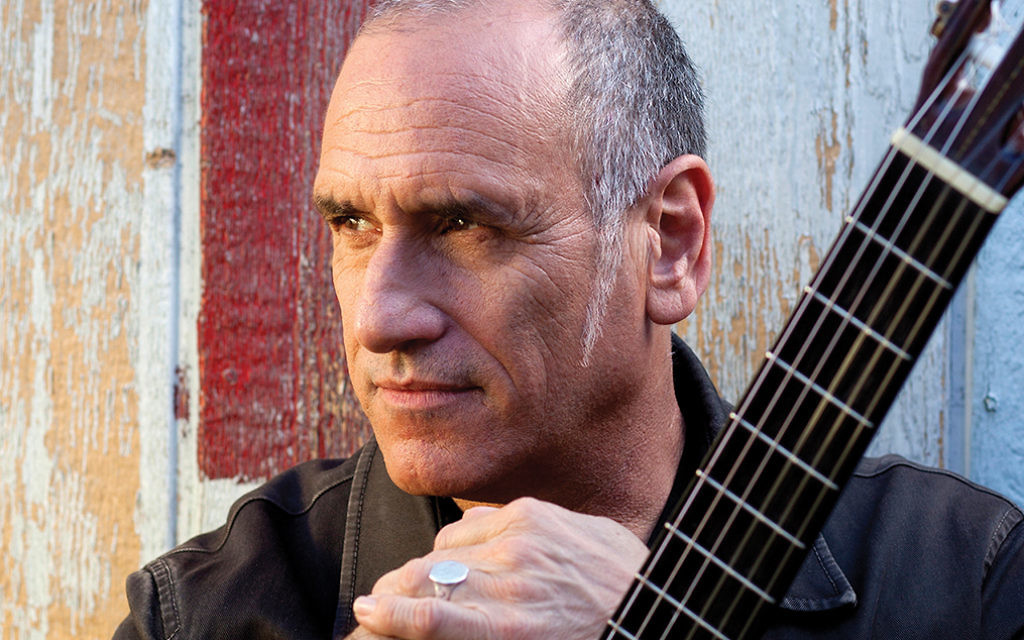 At 60 David Broza is remarkably unchanged from the young singer-songwriter I first met 23 years ago. The sideburns and hair are white and there is less of the latter, but he still smiles easily, laughs heartily and engages warmly. Musically he is as protean as ever, constantly trying out new collaborators, looking for new poems to set to his distinctive music, testing and prodding his audiences and himself.

Broza’s Tribeca apartment is a tone poem in black, gray, silver and white, from the kitchen and living room furniture to the art and family photos that adorn the cool, blank walls. On a warm June morning he matches the décor, wearing a black work shirt over a black tee.

Unsurprisingly, given his long-standing willingness to explore his own musical past while forging ahead, he is planning an appropriately retrospective concert for June 26 as a sort of acknowledgement of the milestone birthday he is celebrating.

“I’m doing a challenging show at City Winery,” he says. “It will be in two halves and two hours long. I’m dividing the evening into ‘inspirations’ and ‘creations.’”

The inspirations will be a retrospective of “songs that influenced me when I was growing up, when I was 14, 15, 16,” Broza explains. “The second half will be songs of my own, songs that I created.”

What makes the evening different, he continues, is that the audience will be given a list of 60 songs and “they get to pick which ones I’ll do,” 10 songs for each half of the performance.

After that event, he will repeat the process at the City Winery locations in Chicago and Atlanta. Needless to say, no two events will be the same, but one thing won’t change.

“It’ll be just me and the guitar,” he says. “Since Day One of my career, my biggest vision is my one-man show. After 40 years of performing, that hasn’t changed.”

His phone rings, he excuses himself and takes a call from Tel Aviv, a friend asking him to dinner that evening.

“He didn’t know I was in New York,” Broza says afterwards. “I guess I could have flown in for dinner. An artist’s job is to be on the road and meet the audience.”

Although he still thinks of himself as an Israeli and maintains a home in Tel Aviv, for the past three decades Broza has divided his time between New York, Madrid and the Israeli metropolis.

He had thought he would eventually return to Israel full-time but his second wife, fashion designer Nili Lotan, was based professionally in New York, so for the foreseeable future he’s still bicoastal — Atlantic and Mediterranean, that is.

Of course, those are the coasts that are most prevalent in his music with its dynamic blend of American words, Middle Eastern flavors and flamenco strut. His most recent CD, a mercurial collaboration with the Andalusian Orchestra Ashkelon, reaffirms the latter two of those three elements. It is a triumphant mix of the orchestra’s old-line, string-driven, Israeli-Arabic sound with Broza’s driving, percussive guitar and his frequently plangent Hebrew singing.

Broza’s singing voice has changed remarkably little over his four-decade-long career. He sounds a little huskier, there’s an appealing bit of a burr underlying his top notes now, but the range is pretty much the same. What age has given him as a singer is a greater expressiveness, a patina like you find on good wooden furniture.

His daily routine remains unchanged from what it was when he was in his 20s. “I wake up at 6:30 a.m., I work out at 7,” he says. “I return phone calls and answer e-mails, then I have a Middle Eastern style breakfast with my wife, a little relaxed time together. Then I practice guitar for three hours, no matter where I am. My wife’s business is only three blocks from home, so we usually do lunch together.”

The secret, he says, is to “live in moderation.”

His diet has remained essentially unchanged; he takes an occasional glass of wine at dinner but “I don’t smoke, I don’t do drugs.”

It may not sound very rock-and-roll, but Broza finds sufficient challenge in his never-ending parade of new projects.

“I’m focused on what I’m out there to do,” he says. “My culture is so rich and eclectic.”

The American side of that culture is equal parts rootsy music — ranging from Johnny Cash, whom he discovered at 14, to Townes van Zandt, whose unpublished poetry Broza set to music and recorded at the request of the late Texan troubadour — and modernist poetry.

“I mastered my search for American culture by meeting it face to face,” he says. He met and became friends with numerous contemporary poets and added to his palette by immersing himself in the work of older voices like Theodore Roethke.

Illustrating a musical point, Broza picks up a guitar, snaps a capo into place and plays his striking setting of Roethke’s “My Papa’s Waltz.” His fingers dance on the fretboard while he fingerpicks a counterpoint that rings like silver coins in the air. Roethke had been dead a couple of decades when Broza wrote this setting, but it is redolent of the whiskey-and-cigarette-smoke atmosphere of the poem, catching the mixture of regret and reminiscence at the heart of the verse.

He sighs and smiles a little.

“The process of learning has not become quicker, it takes time for things to sink in,” he says. “But I’ve done close collaborations with Israeli poets, with American poets and Spanish poets.”

Broza leans back on his stool, then says, “My tray has all these goodies [on it] now.”

David Broza will be performing his “songbook,” an all-request evening, on Sunday, June 26 at 8 p.m. at City Winery (155 Varick St.). For information, call (212) 608-0555, or go to citywinery.com/newyork. His latest CD, “David Broza and the Andalusian Orchestra Ashkelon,” is available on the Magenta label. The DVD of his film “East Jerusalem-West Jerusalem” is available from Film Movement.