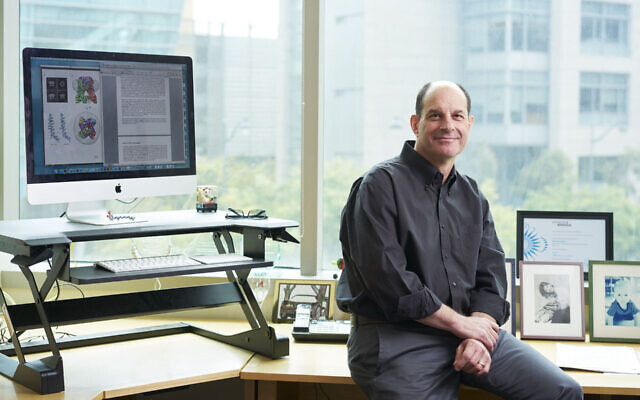 WINNING TOUCH: Brooklyn native David Julius, a professor of physiology at the University of California, San Francisco, was awarded this year’s Nobel Prize in physiology or medicine on Monday. (JTA)

POWDER KEG: Rep. Ritchie Torres, D-Bronx, spoke to the annual meeting of the Jewish Federations of North America Sunday, calling for vigilance in the face of rising extremism. (JFNA)

NAME GAME: Our partners at Kveller have a list of “18 Jewish Baby Names Inspired by New York,” including Barbra (as spelled by you-know-who); Grace (as in Paley, the bard of Greenwich Village); and Barney, inspired by Barney Greengrass, the Upper West Side sturgeon king.

Alan Kalter, who served as the announcer and comic foil for David Letterman during his two-decade run on CBS’ “Late Show,” died Monday at a hospital in Stamford, Connecticut. He was 78. Kalter was born in Brooklyn and raised in the Long Island communities of Little Neck and Cedarhurst. Rabbi Joshua Hammerman of Temple Beth El in Stamford told congregants, “Beyond his fame and his golden voice, Alan was a past president of TBE and a true mensch, who was deeply committed to Jewish values and the Jewish people and was especially devoted to this, his home community.” (Newsweek)

UJA-Federation of New York announced its 2021 Ruskay Fellows, 19 rising leaders in the New York Jewish nonprofit sector “who are ready to make an impact on the Jewish community.”

Naomi Jacobson is reviving her performance as Dr. Ruth Westheimer in the one-woman show, “Becoming Dr. Ruth,” at Theater J in Washington, D.C., through Oct. 22.

“Mendelssohn on the Hudson” is a self-guided historical and musical walking tour, experienced via smartphone or another internet-enabled device, that follows the footsteps of the German Jews and others who ﬂed 1930s Nazi Germany to settle in Washington Heights. The self-directed historical tour route – created by Inwood Art Works – includes West 181 Street to the Heather Garden in Fort Tryon Park, and points in between. Explore and listen to each episode here.

Join the Museum of Jewish Heritage for a launch program for “What They Didn’t Burn: Uncovering My Father’s Holocaust Secrets,” Mel Laytner’s new book about desperate survivors turned hopeful refugees who rebuilt their shattered lives in America, all the while struggling with the lingering trauma that has impacted their children to this day. Moderated by Jane Eisner. Register here. 7:00 p.m.

Lilith magazine and Shakespeare & Co. invite you to celebrate the paperback publication of “Evening: A Novel” by Nessa Rapoport. The author will be in conversation with her daughter, writer and editor Mattie Kahn. RSVP here. 7:00 p.m.