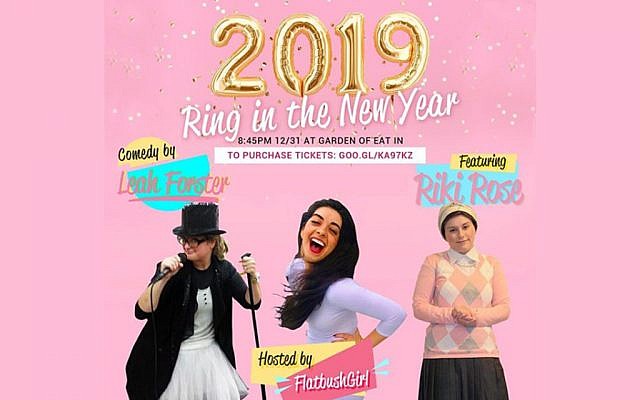 Two Brooklyn kosher eateries were forced to cancel this comedy event after Kashrut authorities threatened to pull their certification because one of the comics is a lesbian. Screenshot/Instagram The Flatbush Girl

Rabbis from the Vaad HaRabanim of Flatbush, which grants kosher certification, threatened to pull their  supervision of the Garden of Eat In and Orchidea if the Orthodox lesbian comedian performed at either venue.

Forster talks about growing up in the Orthodox community as part of her act. She does not talk about her sexuality or personal religious observance, she said in a video posted on Facebook.

Forster said in the post on Thursday that the owners of both venues apologized, and offered to help find her a new place to perform her show. The restaurants said that if kosher certification were yanked they would have to close up shop, the New York Daily News reported.

Forster said she has filed a complaint with New York’s Commission on Human Rights.

Forster’s New Year’s Eve bash was going to be hosted by Adina Miles, known as “Flatbush Girl,” an Orthodox mother and social media star. In the Daily News, she decried “the mafia nature of the kosher certification establishment who overstep their power and try to control community discussion and the restaurant owners.”

Publicity for the New Year’s Eve show says that it will be held in a Brooklyn venue to  be announced. Kosher food will be served.