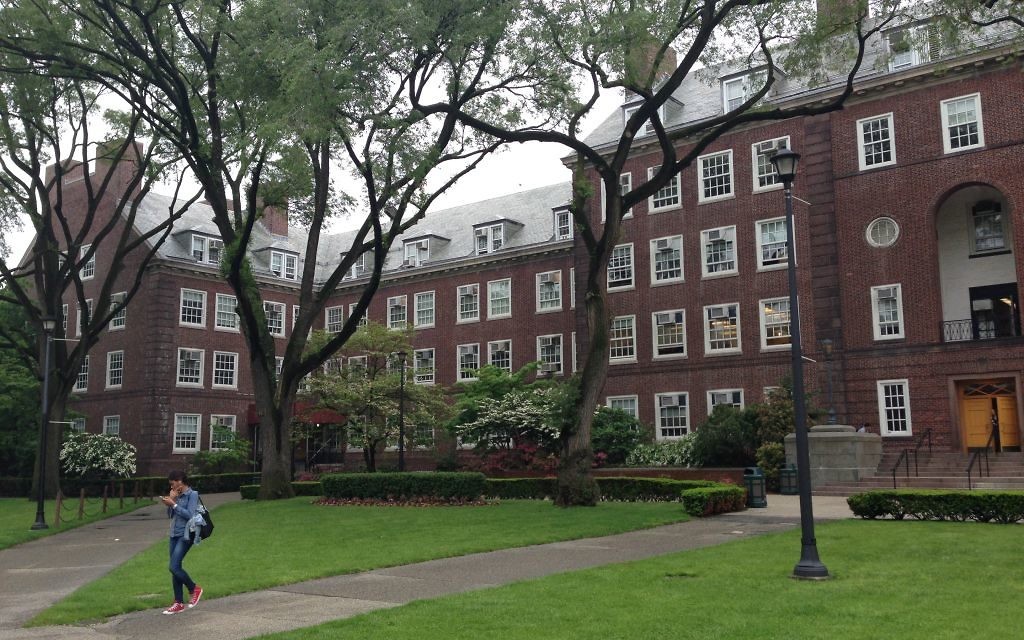 In recent years, the BDS and anti-Israel battles on Brooklyn College’s leafy campus have been borne largely by Jewish students.

They have pressed administrators to censure professors they believed were unfair to Israel. They have countered pro-Palestinian student activists, set up informational tables on the quad making Israel’s case and written op-eds in the campus newspaper.

Last week, though, the anti-Israel fight landed a right hook squarely on the jaw of the Faculty Council, the college’s legislative body, which is headed by an Orthodox Jew. If Brooklyn College’s faculty, including its Jewish members, has largely been on the sidelines in the Israel wars, this week they were in the fight, in the wake of a troubling incident that shook members of the council.

The incident happened on Feb. 16, when a group of students chanting slogans including “Zionists off campus” broke up the council’s meeting.

“I’ve had numerous phone calls from faculty members who were there,” said Yedidyah Langsam, who chairs the council. He said they all reported feeling varying degrees of fear, including one professor who said she left the meeting “trembling.”

The incident has the faculty thinking about lodging a formal complaint, and it has also renewed a debate about tactics when it comes to confronting anti-Israel activity.

There are conflicting reports as to exactly what happened at the Faculty Council meeting, but what everyone interviewed by The Jewish Week agrees on is that about 30 minutes into the meeting, a group of about 10 students walked to the front of the room. They immediately began chanting a list of demands that ranged from support of increased pay for faculty members to calls for divestment from the for-profit prison industry. Langsam, they agree, was forced to adjourn the meeting.

It’s agreed that the students chanted something about Zionism, either “Zionists off campus” or “Zionism off campus,” and that some faculty members cheered and applauded, even after the anti-Zionist chants, although it’s not clear which demands they were cheering for.

Langsam, who wears a kipa, said that when he told the protestors they were out of order, one of the protestors called him a “Zionist something.” He doesn’t remember what the something was but said it was definitely meant as an insult.

(While JTA reported that a professor at the meeting said the protestor called Langsam a “Zionist pig,” none of the four professors at the meeting interviewed by The Jewish Week was able to confirm that.)

What is clear is that a substantial contingent of professors left the meeting feeling scared.

Assemblyman Dov Hikind, who within hours of the meeting issued a news release calling for CUNY Chancellor James B. Milliken to take action to prevent future disruptions, said that he’s received calls from, as of Tuesday, nine professors.

“There’s a lot of fear,” he told The Jewish Week. “When you’re intimidated and you have fear — fear is a very powerful thing.

“You can sit back and say, ‘What’s the big deal?’” he continued. “They interrupted a meeting and they yelled ‘Zionists out of CUNY.’ … [But] These students didn’t just sit back and chant — they took over the meeting.”

On Tuesday, a week after the demonstration, four of the student protestors apologized to Langsam in his office and agreed to apologize to the Faculty Council as a whole. “I take this as a positive action,” he said in an email.

Kenneth Waltzer, executive director of the newly formed Academic Engagement Network, a coalition of professors working to counter BDS (boycott, divestment and sanctions) activities on campus, said this is the first time he’s heard of a BDS protest targeting faculty rather than students.

He was quick to praise Brooklyn College President Karen Gould’s speedy denouncement of the protest, saying “she was quick to respond and said all the right things.”

The day after the incident Gould sent an email to faculty, staff and students condemning the protest as “disruptive” and “unacceptable” and the “hateful anti-Zionist and anti-Jewish comments” as “especially abhorrent.”

A college spokesman told The Jewish Week that Gould has asked the college’s Office of Judicial Affairs and its legal counsel to investigate the incident “and to take appropriate actions based on their findings.” Asked what penalties the students might be given, the spokesman said it would be “premature to speculate” but that “appropriate action” would be taken.

Langsam and Hikind also praised the quick and forceful response but were skeptical as to whether, in the end, any students would be punished. They pointed to a 2013 incident when four pro-Israel students were thrown out of an anti-Israel forum on campus. While the incident was investigated, no student was disciplined and the dean in charge was given only “a slap on the wrist.”

In response to Gould’s email, student Sarah Aly, who is active in Students for Justice in Palestine (SJP), released a statement on her Facebook page that she said was from a group called the Brooklyn College Student Coalition criticizing Gould for conflating anti-Zionism with anti-Semitism.

“This tactic is often used to disparage any opposition to Zionism and seriously minimizes the reality and severity of actual anti-Jewish sentiment,” the statement reads. Aly did not respond to a request for an interview.

Langsam said there’s no doubt, at least concerning the insult lobbed at him, that the students’ motivation was anti-Semitism.

“I’m not easily identifiable as being Zionist, but I do wear a yarmulke and a beard. It was very clear when she turned around exactly what she meant,” he said.

“This is the first incident that has been directed toward me,” added Langsam, who chairs the computer science department. “I’m not feeling threatened, but there is a serious problem.”

Brooklyn College Hillel director Nadya Drukker agreed both that there is a serious problem and that the incident was “blatantly anti-Semitic.” But unlike most people interviewed, she sees a silver lining. Perhaps the fact that faculty members were targeted will cause the administration to take more decisive action, she said.

“For the faculty it was definitely an eye-opening experience. The chair of the faculty meeting is an Orthodox Jew and he was personally attacked, so it’s now on a different level,” she said.

In 2015, the Israel on Campus Coalition (ICC) counted 649 anti-Israel events at colleges in the U.S. At Brooklyn College, Drukker said, they have “unfortunately become a too-common occurrence.”

The problem is “large and deep,” she said. “It’s definitely a huge concern that keeps me up at night.”

Jewish students at Brooklyn College, many of whom are either Israeli or Orthodox, with family members in Israel, and very few of whom are on the liberal, progressive end of the spectrum, anti-Zionism feels no different from anti-Semitism. “The students don’t see the difference,” she said.

While the administration recently revised the student handbook to address such protests, she says it’s the implementation that matters.

“It’s a systematic problem where we see students break the rules but there are no consequences,” she said. “It’s great to have the rules but the rules need to be enforced. We would love to see the perpetrators of this being identified and disciplinary action of some kind taken.”

Her Hillel also focuses on building bridges with other student groups by letting Jewish and non-Jewish students get to know each other in non-political settings. They’ve had an interfaith trivia night with all religious questions and host an annual Thanksgiving dinner for the homeless that this year got more than 170 students from across the demographic spectrum.

The largest of these initiatives is the weekly meetings of the “Creative Coexistence” club, during which 20 to 30 students get together to work on collective art projects. The Hillel students recruit by approaching other clubs on campus, and over the two and a half years since the project launched, Hillel students have gotten creative in their outreach, recruiting education students to work on a project on disabilities, and actuary students for a paint-by-number workshop.

But anti-Israel groups are reaching out to other student organizations as well, dovetailing with the growing embrace among progressive groups of the concept of intersectionality,” an argument that activists need to address the ways in which systems of oppression intersect. The concept has united student groups around common concerns about oppression and injustice. Thus, The Brooklyn College protestors were not alone in putting forth a wide-ranging list of demands.

But at Brooklyn College pro-Israel groups are growing as well.

Last semester sophomore Joseph Goldberg started the “972 Committee,” named after Israel’s calling code, to highlight media bias against Israel and provide positive publicity for Israel. His group of about 10 students once had a table featuring optical illusions to discuss the importance of seeing the Israeli-Palestinian conflict through a range of perspectives. Another info table session highlighted philanthropic actions taken by Israel to help other countries. Last week they gave out roses along with flyers giving out factual information about Israel.

Talking to students one-on-one has impressed upon him the extent of the misinformation on campus. One time a classmate told him that he doesn’t believe the Holocaust ever took place, maintaining the position even after Goldberg told him that his grandfather was in a concentration camp.

Hikind would like to see an even more direct approach, arguing that students need to counter BDS demonstrations head-on.

“The belief that if we don’t do anything it will just go away, it just doesn’t work that way,” he said.He thinks students need to hold counterdemonstrations, that the campus’ estimated 3,500 Jewish students (out of 17,400) need to show their strength. “We’re not talking about being militant, we’re talking about standing up for our rights,” he said.

“You have to stand up for your rights,” he continued, “otherwise they’ll be taken away.”

This story was updated on Wed. Feb. 24, at 5 p.m. to include information from the Israel Campus Coalition's report.