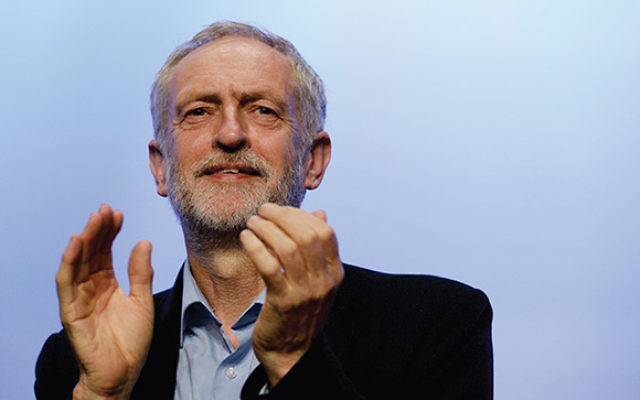 Britain’s Labour Party leader Jeremy Corbyn has equated Israel with ISIS, supports the boycott of Israeli goods, called members of the terrorist groups Hamas and Hezbollah his “friends” and supports the Palestinian “right of return.”

His party’s surprisingly strong showing in last week’s general election upset political pundits who had expected Prime Minister Theresa May to handily increase her party’s majority in parliament and stunned many in the Jewish community.

“I know many people who were alarmed at the rise of Corbyn,” Jeremy Havardi, director of B’nai B’rith’s London Bureau for International Affairs told The Jewish Week. 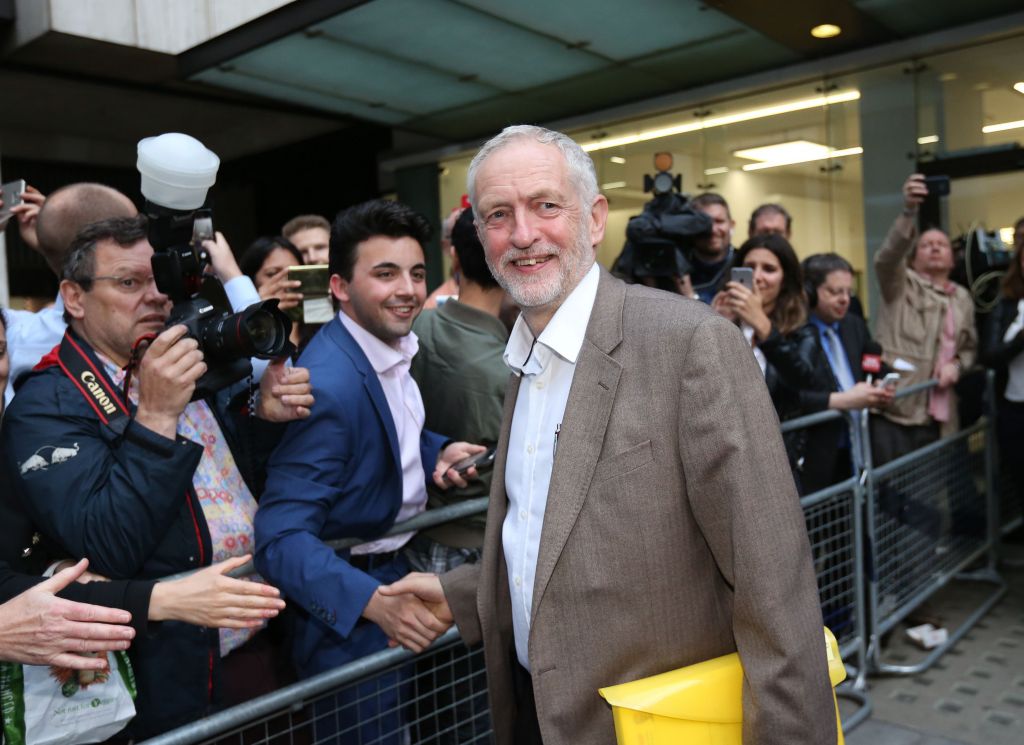 “There has been an increase in anti-Semitic incidents and some [Jews] feel there is a case for leaving [the country] because of security concerns,” he said. “I hear this all the time. People feel deeply insecure and wonder if this is their country anymore.”

But Louise Ellman, a Jewish member of parliament for the past 20 years who was re-elected with 85 percent of the vote, told The Jewish Week that although “we have a right to be concerned — we’re all concerned — it would be wrong to become alarmist.”

“Jewish people like everybody else are concerned about the future,” Ellman said. “But there are very strong groups in the Labour Party that are pro-Israel and want a Palestinian state with a negotiated solution. That is my position.”

“I want to make it clear, I don’t think he is anti-Semitic. But his position on Israel needs to be improved.”

She said Corbyn supports the creation of a Palestinian state before a negotiated peace settlement with Israel, but that “he is belatedly understanding” that his position needs to change.

“I feel the continued pressure within the Labour Party in supporting Israel and opposing anti-Semitism is having an affect,” she said. “I want to make it clear, I don’t think he is anti-Semitic. But his position on Israel needs to be improved.”

Michael Whine, director of the Community Security Trust, a British charity created to ensure the safety of the Jewish community, said that although British Jews “are increasingly concerned about terrorism attacks, they are not as scared as they are in France and don’t feel under the same pressure.” 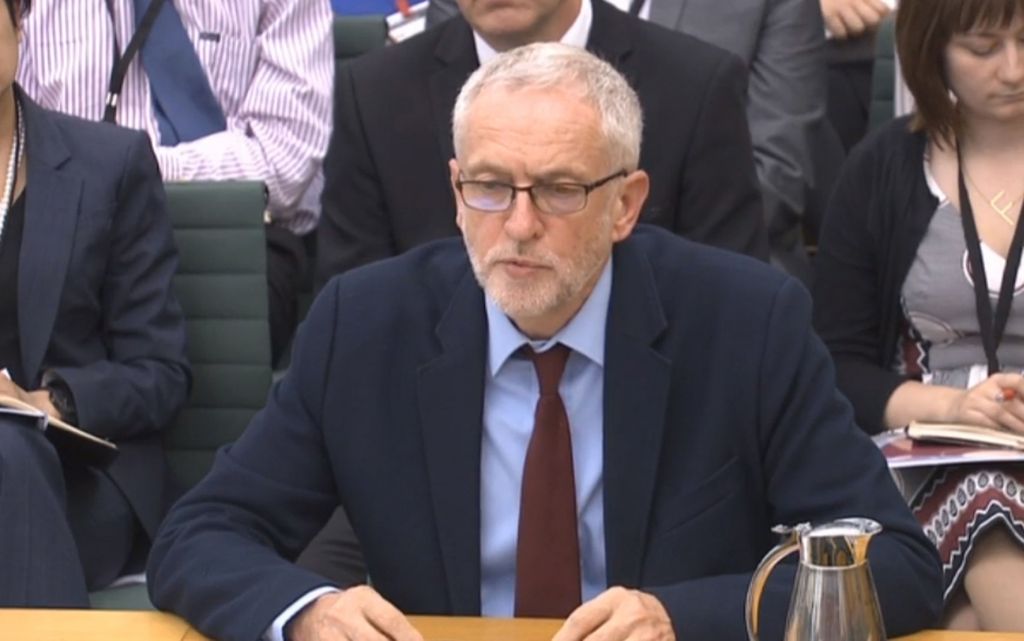 He said he, too, believes Corbyn is not anti-Semitic but is “naïve.”

“He was there to applaud a so-called liberation organization without having the wit to realize the people were promoting Hamas and Hezbollah,” he said. “There were several incidents in which he has done this sort of thing. He has been unfairly critical of Israel but that does not say anything about his feeling towards Jews.”

“Corbyn has encouraged far-left people with bigotries about Israel to think they can say things that have never been said before.”

Jonathan Arkush, president of the Board of Deputies of British Jews, which promotes and defends the religious and civil liberties of British Jewry, said that to understand Corbyn “you have to understand the figments of imagination and the phobias of the far left. For him the West is to blame for everything and America … causes the wrongs of the world. He believes it is responsible for fostering injustice, and consequently any allies of America like Israel are tarred with the same brush.”

Arkush said also that Corbyn “bears a share of responsibility for anti-Semitism in and around the Labour Party” because he has failed to address it.

“The far left used to be marginal, but in the same way the far-left sentiments of Bernie Sanders used to be marginal, they have now migrated too close for comfort to the center of the party. And Corbyn has encouraged far-left people with bigotries about Israel to think they can say things that have never been said before [in the party]. And bigotry about Israel always morphs into bigotry about Jews.”

Despite his Labour’s surprising showing, the ruling Conservative Party still outpolled it. But to remain in power, May was forced to form an alliance with the Democratic Unionist Party [DUP], an ultranationalist party based in Northern Ireland’s overwhelmingly Protestant community. Its 10 seats give May 329 parliamentary seats –three more than needed for a working coalition – and in the end Israel may also turn out to be the winner.

“The DUP is known to be sympathetic to Israel,” noted Malcolm Hoenlein, executive vice chairman of the Conference of Presidents of Major American Jewish Organizations. “This is in contrast to the Catholics, who are more sympathetic to the Palestinians.”

But observers believe that because of May’s slim majority in parliament, it’s only a matter of time before there are new elections. And there is no doubt that Corbyn, who proved to be an excellent campaigner, will again lead the Labour Party — to the consternation of Britain’s Jewish community.

It used to be that Jews in Britain voted Labour as routinely as Jews in the United States vote Democratic. But with Corbyn now at the helm of the party, polls indicate that only about 13 percent of the country’s 300,000 Jews voted for Labour. As a result, two Jews running on the Labour ticket in the most heavily Jewish districts in London lost their elections for parliamentary seats.

One of them, Michael Katz, who lost by just 1,000 votes, said he has no doubt that many of those who voted for him “were inspired” by Corbyn in part because of his socioeconomic policies. 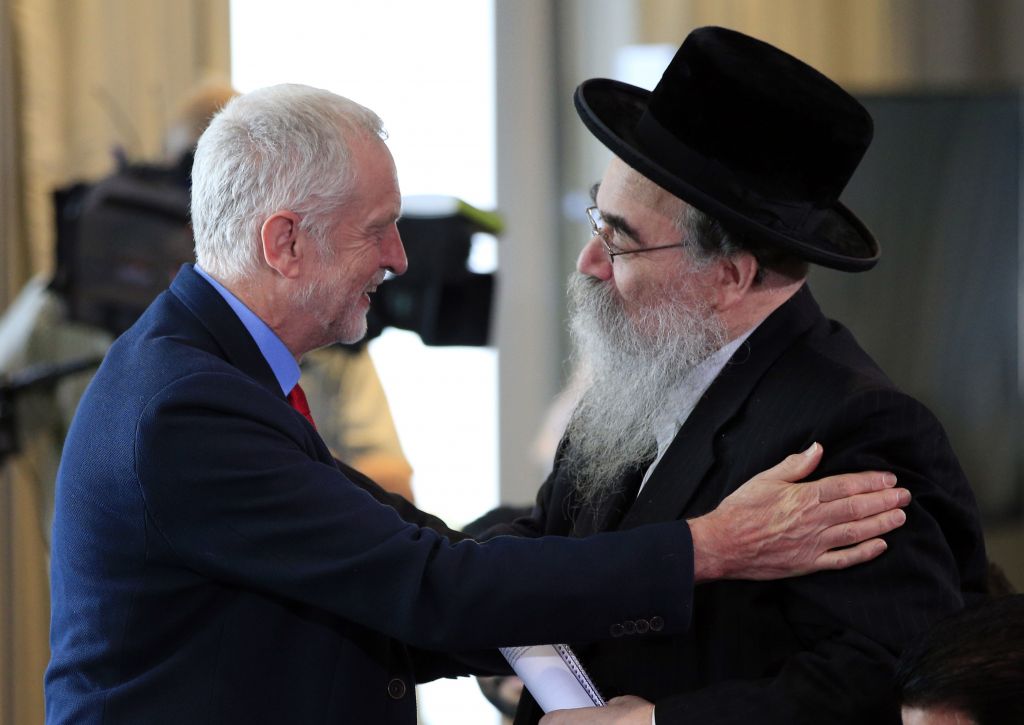 Corbyn meets Rabbi Pinter at the launch of the Chakrabarti report

“However, unlike most other seats, I had the added complication of those factors specific to the Jewish community,” he told The Jewish Week, noting that 17 percent of the district is Jewish.

Katz said that with the polls predicting a clear Conservative victory, his principle objectives were to “keep the seat in play for the next election, and restore the relationship between Labour and the Jewish community.”

But the “dominant” refrain he heard from Jewish voters throughout the campaign, he said, was: “I like you but I find it hard to vote for you because of the issues in the party. I was able to push back on some of the comments Jeremy made about Hamas and Hezbollah and the peace process … . I don’t believe they represent the party or the leadership. The problem is, he said this stuff and it is very hard to dissuade people — it was a major barrier to vote for Labour. It is folly for me to think it did not impact on the votes I might have had otherwise.”

“The Jewish community is not monolithic and many Jews grew up supporting Labour for its focus on health and education.”

The other Jewish newcomer who lost his bid for a seat, Jeremy Newmark, is an Orthodox Jew and chair of the Labour Party-affiliated Jewish Labour Movement. He said Jews comprised 21 percent of the district he was vying for and that he lost by 1,500 votes. He, too, said Corbyn’s leadership of the party cost him Jewish support.

“At many doorsteps I received a frosty reaction,” he said. “But the Jewish community is not monolithic and many Jews grew up supporting Labour for its focus on health and education. Many Jews, despite the controversy over anti-Semitism, were determined that they were not going to be politically homeless. The fact that I was the candidate and an active member of the Jewish community helped them remain within the Labour camp. … I would not have gotten this vote without the support of a significant proportion of the Jewish community.”

Havardi of B’nai B’rith suggested the reason Jewish parliamentarians like Ellman were re-elected and newcomers like Katz and Newmark were defeated is because she was fighting to retain her seat and they were seen as attempting to “give legitimacy” to Corbyn’s views.

“Many Jews believed they were trying to kosher Corbyn’s politics,” he said of Katz and Newmark.

Gilbert Kahn, a professor of political science at Kean University in Union, N.J., said Katz and Newmark are “committed supporters of Israel and serious Jews who opted to stand for seats because they are longtime Labourites, as are many Jews. My theory is they wanted to change the Labour Party and could only do it from the inside.”

He said that just like Jews in the United States, “you have to be involved in both parties so Jews will have leverage no matter who wins.”