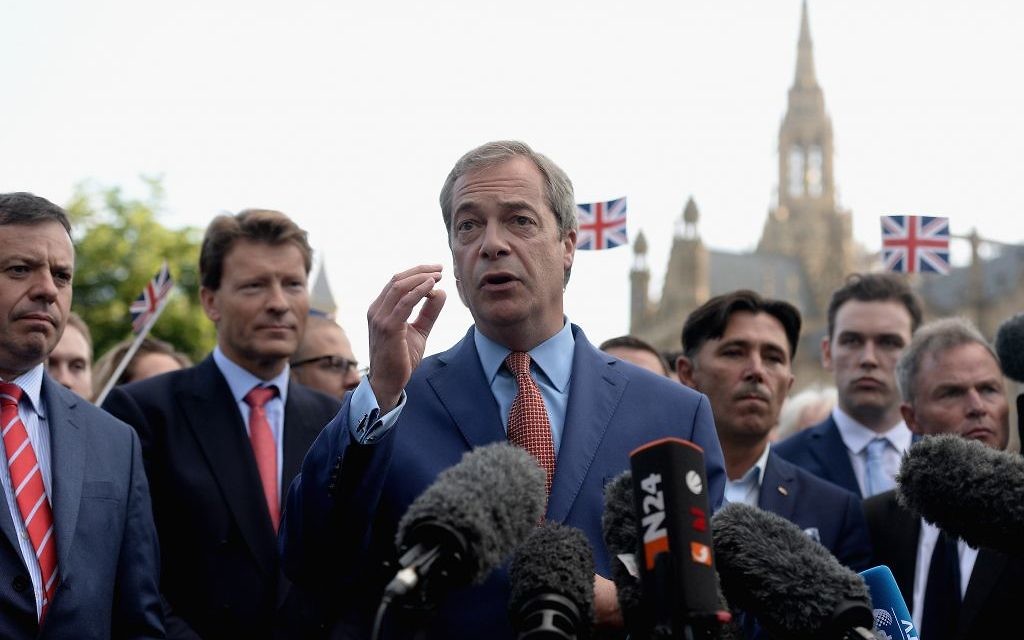 If there is one voice that everyone in Britain had heard within a few hours of waking last Friday, it was the ultra-right politician Nigel Farage saying that June 23 should become the UK’s “Independence Day.”

He was, to many, the face of the so-called Brexit campaign, and when the campaign went his way, it was his smiling face and the whoops of his supporters that played again and again in Britain’s media.

Farage’s UK Independence Party was a thoroughly fringe phenomenon until about five years ago. Since then, playing on fears of Brits about immigration resulting from Syria’s civil war, it has elbowed its way into mainstream politics, but nothing compares to its newfound status.

Its dream began in February, when Britain’s Prime Minister David Cameron, in the most ill-judged gamble of his life, set the date for a referendum that he hoped would reunify his Conservative Party and keep Britain firmly inside the European Union. A campaign followed that saw some Conservatives, UKIP and others, call for Brexit, opposed by a “stay” camp that included other Conservatives, the Labour Party and the Liberal Democrats.

The campaign itself elevated the status of UKIP, a party that appeals to many a xenophobe, which has been widely described as racist (though it says it isn’t) and which has so few scruples that it has been known to make alliances with some of Europe’s most extreme parties.

A couple of years ago, Farage averted a funding crisis for his European Parliament group by making a deal with the Polish Congress of the New Right, whose then-leader, Janusz Korwin-Mikke, has been quoted saying that “Adolf Hitler was probably not aware that Jews were being exterminated.” The agreement meant that Farage got one of the Polish party’s politicians to prop up his grouping.

Farage’s group, Europe of Freedom and Direct Democracy, today lists the Polish politician in question, Robert Jarosław Iwaszkiewicz — a man who is reportedly “convinced” that beating would “help bring many wives back down to earth” — as one of its vice-chairs.

When Farage gets his wish and Britain exits the European Union, his time as a European Parliament member will be over and he will no longer be working alongside Iwaszkiewicz. But there is no reason to expect his associations with some of the most ideologically unsavory individuals in European politics, to end.

Today, Farage can present himself as a prophet, the man who said for years that Brits want to leave Europe when nobody listened. “Isn’t it funny?,” he asked rhetorically in the European Parliament on Tuesday. “When I came here 17 years ago and I said that I wanted to lead a campaign to get Britain out of the European Union, you all laughed at me. Well, I have to say, you’re not laughing now, are you?”

He can suggest that if he was right about this, it’s worth hearing him out on other issues. Even to those who won’t actually pay attention to what he has to say, Farage has joined the big league of British politics. He won’t use his stage to make racist declarations, but he will use it to promote a vision of Britain that is less open, less tolerant and less diverse than it is now. The road to greater political power than he’s now embarked on will buoy all those who like to start sentences with the words “I’m not a racist but…” — and subtly change the British discourse to make such sentences more acceptable.

And so, for Jews in the country where I was born and raised, the Brexit story isn’t just the decision that was made in the polling station, but how the debate and outcome impacted on British society and politics. Worryingly, UKIP’s dizzying high comes as both of the main political parties are in chaos, making circumstances ripe for it to garner further support.

The referendum was intended as a unifying moment for the Conservative Party, to put an end to infighting over Europe and make it stronger, but this failed miserably. Cameron has announced that he will be leaving his post, and it’s clear that the party will have a hard fight to regain public respect. Meanwhile, Labour’s hard-left leader Jeremy Corbyn is facing a revolt from his own legislators, amid feeling inside the party and outside that it ran a disastrous “remain” campaign in the referendum. On Tuesday he lost a no-confidence vote held by his own legislators; 172 members voted against him and just 40 supported him. Foolishly, he insisted that he won't "betray" his party's members by resigning, and primly noted that the vote "has no constitutional legitimacy."

British Jews, whether they voted for or against Brexit, should be able to agree on one thing: that they desperately hope that both of the country’s main parties will elect new leaders and find a way to restore their credibility as soon as possible. Every day they wait is a gift to Farage.

Note: This article has been updated to include the results of the no-confidence vote Tuesday against Labour leader Jeremy Corbyn.