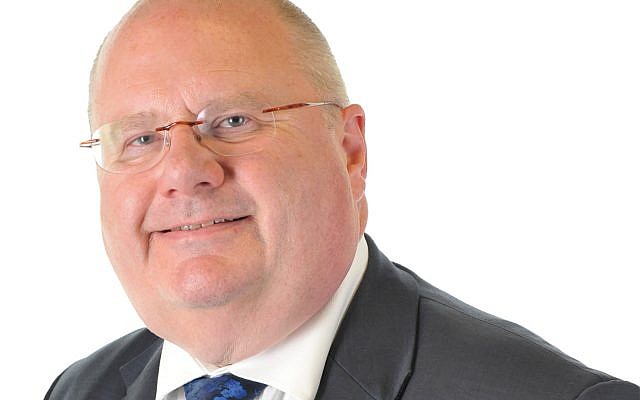 Lord Eric Jack Pickles: “A person of Jewish heritage would be at a lower risk of violence in London than in New York.” Wikimedia Commons

Lord Eric Jack Pickles, who has served as Britain’s special envoy for post-Holocaust issues since September 2015, works closely with the wide range of Holocaust academics, survivors and educational and social organizations in the United Kingdom. He was formerly a Conservative member of Parliament. The Jewish Week caught up with him by phone recently when he was in New York.

Q: You have said that as the number of survivors declines, we are going through a “sinister age” of indifference when it comes to Holocaust remembrance. Please explain.

A: It’s in the way people say [the Holocaust] didn’t happen or that the numbers are exaggerated. But the numbers show what happened. I’ve noticed in talking with friends about Holocaust remembrance across Europe that you come across people who say it was a long time ago, or it’s no different than what happened in Cambodia or the Great Plague in 1350 — why not just get over it?

I’m not sure how you tackle it but by a process of education and addressing the facts. We were dealing with a civilized government and people who did not ideologically believe [what Hitler said] but who just went along with it. There is a picture of Hitler in Vienna on a balcony and the picture zooms out and you could see hundreds of thousands of people. They were not all Nazis, but they were there and giving Sieg Heil [the verbal Nazi salute]. The Nazis were not monsters; they were ordinary people who did monstrous crimes to ordinary people.

Do you believe Labour Party leader Jeremy Corbyn is contributing to the rise of anti-Semitism in the U.K.?

Mr. Corbyn has always been on friendly terms with what most people would call terrorists. He has a long record of supporting extreme Palestinian causes, which may have led him to conflate Israel with people of Jewish heritage. Among the left this is a common problem. Add to this mix an instinctive pull towards conspiracy theories and you have the perfect conditions for anti-Semitism.

Anti-Semitic hate incidents in the U.K. hit a record high in 2018, with more than 100 recorded in every month of the year, according to the Community Security Trust (CST). According to the U.K. government’s official statistics, 12 percent of targeted hate crimes — some 672 offences — were against Jews. What is happening?

The numbers are party high because we record them. Very few counties record anti-Semitic crimes as a separate category — we thought the U.K. had to face up to reality. I would urge other countries to follow suit. Close analysis of the figures show that few of the U.K. figures relate to violence. This is not to minimize the problem; intimidation and unpleasant language have an unsettling effect. It would be fair comment to say that a person of Jewish heritage would be at a lower risk of violence in London than in New York.

What is the importance of locating the UK Holocaust Memorial and Learning Centre that is expected to be built by 2022 next to Parliament in Victoria Tower Gardens?

It would be right next to Parliament and the Avenue of Power and Downing Street — all the decisions taken by the British government would be taken within walking distance of the memorial. Also another reason is that when visitors go there, we want them to look up to the building of the Palace of Westminster where Parliament is housed and see that it is the bastion against tyranny. And those who work there will look out on the memorial and realize they have a choice — either to protect their citizens or persecute them. And they should remember that it was a compliant legislature that introduced the Nuremberg Laws [Nazi Germany’s racist and anti-Semitic laws].

You are the co-chair of the centre. How do you envision it?

It will be a learning center and there will be a solemn memorial that people can visit. Visitors will go through passage ways to an auditorium below ground and then look at how Britain dealt with anti-Semitism and the rise of Hitler. It will be completely balanced. It will talk of the Kindertransport and what happened to the parents of those children — how most were murdered — the anti-Semitism of the ‘30s and the blockade of Palestine.

Will it speak of the Exodus, the ship that carried 4,500 Jews — mostly Holocaust survivors — from France to British Mandatory Palestine but was prevented from getting there by the British military?

Yes, that is massively important. The reason we will deal with it is that we cannot say [anything critical] to countries in Europe seeking to paint their history in a slightly different hue than reality unless we are absolutely and brutally honest about ourselves. It also should be said that the Imperial War Museum nearby is redoing its galleries to integrate the Holocaust into the Second World War. If you think about it, WWII was a war of annihilation and the Holocaust was central. Toward the end, the Nazis sent to Britain unguided missiles that were manufactured by slave laborers.

You have said the Holocaust continues to shape our lives today. In what way?

It has shaped our attitudes since the latter part of the 20th century and to this day. It was such a significant event. Genocide had occurred before, but this was different in that the state used all of the powers of mass production for mass murder. They used mechanized ways of killing people. The level of education in Germany was the highest in Europe at the time and a lot of those in the murder squads had Ph.Ds.

I went on the March of the Living and a man was there who was in his 80s. He was with his daughter and granddaughter. He said this was his first visit to Auschwitz since he was last there in 1944. He said the weather was exactly like this when he arrived — a hot, sunny day with butterflies flying around. Don’t let anybody tell you it happened in a hole in the corner. Everybody knew what was happening — and I will try to take that into the learning centre.