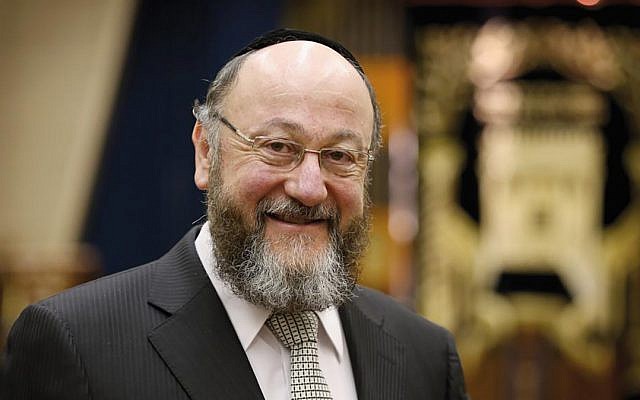 Two years ago, appearing before a committee in Parliament on anti-Semitism, British Chief Rabbi Ephraim Mirvis was asked his assessment of the problem in England. He took out a blank piece of paper and drew a black dot in the middle.

In an exclusive interview with The Jewish Week during a brief visit to New York this week, he said he explained to the puzzled committee members that while they focused on the black dot, 95 percent of the paper was white.

“I told them I’d be speaking to them about anti-Semitism, the black dot, but I wanted them to know from the outset that the 95 percent is also true”: overall, life was very good for British Jewry.

Today, though, Rabbi Mirvis acknowledged, “unfortunately the black dot is getting bigger,” adding that “the good is getting better and the bad is getting worse.”

The 63-year-old native of South Africa who formerly served as chief rabbi of Ireland pointed out that the Jewish community is growing — a rarity outside of Israel. (It is believed that more than 300,000 Jews live in England, though some choose not to check the “Jewish” box with the General Register Office.) In addition, synagogues and community centers are expanding, 70 percent of children in the community attend Jewish day schools and “Jewish people are succeeding,” he said. “We don’t encounter a huge amount of anti-Semitism in our daily lives and it’s mostly safe to wear a kipa on the street.”

But Rabbi Mirvis, who is soft-spoken yet outgoing, noted that anti-Semitism is increasing among some segments of British society. That includes “the far right and radical Islam,” he said, and most notably and disturbingly of late, the leadership of the Labour Party. Party leader Jeremy Corbyn is widely considered to express anti-Semitism in addition to his strong opposition to Israel.

Rabbi Mirvis has publicly spoken out on numerous occasions, expressing “deep concern” about the party not being sufficiently responsive to anti-Semitic remarks and behavior among its members.

One concern among British Jews is that if Corbyn, a secularist, becomes prime minister, he would end government subsidies for the country’s parochial schools. There is even worry that he would reduce diplomatic ties with Israel and that as a result a significant number of Jews would leave the country.

The current government has tightened its requirements on parochial schools to teach alternatives to the biblical version of Creation, which has become a problem for some Orthodox schools.

During his tenure, Rabbi Mirvis, who succeeded Lord Jonathan Sacks as chief rabbi in 2013, has focused on interfaith dialogue, increasing educational roles for women in Jewish life and calls for empathy and understanding for LGBT Jews. He produced a curriculum last year at the request of a number of Orthodox schools seeking guidance on how to deal with LGBT issues. “The feedback has been wonderful, and the curriculum has been adopted by many schools,” he said. “Tragically, there were signs of depression, self-harm and even suicide” among young people, which prompted his action. “Our religion calls on us to love one’s neighbor, to do no harm to others and to recognize the divine in all people.”

Asked whether a gay person could become an Orthodox rabbi, he responded simply: “Orthodox Judaism embraces Torah law. It is what it is.” That especially applies to a rabbi who must uphold Torah law, he added, while emphasizing the need for compassion for all.